A vision system assists in automated wheel fitting, solving one of the toughest final assembly challenges. Ever tried lifting 35-pound castings on to a machining line for a whole shift? Nor have the operators at TRW Automotive, because it has systems in place to do this

After receiving a contract to build a new line of heavy brake rotors – each weighing 35 pounds (15.8kg) – TRW Automotive of Woodstock, Ontario looked for a way to spare its operators the physical strain of having to lift all that weight to keep the line loaded with castings.

What engineers at the facility decided they needed was a vision-guided bin picking system – something that could automatically unload bins of castings and place them as needed onto the line. “We opted for a bin-picking system to save the operators from having to lift all that weight for a full shift, plus we wanted to give the operators more opportunity to change inserts, keep the whole line running and put more value into making parts rather than keeping the line fed with castings,” says Todd Denstedt, an automation engineer at TRW Automotive.

The firm had experimented with various types of binpicking technologies, including one that did a search routine at the bin, but found it lacking because it didn’t actually find parts. “During early trials with various systems, we would instruct the system that there should be parts in a particular quadrant [in the bin], just go down with a magnet and try and grab something, and keep trying until you find a part,” says Denstedt.

This ‘catch-as-catch-can’ approach would eventually find a part, but the cycle times were double what was required. “That type of bin picking has a 30 second cycle time and we needed something with a 15-second cycle time. We wanted to reduce capital and not buy two of these systems, so we investigated alternative suppliers,” he tells AMS. TRW’s JMP Engineering came up with a vision-guided robotic option.

Working with London, Ontario’s JMP Engineering as the system integrator, Cognex VGR and Fanuc Robotics as the vision and robotics suppliers, as well as Shafi Reliabot as the interface provider, TRW Automotive came up with a 2.5D solution to unload bins of castings as they come in.

Automatically mounting wheels in the correct position during continuous operation – not just on stationary, but also on moving car bodies – was, up until now, one of the most difficult tasks in the automotive industry. A recent development from ISRA solves the problem.

When automatically mounting wheels, a handling device positions the wheels exactly on the wheel hubs, where they are then attached with screws. To guide and position the robot, the 3D measurement system must determine the exact mounting position. The steering knuckles on the hanging car body do not have a defined position and the impact of the front wheels’ steering angle can vary significantly.

First, the position of the wheel hubs are measured three-dimensionally and the exact position of the joints are determined. The robot draws on this data to then mount the wheels using its tools.

Optimal sensors for the application

A system from ISRA Vision with the newly developed Robot Guidance Sensors (RGS) is used as the 3D measurement system. The sensors work according to the process of 3D. With integrated LED area illumination and LED-based multi-line projection, quickly alternating multiimage strategies can be accomplished for highly robust image processing. 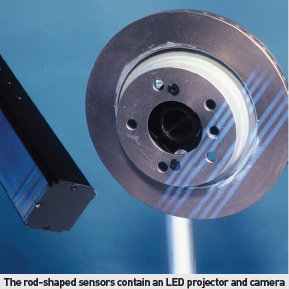 The compact construction of the sensors is also appealing.

The rod-shaped sensors contain, on the one side, an LED projector which creates a pattern of six lines, and a camera on the other. The rays of the two components installed lengthwise are diverted using mirrors and meet on the measurement object. Additionally, a surface illumination system is located in the middle of the sensor.

Because entire surfaces can be registered exactly using the RGS, first the level of the wheel hub is measured three dimensionally when mounting wheels. Determination of the joints is then performed separately. The process works robustly even with large steering angle impacts or with variations in the surface; from wheel hubs and brake disks that are shiny to those that are rusted or dirtied by rust film.

The RGS family provides the industry with a simple, compact tool for automating production. Exact 3D measurements and exact registration of object positions in spatial coordinates are in increasing demand. The sensors can be used in fi xed positions or on mobile robots. The family of sensors includes devices for working distances of 1500 to 100 mm and measurement accuracy up to 0.01 mm.

On-the-fly wheel mounting saves valuable time during assembly and opens up potential for the operator to reduce costs. The close cooperation between the two development partners, with their fi elds of competence in automation equipment and machine vision, has led to an outcome that is more than the sum of its parts.

How the camera system works

TRW Automotive installed two of the systems last year, each using a Fanuc 710ib-45 robot coupled with a camera and VisionPro software from Cognex Corporation. Shafi’s Reliabot software provided the robot/vision integration and robot guidance functions. The heavy rotors that are unloaded by the system are “somewhat oriented,” says Denstedt, meaning the rotors come stacked in bins from TRW’s supplier – however, usually the rotors would have shifted and interweaved during transportation.

“As soon as we get the bin in and close the door, we push a button and the robot activates itself and goes through a camera search routine to find all the stacks,” he says. “It knows there should be seven rotor stacks on the one rotor pack, and six stacks on the other – it will look for those stacks and find the centre position of each stack.”

The Cognex camera, mounted on the robot arm, finds the 2D (or X,Y axes) position of the parts, and an integral infrared sensor is used to find the top part of a given stack (or the Z axis). “Since the system is 2D and a half, the third dimension is there but it’s not calculated with vision. After we find the centre position of each stack, the camera has a laser depth centre which it uses to find the height of each stack. If it finds one stack is higher than the others, it will pick that stack down even, and begin picking in a routine where it will get past all the interweaved parts (one rotor sitting on top of another). It will find the ones that are best to be picked and then go down and pick the next one.”

The system’s robot uses a magnetic end effector to pick the rotor up and place it on the conveyor system, where it’s then sorted to one of three machining centres as required.

It’s then presented for another robot to pick up and place within the machining centre. The robot’s magnetic end effector also helps compensate for any changes in roll, pitch and yaw (up to a 20-degree lean) should the castings have shifted at all during picking. 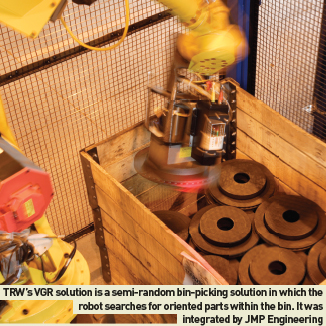 TRW Automotive opted for a 2.5D, or “semi-random” bin-picking solution, largely because it wanted to keep the technology simple. “True random is 3D technology, and it’s going to have to adjust the angle at which the tooling is going to contact the part,” says Denstedt. “Our solution is not entirely random. The rotors are relatively stacked, the bins hold the parts so they don’t fall all over the place, and they’re large parts as opposed to small components thrown into a bin. It does find each stack and rotor, but it would have trouble if the rotor was on a severe angle or on its end.”

Since TRW Automotive implemented the VGR technology on its heavy rotor line last year, Denstedt reports that uptime on the line has been excellent. “Operators don’t have to manage it, and they have more time to do daily routines such as checking quality, maintaining the line, and keeping the line clean. The operators have more time to do other jobs instead of having to constantly feed equipment. Previously, they would have to change an insert, run back and load the line up,” he explains.

Denstedt says that quality on the line is very high: “It’s a difficult rotor to manufacture, and we’re making it successfully with a lower number of employees. We’ve purchased another four units for additional lines launched last year and they’ve all cut down on the labour involved. It has definitely improved ergonomics. We would normally do this with manual lift assists, which creates additional cost.”

Additional VGR systems will be rolled out

Denstedt reports that TRW Automotive will be rolling out more vision-guided robotics solutions in the future. The company is in talks with its integration partners JMP Engineering for a 3D system, for more difficult rotors, including integral hub rotors where the hub is cast into the rotor.

“It’s a difficult rotor to stack and they often come to us out of alignment. Some rotors will be 30 degrees off horizontal, plus they have this large bore that we have to work around to grip it. It’s also the heaviest rotor we produce. A 3D system will allow us to use auto-loaders to pick these up instead of having to use manual lift assists.”