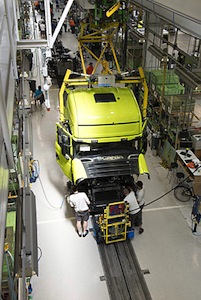 Sweden – Volkswagen has invested in the Swedish commercial vehicle manufacturer since 2000 and already holds a majority share in its voting rights and capital, but now seeks to bring it fully under the VW Group umbrella.

Leif Östling, VW’s member of the board of management for Commercial Vehicles, said the plan to fully integrate Scania “follows a compelling industrial logic”. He believes the move will “significantly improve the capabilities, efficiency and flexibility" of the commercial vehicles group which incorporates Scania, MAN and VW. According to Östling, this could include the implementation of a common toolkit strategy similar to that used for VW’s passenger vehicles.

However, VW said there were “no plans for structural changes” at Scania that would affect production locations, development centres and their associated workforces.

“What we have achieved with either Audi or Porsche we will attain with Scania,” declared Martin Winterkorn, group chairman.

The acceptance period for VW’s offer to Scania shareholders will run from March 17 to April 25, 2014.