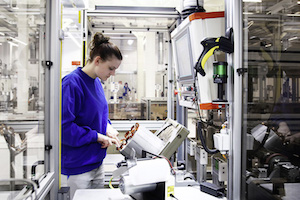 Germany - The OEM has started a new joint venture with QuantumScape - a start-up based in San José, California, that holds around 200 patents and patent applications for solid state battery technology. VW has promised to invest US$100m in the Stanford spin-off, and the two companies will now work together with the primary goal of enabling an industrial level of production for the batteries.

"We want to accelerate the commercialisation of QuantumScape’s solid-state batteries," stated Axel Heinrich, head of VW Group Research, who will also take a seat on the board of directors of QuantumScape. "And we combine forces to leverage Volkswagen’s experience as a production specialist and QuantumScape technology leadership. Volkswagen is thus taking another step toward a sustainable, zero emission mobility for our customers in the future."

Specifically, the companies hope to establish a production line for the batteries by 2025. Although the technology has shown some benefits over conventional lithium-ion technologies, such as higher energy density, enhance safety and better fast charging capability, solid state batteries have been more costly to make to date.

However, several companies and organisations are trying to tackle this problem. In May 2018, Toyota, Nissan, Honda and Panasonic started working together as part of Libtec - a research and development program focused on developing solid state batteries. In April 2018, the Fraunhofer Institute for Silicate Research (ISC) announced that it was taking part in a collaborative project called SOLID to develop a low cost method for mass production of solid state batteries.