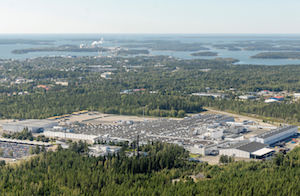 Finland – The company will recruit 1,000 extra staff at its Uusikaupunki plant ahead of series production of the Mercedes-Benz SUV from early 2017. Valmet Automotive says that, as well as car builders, it will hire 100 white-collar workers in production, production support and engineering services.

Valmet currently has 1,550 staff at Uusikaupunki and recruited 200 in 2016. With the addition of subcontractors, the workforce numbers almost 2,000 and will rise to 3,000 after the newly announced recruitment drive. Nonetheless, CEO Ilpo Korhonen noted that investments in robots and production automation are “playing a significant role” in the company’s development.

Korhonen stated: “Valmet Automotive’s long-term dedication and focus on improving its competitive position globally is now visible in a high-level volume of orders and the exceptionally large-scale recruitments.” The manufacturing contract for the GLC follows another for the Mercedes-Benz A-Class, of which Valmet has made over 100,000.