Image is everything when it comes to measuring and inspection, and the meticulous accuracy of the latest digital holography tools promise great leaps forward in quality, safety and performance

The new wave of digital holographic imaging technology developed at the University of Michigan is emerging as the fastest approach to accurate, rapid testing for the biggest, costliest and most complicated vehicle parts – engine, transmission and chassis components. Disciples of high-definition digital holographic metrology tout it as the next big thing in digital manufacturing, a game-changer that could revolutionise the car-making process.

Coherix, based in Ann Arbor, Michigan, has been in the vanguard of advancing the technology since 2003. Company CEO and Chairman, Dwight Carlson, describes digital holographic imaging technology as a “disruptive innovation” that can separate the winners from the pack. Its opticalbased inspection systems measure production line quality and improve the speed and precision with which component quality is measured. “Major product breakthroughs are always preceded by a major breakthrough in manufacturing process capabilities. And these are preceded by major breakthroughs in metrology,” Carlson observes. “If you can measure it, you can make it; if you can measure it better, you can design and make it better.” Before forming Coherix, Carlson was CEO of Perceptron, which developed laser-based metrology for automotive customers. 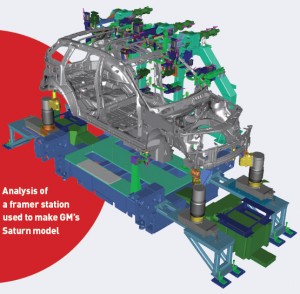 Pinpoint accuracy
According to Coherix, the new holography tools will help manufacturers dramatically reduce defects and improve warranty and performance by achieving tolerance levels of two microns or less. Just how tiny is that? A micron equals one-millionth of a metre (0.000039 of an inch). Automotive engines, for example, are designed with production variances of 12 microns or more.

Coherix’s ShaPix is a surface data tool that uses tunable wavelength lasers that illuminate surface areas. The tool produces 3D images of objects being checked when paired with optical equipment and software. The 3D images come out in three minutes or less, far more powerful than other traditional coordinate measuring machines which can take several hours, depending on complexity, and only capture individual points on components. Butch Dyer, President of the PEM Alliance – a newly formed Michigan-based Powertrain manufacturing consortium – says a long-term goal of digital holography is to reduce OEM powertrain operating and warranty costs by 30 per cent or more. “The introduction of high-definition imaging to monitor machining centre quality will enable manufacturers to dramatically improve launch times and increase operating efficiencies by achieving tolerance levels of two microns or less,” he said.

Million-point metrology
High-tech consultants call the digital holographic technology “ground breaking” and “transforming”. “Analog measuring takes data one point at a time. Digital holographic imaging changes the ballgame. It takes and measures one million points at a time. It’s so big it’s mindboggling,” says Tom Weber, industry analyst and consultant to major automakers and suppliers. Weber says the holographic metrology industry is at the “three blind men and elephant stage” and still is “trying to figure out what to do with all this digital capability. It may take a while, but everyone wants to go faster.” So far adoption of the technology is in its infancy, but Weber predicts growth as synergies build. For now, Coherix is working with companies such as Ford. GM, Chrysler, Bosch and TRW to perfect the technology. 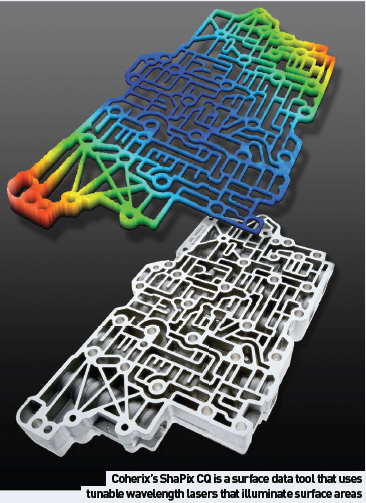 “Digital holographic technology allows you to take a lot more accurate measurements and these are made more quickly. You don’t have to do (other) testing,” says Tony Hain, associate provost-grad studies, at Kettering University, an engineering college in Flint, Michigan, closely aligned with GM.

Evidence is mounting that when digital holography is employed “it makes dramatic gains in processes, eliminates waste and cost, and overall warranty costs go way down. Quality problems go out the door. A lot of manufacturing problems begin to disappear,” Hain says.

Coherix is part of PEM Alliance and benefited from the $4.9m federal grant the consortium won in September to develop engine technology. It could save US automakers more than $1 billion annually, Dyer said. So far, the consortium involves domestic manufacturers. In addition to Coherix, members of the alliance include Chrysler, GM, Ford, Harley-Davidson, Kettering University, Roush Enterprises and the University of Michigan.

Allison Stephens, Ford Ergonomics Technical Specialist with Vehicle Operations Manufacturing Engineering, says ergonomic research is gaining more attention in the industry now than it did in the 1970s and ‘80s “reactive” period. Her department feeds data and study results into engineering design and production areas which affect the styling and positioning outcomes of everything from air bag placement to radio antennas, controls exteriors features. 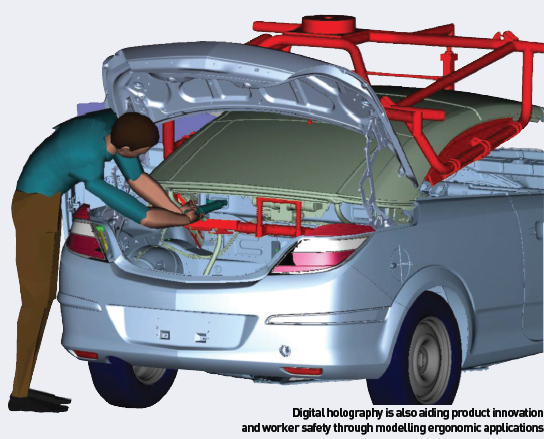 “In the past we waited for an injury or problem to occur. We don’t wait anymore. We’re looking for prevention tools. If a bad posture is maintained over time, you’re going to have wear and tear on muscles, tissue and bones,” Stephens said. Ford was perhaps the first automaker to create and develop its own motion capture technology process, Stephens notes. “We know we can predict and prevent injury. It’s an ‘ergonomics 101’ lesson.” Ergonomics gets more attention as an engineering issue, like quality. Every moment you don’t react, costs are going to be greater. Ford embraces the data coming out of lab studies. “When it says there’s a problem, we react and make changes. The impact is on health, safety and quality. You’re not going to do a good job if you don’t do a job with ease.”

Safety first
Borrowing from Hollywood’s animated digital film industry, Ford’s virtual program follows computer-animated characters called Jack and Jill as they do their jobs. The research is part of a joint University of Iowa, Ford and governmental study. The company believes its R&D efforts will reduce health-care costs and improve worker health and safety in the long term. That said, the sooner it comes the better. Dr Gary Allread, who heads up similar research efforts at Ohio State University’s Institute for Ergonomics, and who spoke at last October’s AMS Global conference in Dearborn, Michigan on the topic makes the point well. He applauds automaker efforts to improve worker safety and health. “We need to quantify risk exposure to employees – must we wait years to see who gets hurt?” 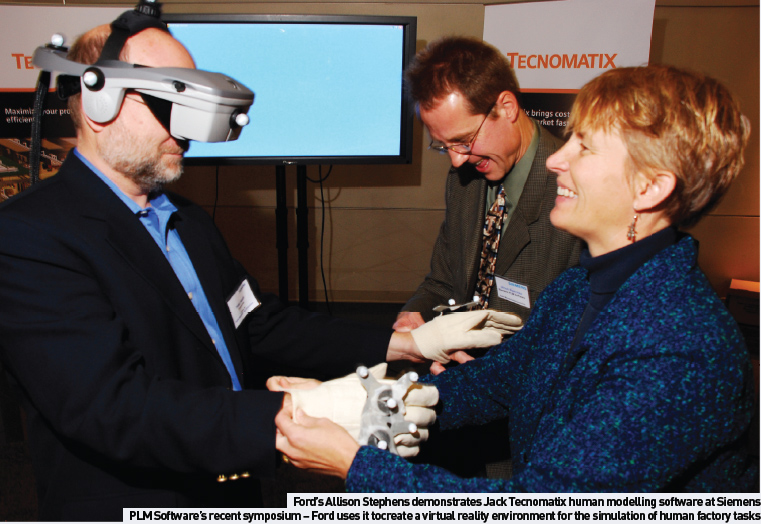