Standing the test of (development) time

Metrology, measurement and testing play a critical role in production development, where process accuracy and repeatability are paramount.

Quality control and testing have never been the most expedient of processes in the automotive manufacturing environment, but the advent of technologies such as digital inspection and 3D laser scanning have helped accelerate the development of new products and influence the design of subsequent production processes.

Such is the demand for innovation in this technology area that Metris, for example, has spent over ten years pioneering 3D laser scanning and 3D computer tomography scanning solutions. A significant milestone was reached recently when the company unveiled its next-generation LC60D CMM laser scanner that more than triples traditional scan rates for freeform and feature inspection.

This has been achieved by speeding up the image acquisition frame rate from 25 to 75Hz. In combination with a 15 per cent increase in laser stripe width and 17 per cent higher point resolution, the scan speed of the LC60D reaches 75,000 non-interpolated points per second. This allows manufacturers to compress the inspection cycle time for freeform parts, or boost the number of features that can be scanned in the same time frame. 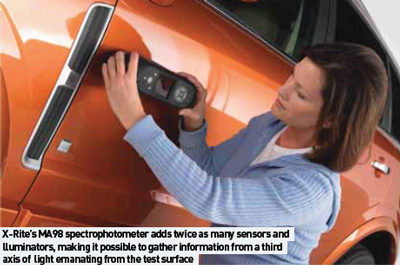 Another powerful aspect of LC60D is ESP3 (enhanced sensor performance), a capability that adjusts laser intensity settings automatically for each individual point on the laser line in real time. This enables the equipment to scan surfaces with varying colour or high reflectivity without any user interaction.

The Metris LC60D scanner fits any Metris LK or C3 CMMs (bridge, horizontal-arm or gantry types) for in-line or next-to-line inspection, and also fits most other CMM brands. Typical automotive applications for these metrology configurations are sheet metal, engine casting and trim parts.

Also new from Metris is Focus Inspection 9.1, a complete set of functions for digital surface and feature inspection.

In addition to proven CMM measuring technology, another metrology specialist, Carl Zeiss, also delivers modular, robot-based cell solutions that can be tailored to customer needs. Robotics and in-line measuring technology together create the potential for zero-defect production with foreseeable costs. With the joint benefits of flexibility and adaptability, an intelligent combination of robot and CMM technology provides the necessary symbiosis to react to shorter product and innovation cycles, as well as an increased variety of models in modern production environments.

Accessible from three sides, the lowered table on the Zeiss GageMax CMM permits fast pallet feeding and automated loading/unloading with a robot. This increases the integration possibilities of GageMax in interlinked automotive production systems. Furthermore, VAST technology turns GageMax into a fast and efficient scanning system that slots into production without consuming too much of that precious commodity known as floor space.

Genuine breakthroughs in quality-control technology have significant impact on the enhancement of production processes and build times, but the history books state that step changes in measuring equipment are fairly uncommon.

One recent exception to this rule is X-Rite’s XDNA colour inspection system that measures the colour of coatings, plastics and materials with ‘sparkle’, a characteristic that has confounded optical instrument developers for more than 60 years. Every major carmaker in the world offers a line of metallic flake and other effect paints, but these attractive finishes have caused serious headaches for production line personnel who do not have equipment capable of accurately quantifying the colours of effect coatings.

The need to accurately quantify the hue shift of effect paints has reached crisis proportions for carmakers trying to assemble body panels, bumper facias and other parts made by several suppliers and coated with effect paints that may not match under different illumination or observation angles.

Technicians on the production line may observe that a body panel and bumper fascia do not match properly, but they cannot back up their human perception with data that indicates why the mismatch is occurring. Consequently, some manufacturers have spent an inordinate amount of time and resources trying to determine the root causes of painting problems through trial-and-error methods. 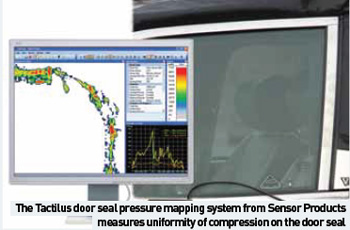 Until recently, companies that wanted to quantify the sparkle of effect surfaces had instruments that could measure colour in a two-axis plane when what they needed was data presented in three axes. Today, however, a technology invented by X-Rite detects and quantifies what is essentially the Z-axis of colour space by adding twice as many sensors and illuminators to a spectrophotometer to gather information from a third axis of light emanating from the test surface. In one case, X-Rite was able to unravel in two days a problem involving matching parts coated with effect paints that troubled a major carmaker for more than two months.

X-Rite’s MA98 spectrophotometer uses two illuminators and 11 sensors that measure 31 bands of the visible spectrum, from blue, representing the shortest waves in the 400-nanometer range, to red, representing the longest waves at the 700-nanometer range of the visible spectrum. During a test, the instrument measures the intensity and spectrum of light that is reflected, refracted (bent), scattered or absorbed. In the case of measuring paint, the analysis probes beneath the surface to yield clues to the coating’s chemical composition and application process.

Vehicle and component testing programmes have always delivered a wealth of information about product design and subsequent production processes. Today, the techniques for attaining and delivering this data offer increased sophistication and performance capability, leading to a host of new applications in the automotive field. 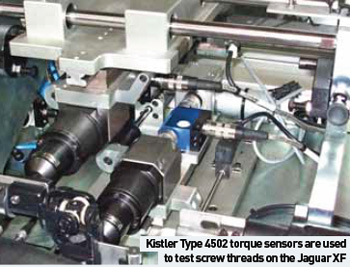 For instance, one major carmaker never previously tested pressure or measured load on its door seals until it acquired the Tactilus door seal pressure mapping system from Sensor Products. Now the OEM uses Tactilus on prototype models to see whether compression on the door seal is uniform and which areas have greater or less pressure. The real time pressure profiling system is quick and the images and measurements are useful in that they can be recorded and scrutinised for future analysis and manufacture. It may be necessary for the manufacturer to make changes to the door seal, its production or the actual body of the vehicle.

There are many examples of where testing in automotive applications can provide real production development benefits. For instance, a new test rig at ZF Steering Systems Nacam in Gwent, UK, is ensuring that screw threads in the universal joints for the new Jaguar XF are within specification. The test rig, designed by Nacam with technical assistance from Kistler, uses two Kistler Type 4502 miniature torque sensors to check that both threads have been formed correctly and are not too loose or too tight. This latter parameter is important as during installation on the car, the clamping screws are inserted after the steering column is in situ, and space is tight. If the threads are not within specification, the whole column has to be removed, an expensive and unwanted production operation for which Nacam has to pay.

The outputs from the torque and position sensors are sent to two Kistler CoMo View control monitoring systems that evaluate the signals and send a final pass/fail indication to the operator and the machine PLC. All data generated by the CoMo View system is transmitted via Ethernet to the central production control computer system for future production analysis.