Solutions on show at Automatica

This year’s Automatica, taking place in Munich from 22025 May, will allow visitors can follow complete value-added chains—from components to system, and from application to services—to gain a comprehensive view of new developments and their potential in their own work context. With a focus on bringing together users and developers of automation systems, it promises to be a key event for those involved in automotive production and component supply.

With robot sales during 2011 growing at 18%, and governments worldwide showing renewed interest in encouraging industrial innovation and achievement, Automatica 2012 will most likely exhibit a positive mood despite current economic challenges. As with most trade shows it is not the new product launches and displays that represent the real value for visitors–these are merely the means by which people are encouraged to cross boundaries and to see beyond the limits of their own organization or professional specialism. Show environments, if they are to fulfill their mission, must encourage exhibitors to explore future trends. ABB, for example will be showing its dual arm concept robot for small parts assembly. Developed to meet the flexible and agile production needs often found in the consumer and automotive electronics industry—and increasingly in other market sectors—ABB has developed an assembly robot that includes flexible grippers, parts feeding systems, camerabased part location and state-of-the-art robot control.

The potential of the robotic co-worker
The concept robot was created in response to requests from ABB Robotics’ existing customer base to develop robotic solutions for manufacturing environments in which humans and robots would be able to work seamlessly together. This 14-axis, dual arm robot is compact and intended to fit into spaces ergonomically designed for human workers. This allows the robot to be easily interchanged with a human co-worker when the production order is changed or a new layout is required. The concept involves a portable dual-arm configuration with a controller integrated into the torso. This enables it to be carried around easily and mounted into work stations with minimum installation requirements. Due to the intrinsic safety of the proposed robot solution, the requirements for performing a safety assessment of the installation are minimised. Normally, no safeguarding or enclosing of any kind is required, which allows for very fast installation, commissioning and relocation. This concept robot forms part of a research program aimed at evaluating new robotic solutions for modern manufacturing concepts (FP7 Rosetta). ABB indicates there are no immediate plans to introduce the robot as a commercial product, but it does illustrate the extent to which human-robot workplace interaction is now a key theme within automation.

Automatica 2012 visitors are likely to see this reflected in numerous displays in Munich. Danish supplier Universal Robots ApS will show its Bionic arm UR10, with its emphasis on the ability to integrate the new arm into the workplace in a way that causes minimum disruption. It seeks to build upon the flexibility that characterises all UR products. With a touchscreen graphic user interface and uncomplicated programming, along with sophisticated control technologies, the aim is to develop a new level of practicality and user-friendliness in sophisticated robotic technologies. Other robotic hardware will be shown by all the major names in the industry. Integration is one of the key factors in providing manufacturers with efficient robot-based automation. ABB will exemplify this by showing examples of fully integrated robot systems for a wide range of applications including welding, handling, palletising, machining, dispensing, painting, and press tending. An IRB 6640 robot, equipped with state-of-the-art computer display technology will demonstrate the full extent of the ABB Robotics Integrated Solutions capability. There will also be a display of ABB process and application equipment that is purpose-designed for integration with ABB robots and robot systems.

Automation and the challenge of alternative power sources
With electric vehicle production set to increase significantly, the challenges of reducing battery cost and increasing levels of performance have directed attention to the battery production process. The automated production of high energy storage devices is a necessary precondition for the further advance of electrically powered vehicles. Hall A2 at Automatica 2012 will feature special displays by the German Engineering Federation, focusing on immediate practical responses to the challenges of automating these processes as well as longer term glimpses into future technologies. In conjunction with the Rhineland/Westphalia Technical University, a display will allow visitors to explore the virtual factory. Many delegates from within the robotics and automation supplier sector will wish to explore the specific innovations and solutions demanded by these new technologies which could present significant market opportunity.

Material gains
Commentators have pointed to the automotive sector as the leading driver of large scale automated processes. New lightweighting technologies involving composite materials are dependant on automated production to assure quality at competitive cost. Automatica 2012’s organisers have chosen automated composite production as one of its featured elements. Another key area is measurement and inspection technologies. Vitronics will show sophisticated surface and weld inspection equipment. Its VINSPEC machine vision systems are already used in automotive to ensure quality and conformity. As well as the fast and reliable two- and three-dimensional recognition of type and position, the systems perform quality tests in the same processing step—simultaneously testing the surface, checking for completeness and physical presence, and performing measurement tasks on complex geometries without disruption. 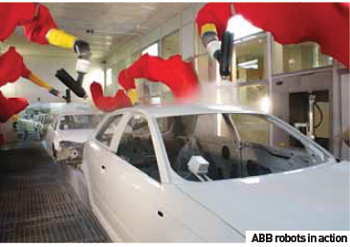 Sophisticated control system technology is critical to ensure efficient production, product quality and safe man/robot interaction. Kuka will show its KR C4 control module, with safety and movement controls integrated into a single homogeneous unit. This theme of man-machine interaction is likely to pervade the show, reflecting perhaps the coming of age on an industry that has finally got its message across—automation technologies are not competitors for human labour. Rather they are a cooperative enhancement freeing human labour from repetitive and programmable tasks and allowing full reign to their skills and judgment.

Physically this relationship is likely to be evident in many of the displays. Reis, for example, is likely to be among those displaying robotic positioning equipment capable of precisely positioning and securing components to be welded, relieving the welder of heavy lifting and unnecessary movement. Delcam is likely to showcase its Powermill2012 Cam system for high speed and five-axis machining—with several innovations including the option of flowline machining capability, where the tool path is divided between two drive curves with a constant number of passes ensuring a better surface finish. Beckhoff brings PC and EtherCAT control technology that forms an integrated method of workplace process control. All aspects of production—from individual machine or robotic element control to complete production lines—can be monitored and controlled through a flexible, user-friendly interface. EWM Hitech Welding Automation offers individual double robot MAG welding machines for serial production of profiles, which incorporate on-line laser measurement to ensure conformity and quality. Automatica has forged itself an important niche in the trade show circuit and the organisers now have reason to be confident that the 2012 event will consolidate its reputation still further.