As governments and vehicle-makers turn away from combustion engines, the time for EVs is now 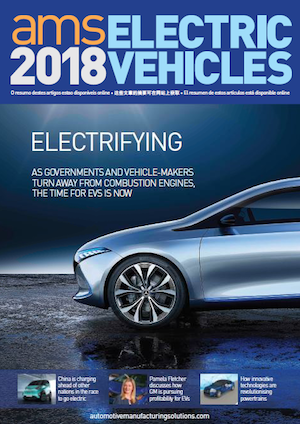 In this era of stricter regulations, commitment to the environment and energetic competition, alternatively-powered vehicles are central to every OEMs production strategy. While the take up of electrified vehicles over the past two decades has endured practical difficulties such as range anxiety and limited charging infrastructure, events of recent times, not least dieselgate, have tilted momentum. The industry is responding.

In this AMS special supplement we sets out the full picture the production processes making the EV future a reality; with reports and insight from the OEMs in transition to deliver the new era of vehicles and powertrains ...

New kids on the block Nick Gibbs provides an insight on the most promising start-ups looking to crack the electric vehicle segment, as well as those that are struggling

China charges ahead A new government scheme could have a big impact on China’s new energy vehicle market – already the largest in the world. Nick Gibbs reports

Rewriting the rules? Already struggling to hit production targets, Tesla has continued with new model launches and is diversifying its activities. Has the company bitten off more than it can chew? Ian Henry investigates

Pursuing profitability Since its 2009 bankruptcy, GM has reinvented itself as a high-tech leader. Nick Gibbs speaks to Pamela Fletcher, VP of global electric vehicle programmes, about bold electrification plans

Heavy on the hybrids Electrification strategy at Ford is set to expand significantly after a series of production announcements. Ian Henry takes a look at the details

A bigger bet on BEVs Almost all major vehicle manufacturers have well established battery-electric vehicle strategies, but Toyota is a relative newcomer to the segment. Lem Bingley provides insight

Raise a glass Gareth Price visits The Transparent Factory, Volkswagen’s unconventional facility in Dresden repurposed to assemble the eGolf and become the showcase for the OEM’s e-mobility philosophy

Integrating i vehicles Separate production lines are currently used to build conventionally-powered vehicles and BMW i models at the company’s Leipzig plant, but this could soon change. Michael Nash investigates

Packing in the power As JLR steps up its electrification efforts, Mike Farish takes a look at a pilot production line for battery packs, developed together with WMG

Closer to commercialisation FCEVs have lagged behind other EVs, but upcoming models could help that to change. Lem Bingley reports