KUKA Robotics and Boll Automation use Binspect vision system to optimise production of axles for commercial vehicles, helping to reduce the physical strain on employees and to increase efficiency 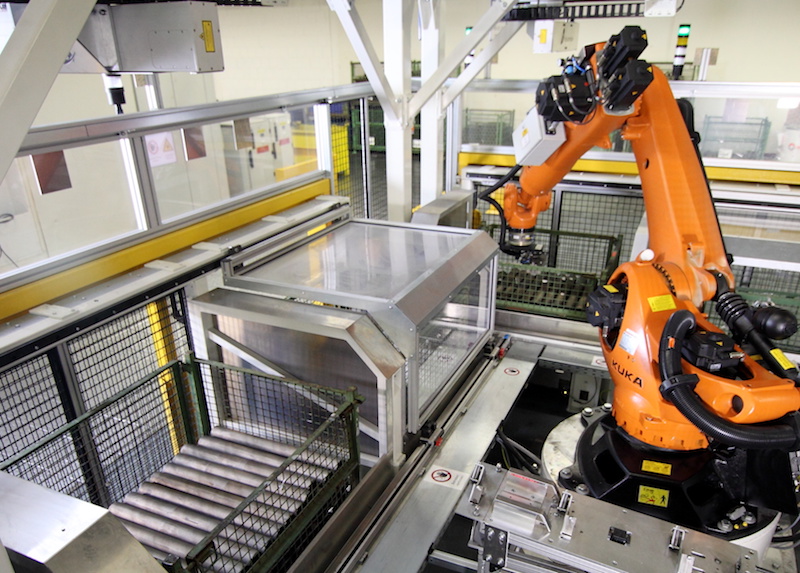 In recent decades, commercial vehicle manufacturers have experienced rapid changes in the production of axles. The demands on drive-train modules in terms of safety and consumption have been continually increasing along with the complexity of the components. This has resulted in continuous optimisation of the production chain. Boll Automation has developed an automation solution for leading commercial vehicle manufacturer Daimler AG. In it, a KUKA robot cooperates with the Binspect vision system to optimise the unloading of tubes for the production of axles. This solution has helped to reduce the physical strain on employees and to increase efficiency.

The selected location is a plant which manufactures axles for light to heavy-duty commercial vehicles. The goal was an ergonomic automation solution which significantly eases the workload of the employees. Beyond this, a flexible jointed-arm solution and greater economic efficiency than with manual unloading,were desired. “We met these requirements through a system solution combining a KUKA robot and the Binspect vision system in a bin-picking system,” reports Kai Helmstetter, technical director at Boll Automation.

Intelligent measuring systemBoll Automation’s core expertise is the combination of robotics and vision systems with 100% visual inspection in manufacturing (for the automotive industry and other sectors). As a system partner of KUKA, the company offers the automotive and commercial vehicle industry the bin picking system along with the appropriate robot technology. At the Daimler plant, the system was equipped with a KUKA robot of type KR 210 R2700 prime.

“In terms of handling weight and reach, this robot type has proven to be ideal in initial investigations,” stresses Helmstetter. The streamlined and light robot from the KR Quantec series is extremely stiff and precise. Having a payload capacity of 210kg and a reach of up to 2,700mm, the robot is characterised by shorter cycle times, utmost path accuracy and outstanding energy efficiency. KUKA’s KR Quantec prime robots are also optimised with a view to minimising space requirements and extend the economical reach range at the same time. They are thus particularly suited for efficient manufacturing in tight production spaces.

Laser triangulationIn the bin-picking system, the Binspect vision system is installed in a stationary location above a container with unsorted components. “Binspect detects the component position using laser triangulation and delivers the position data of possible gripping points on the components,” explains Helmstetter. Based on these position data, the accessibility is checked and the path for the KR 210 R2700 prime into and out of the container is planned so that there is no risk of a collision. To ensure a safe and reliable process sequence, a comprehensive assessment of the interference contours of the robot and gripper in relation to the container and the peripheral equipment of the system is carried out. Finally, the production parts are safely picked up and then fed directly to the next production process. Unlike mechanical gripper fingers, the magnetic gripper that is used ensures that tubes lying close together can be picked up without any difficulty. It also enables tubes of varying diameters to be handled without changing grippers.

Sequence without downtimesThe process in the bin-picking system begins with the scanning of a newly delivered bin. The result is simulated on the monitor and the collision-free path of the robot is planned within tenths of a second. The robot then removes the tube that is easiest to access from the bin using the magnetic gripper and sets the tube down at the inspection station. Here, the station identifies the type of tube and signals the robot to set it down on the carrier. If a tube of the wrong type is detected, the incorrect tube is offloaded via a reject rack.

Once the last tube has been removed from the bin, the Binspect vision system automatically moves to the next full bin in order to continue unloading tubes without interruption. At the same time, the empty bin can be exchanged for a full bin during operation in order to avoid downtimes. In addition, the next step of the process chain seamlessly follows on from the unloading process. The system solution provides a wide variety of advantages, including: stable operation even in harsh environments, no set-up times; full use of the flexibility of a robot cell; no impact from extraneous light thanks to 3D scanning; and a design according to protection rating IP65. Innovative software solutions ensure brief, practicable cycle times with high system availability.

Robot integration becomes easyThe end-customer-friendly automation of machine tools requires the integration of industrial robots in machining cells. This means modifications that have to be made by the operator, eg, retrofits are either applied to the robot automatically or at least ergonomically comply with machine operation requirements. 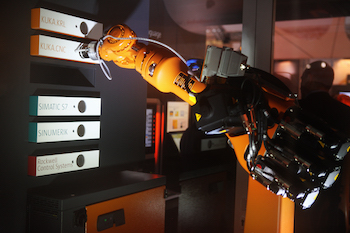 Compared with manual loading and unloading, the advantages of using a robot mean they quickly pay for themselves

Furthermore, all cell-related operator actions, including those affecting the robot, must be possible from a single operator control unit in accordance with the ‘single point of operation’ principle. This includes interaction such as normal operator control, safe retraction, teaching and diagnosis. Machine tool and robot programs can be run in parallel channels on the Sinumerik Operate user interface. KUKA Robotics and Siemens Drive Technologies set themselves the challenge of presenting a correspondingly simple and efficient solution environment.

Compared with manual loading and unloading, the advantages of using a robot quickly pay for themselves. Examples include the high quality of workpiece positioning, the option of a third fully-automated shift and short conversion times for flexible production. The thing that has often stood in the way of automation by means of industrial robots was the lack of acceptance on the part of the operators. With their shared handling solution, based on mxAutomation and the open interfaces of the Sinumerik controllers, KUKA and Siemens have set new standards.