Safe and sound with servo

A collaboration between ABB and truck cab manufacturer Crenlo has resulted in a faster, robotic, servo spot-welding system, one that ably meets the plant’s comprehensive safety requirements 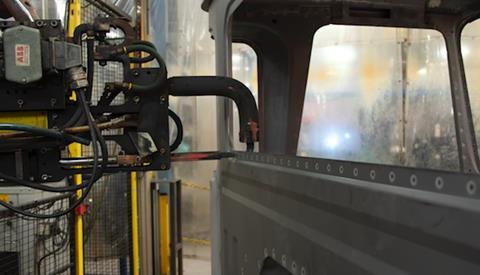 Safety isn’t just a priority for Minnesota-based Crenlo, it is a way of doing business. Over the past seven decades, the company has been perfecting the engineering and manufacture of truck cabs and roll-over protective structures for heavy-duty vehicles used in agriculture, mining, forestry and other industries.

Crenlo’s dedication to help build the safest possible vehicles was the driving force behind the introduction of a new line of cabs designed for the refuse collection truck industry. As the sixth-largest private employer in Rochester, Crenlo has an impressive engineering and manufacturing infrastructure, with 725 employees, 23 industrial robots across two facilities handling tasks such as press tending, machine tending and arc welding. The robots, all but one of which has been supplied by ABB, have been added over time, some in operation for as long as 24 years.

However, Crenlo faced a problem. A slew of accidents involving refuse trucks over the past few years in North America has resulted in rigorous design and safety standards that the company had to meet without compromising on its budget. Despite the many hard automation systems, Crenlo has to operate many processes manually; typically those that require extensive handling, like parts of a complex geometry, or smaller parts that require intricate processing.

“These new cabs require 2,000 spot welds,” says Jeff Petersen, Crenlo’s robotics and weld engineering manager. “We performed preliminary manual spot weld testing on some smaller cab components and we quickly saw that it would be a manually intensive process. A roof reinforcement piece we tested took two people an hour-and-a-half for 98 spot welds. The team determined this was too long and not good ergonomically.”

Crenlo considered installing a standard robotic spot-welding system, but the complex structure of the truck cabs meant that the system needed to access far more weld points than they were currently achieving. It was concluded that no system could get to all 2,000 welds in one stage. The project team, with Peterson and lead manufacturing engineer Brent Sharpman, conducted an analysis and found that if the truck cab could be repositioned during the welding process, the robot could get to enough of the welds to be a viable option.

The challenge remained to design a system that repositioned the robot effectively but one that was neither very complicated or capital-intensive. The cab was too large to achieve the necessary part movement with a standard workpiece positioner, like that used in Crenlo’s arc welding cells, and adding a second robot to hold and reposition the cab was beyond the cost parameters.

“After struggling with it for a while, a light came on and we thought that a really clean idea would be to rotate the part with a fixture in the floor, sort of like a lazy Susan, turning the cab in a controlled way so that the robot could sequentially get to as many welds as possible,” says Petersen. “We talked to ABB and the idea of servos and a robotic servo spot welding system first came up. After further review, that is the route we decided to take.”

A servo is a motor coupled to a sensor that provides feedback through a reduction gearbox, allowing for precise position control. Robotic servo welding uses the motor and an encoder as a seventh axis to control the opening and closing of the welding tip. The tip is closed as the torch moves from weld to weld, opening only as much as needed for each individual spot weld.

Two servos were used in Crenlo’s system. One was used to control the welding apparatus, and the other as a full servo positioner in the floor to rotate the flat platform on which the truck cab is fixed. An ABB IRC5 controller controls the three primary system components: the movement of the IRB 6650 robot, the operation of the spot-welding equipment, and the movement of the positioner to present the truck cab to the robot in the optimum position for each weld.

“The system provides a very controlled, precise movement of all parts,” says Dave Minkebige, the ABB manager who worked with Petersen on the project. “In addition to the coordinated movement of the cab on the floor positioner and the robot, there are a lot of other benefits of servo spot welding, including a cycle time that is 30% faster than a pneumatic gun, improved weld process control, lower operational costs and a longer welding tip life.”

A typical pneumatic gun has a +/- 10% control in tip pressure, which is a direct result of the plant air supply. A servo gun properly tuned has a +/- percent or better control in tip pressure. As an example, given 1,000lb tip force required for a weld process, the pneumatic gun will delivery anywhere from 900 to 1,100lb, while a servo gun will deliver from 980 to 1,020lb. 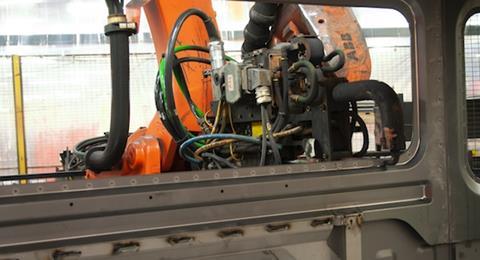 Crenlo can do 600 welds per cycle – a great use of resources, especially since typical automotive spot-welding systems achieve only 10-12 welds per cycle

In addition to the cost benefits, a more consistent pressure allows the weld parameters to be more tightly tuned, improving the control of the welding process and the overall quality of the welds. Better weld quality leads to superior structural integrity, the trademark of Crenlo products.

“There continued to be some pushback from our management team until it became clear that the fixture holding the cab wouldn’t need to be all that complex. In reality, the cab is just pinned at the bottom of the rotating plate,” explained Petersen. “Once the relative simplicity of the entire system took shape, it gradually gained the support of the entire team.”

The support was justified. When the system was initially installed it was able to do 488 of the 2,000 spot welds. The welds that the robot couldn’t do were smaller sub-assemblies, or joints that were covered up when affixed to the cab.

By gaining experience with the system and finding ways to move both the robot and the cab, the servo spot weld system is now able to do approximately 600 spot welds directly on the cab in one cycle – a more than 500% increase from the 98 welds accomplished initially. This method of processing is unique in the spot-welding industry.

Many of the welds the robotic spot welder is not able to do directly on the cab are done in batch mode by a robot on another workstation. Initially these welds were done manually as subcomponents, prior to the full cab weld. Not only is the quality of the welds far more consistent, but the speed gains the robot provides are almost beyond measure.

“These new cabs require 2,000 spot welds …. We talked to ABB and the idea of servos and a robotic servo spot welding system first came up. After further review, that is the route we decided to take.”

“It takes 14-and-a-half minutes to do the 600 spot welds on the cab,” says Petersen. “We don’t really know how long it would take to do that manually, but for comparison sake, the roof reinforcement piece we tested initially has 98 welds that took two people 90 minutes to weld, this takes the robot three minutes and 10 seconds, and eliminated the ergonomic concern.”

There are many secondary benefits to the robotic spot welder; none more significant than minimising the potential safety and repetitive motion hazards that could afflict welders manually applying that many welds.

The traditional method of spot welding involves a manual welder and a hand-held gun weighing several hundred pounds. Carrying the welding equipment while climbing and bending in and around the cab to reach the welds would cause physical stress that can lead to lifestyle issues in the long run. Fortunately, the robot performs the most difficult welds, leaving those that are more ergonomically placed to manual welders.

“Crenlo has always been willing to introduce industrial robots to areas of their operation where the benefits made sense, and, though this was new technology to them, they were open minded about introducing the robotic servo cell,” says Minkebige. “We took an operation that would have been incredibly cumbersome to handle manually, and significantly reduced the cycle time, improved the quality and consistency of the welds and provided the flexibility to handle different cab configurations in the future.”