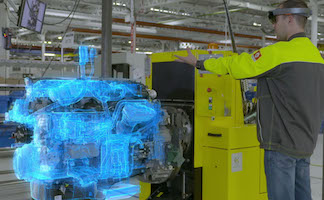 France - A team of researchers at Renault Trucks is examining potential benefits from 'mixed reality' technology for the heavy-vehicle maker's engine manufacturing operations.

Working in cooperation with virtual- and augmented-reality specialists Immersion, the team has set up a prototype system that uses holographic techniques in a quality control process at Renault Trucks' Lyon engine plant. Whereas augmented reality transposes information over real image when shown on-screen, mixed reality technology adds virtual objects into a real environment in the form of holograms, with which users can interact.

Bertrand Félix, the Renault Trucks engineer behind this project said, "In practice, quality control operators will wear Microsoft HoloLens smartglasses in which all the digitalised engine parts will be integrated. Via the glasses and mixed reality interface, operators will see decision-making instructions that will guide them through the most complex control operations. At the moment, operators working on control points are still using paper instructions."

The engine parts that are digitalised and superimposed over the actual engine, can be viewed separately, guiding operators through the quality process stages one-by-one. Operators work hands-free, receiving in view additional decision-making information, such as plans and verification and assembly instructions.

The technology both reduces and improves quality control operations, Renault Trucks says. It reduces the cognitive load of operators as well as speeding up their training.

Phase one testing starts this month and other applications envisaged for a second stage, include assistance with assembly or repair. Renault Trucks has set itself a target of developing a paper-free, digitalised manufacturing process with the plan that the mixed reality prototype to be rolled out by 2019-2020.