The pace of electrification is getting ahead of the time taken to train the engineers with the skills needed for an auto industry transitioning to producing EVs. 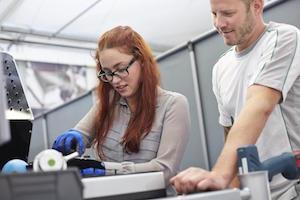 After the demise of its indigenous car industry in the 1990s, the UK is positioning itself for a leading role in the battery-electric, software-driven automotive industry of the future.

But this knowledge-based economy and the birthplace of lithium-ion battery technology is running up against a shortage of the necessary skillsets to get it there – digital and electrical.

While the auto industry is a major spender on R&D, the pace of electrification looks to be getting ahead of the training of the engineering profiles needed to take it forward.

“It’s one of the biggest issues we face,” said Mike Hawes, chief executive of the Society of Motor Manufacturers & Traders or SMMT, the body representing the UK automotive industry.

It’s a significant statement given the UK is simultaneously grappling with ongoing threats to trade arising from Brexit on top of the semiconductor chip shortages and supply disruption bridling the industry globally.

It’s also one that echoes concerns of the SMMT’s EU-wide equivalent, the ACEA, which has called on governments to address the economy’s need for an updated skills mix in continental Europe too.

“Up until 18 months ago if we put a job on the board we would have loads of applicants,” said Laurence Drake, managing director of DAF Trucks, the long-running leader in UK heavy commercial vehicle sales.

“At the moment we have five jobs open and we are struggling. We have had one of those open for three months for an engineer. We just cannot get anybody to apply.”

Drake was speaking on a panel to mark the launch of the SMMT’s 2022 report on the competitiveness of the UK auto industry.

Professor Jim Saker, director of the Centre for Automotive Management at Loughborough University told Automotive Manufacturing Solutions that the skills shortages would take at least several years to address as education and training realigned with the industry’s new priorities.

“The shift towards EV’s throws down an academic challenge based around electrical engineering which has historically been regarded as a separate degree path. Most universities are adapting to accommodate this but there will inevitably be a supply issue for a few years.”

DAF Trucks’ Drake was one of three senior automotive executives at the SMMT event to flag anxieties around skills and recruitment. While making very different vehicles, Lotus’s Managing Director Matt Windle and Chairman at Ford Motor Company, Tim Slatter, concurred on the challenges they face.

What set the truckmaker apart however, Drake said, was the fact that no clear winner has yet emerged as a replacement for the internal combustion engine for heavy commercial vehicles.

Ford’s Slatter said his company in the UK had been cultivating many of the skills it needs internally and said it had benefited from the cooperation of the government on the issue.

Lotus has also taken a direct approach, setting up an in-house academy with a simulated work environment for trainees but as electric powertrains continue their ascent, Windle said it would take a much broader nationwide push to get around the problem in the longer term.

“We’re nowhere near the scale of Ford. We never will be. But it makes me very happy to hear that Ford is going full electric with passenger cars because that drives an industry change as well which we benefit from in skills,” Windle said.

Roles in cyber security, controls, onboard and offboard technologies plus management of battery recycling were specific roles Windle said needed “focus” in terms of talent development.

“At Lotus, we have just under 2,000 people and in the UK now I think we have just under 300 vacancies,” said Lotus’s Windle who is overseeing something of a golden moment in the company’s history with a major sales rebound in 2021 thanks in part to a refreshed model line-up, he said. The company has also been investing in updating its UK manufacturing footprint, as well expanding globally with production in China (the carmaker is majority owned by China’s Geely).

His announcement that all new Lotus model launches from 2023 would be battery electric will only add to that pressure to build the necessary know-how.

“I think there is a real opportunity for us through the government, through the education system in the UK to invest in those jobs because let’s be honest, those people will be exported in the future, or, even better for us, that will keep attracting businesses to come to the UK because we’ve got that skill set,” Windle said.

All three companies said they participate or have participated in the UK’s apprenticeship scheme which provides hands-on training for people with high school to Master’s degree level education, the cost of which is subsidised by the government.

But the threat of potentially chronic skills shortages has prompted them to go further, devising in-house training abd requesting tailor-made training courses from external education providers. DAF, for one, said it had been unable to find enough suitable electrical-related courses available to send staff to.

Both Ford and Lotus have done some outreach work in schools and Ford has previously opened the doors to its Dunton research centre to spark an early interest in this field to children in their first years of school.

“You need to be talking to children who are six, seven to get them engaged in engineering, in automotive. It’s such a valuable business to the UK salary wise and the benefits to the exchequer as well,” Windle said.

”I think engagement is important. I think most businesses are finding they are having to take that on themselves.”