Magnetic filtration is widely used in the automotive industry within OEMs and Tier 1 and 2 suppliers for the manufacture of powertrain and engine components. It overcomes the problems associated with traditional filtration systems through its ability to extract sub-micron ferrous contamination without the need for any consumable items. Traditional filter systems such as cartridges, candles, paper filters and hydrocyclones typically only filter out particles >10 microns.

Utilising high intensity magnetics removes the reliance on these consumable items and this can reduce the cost of filtration and downtime. Magnetic filtration systems ensure that fluids run cleaner and retain their qualities for longer. In some applications, fluid life can be extended by up to 10 times. 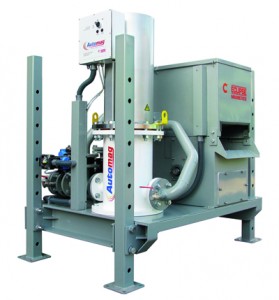 Purity of the grinding fluid is critical to producing a high quality finish within a precision components operation, and here we can take a look at the results of fitting magnetic filters at a number of leading manufacturers.

However, particles below 50 micron were not being removed in this system, with the result that it was causing damage to fluid pumps and gun drills. In addition, the ‘clean tank’ would quickly become contaminated with ferrous particles and required regular cleaning, causing 24 hours of downtime in each instance. Installing a magnetic unit has ensured that nearly 100% of ferrous contamination is removed from the oil down to the smallest sub-micron particle level. This has increased the lifespan of the cutting oils, reduced product rejects and extended the lifespan of gun drills.

In another example, Permoid Industries, which produces diesel fuel and hydraulic tanks for construction vehicles, found that paper filters in its wash system for cleaning the interior and exterior of fuel tanks could only remove particles down to five microns. This meant that smaller particles continued to be re-circulated, causing damage to the product surface and a build-up of ferrous debris within the tanks.

As a result, a proportion of tanks failed the demanding inspection process. Additionally, the barrier filters required changing on a monthly basis and pumps were failing prematurely due to damage from ferrous particles. A decision was made to fit a Filtramag FM2.5 unit in the flow circuit prior to the re-circulating pump and one on the drain back to the holding tank. The company says that since fitting the magnetic filters the ferrous contamination has reduced to a point whereby finished product reject rates are virtually zero. Barrier filters remain fitted but only have to be changed every 10 months. An additional benefit is that the pump life has been greatly improved.

This Swedish company used magnetic filtration on its gear grinding and honing processes. Scania had concerns with its low-intensity magnetic rollers, which were only capable of removing particles of 0.1mm or above from lubricating oil, meaning anything smaller continued to be circulated. This meant the grinding tools had to be regularly replaced due to abrasive wear caused by the ferrous particles. The parts' surface finish was also being adversely affected by the presence of these contaminants.

The engineers at Scania specified a magnetic filter, fitted as a secondary filter after the magnetic roller, to extract the smaller particles down to  sub-micron size. This ensured that tool changes and product rejects caused by ferrous contamination were reduced to virtually zero. In addition, the lifespan of the oil was increased by 30%.