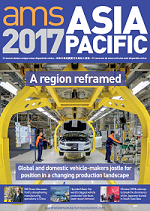 Given the political upheavals of the past year or so, these are uncertain times for global industry and trade. This includes the vast Asia-Pacific region which is home to some of the biggest players in the automotive industry, such as top producer Toyota (routinely number one or two worldwide in terms of volumes) and South Korea's Hyundai-Kia group, plus upcoming brands like Geely of China which are starting to gain an international presence.

The Asia-Pacific is currently suffering tensions between its constituent nations as well as coming under pressure from international powers such as the US, with Japan, China and Korea all publicly threatened by Donald Trump as he seeks to boost American industry. Japanese and Korean vehicle-makers, being particularly dependent on exports, may well have to rethink their global production strategies if trade relations are indeed renegotiated, with implications for their existing plants and workforces. Meanwhile, Chinese OEMs are starting to move into South-East Asian countries so far dominated by Japanese brands; setting up new factories, expanding current operations; and buying stakes in native companies.

Our Asia-Pacific 2017 special edition, including overviews, plant tours and interviews with top executives, provides in-depth analysis of the latest developments in the automotive industry as relations within the region are reframed. The articles are as follows:

ChinaGetting the green light – an overview of automotive production in the country, including recent OEM investmentsBenefits of experience – an interview with Bill Russo, Ford's vice-president for manufacturing in the Asia-PacificSpeed of thought – AMS reports from the GAC FCA plant at GuangzhouGrowing Geely – we look at the expanding production network of a growing international playerBuilding a Greater Wall – an analysis of one of China's most successful vehicle-makersFirst and foremost – AMS visits Changchun to see FAW Audi productionCapital gains – we go to see BBAC, the Mercedes-Benz factory in Beijing

Japan and KoreaTroubled times – an in-depth look at changing conditions for the automotive manufacturing industryMaking a Mirai-cle – AMS pays a visit to Motomachi to watch Toyota building its fuel-cell vehicle by handThe human touch – we go to Tochigi to see Nissan's takumi (craftsmen) at work on the GTR and Infiniti modelsBigger not always better – AMS explores the largest automotive manufacturing site in the world, Hyundai UlsanSUV-iving – we visit the only plant of South Korea's smallest carmaker, SsangYong PyeongtaekGoing Rogue – an overview of Renault Samsung Busan

South-East AsiaColonised by China – AMS investigates how Chinese OEMs are moving into the countries of South-East AsiaSeeking a niche – we look at SAIC's expansions in Thailand, Indonesia and MalaysiaRebooting Mitsubishi – an overview of Mitsubishi's changing manufacturing footprint in South-East AsiaGoing with the flow – AMS looks at Honda's new, cell-based production system at Prachinburi