Ford will shut all three of its production facilities in Brazil this year and import vehicles from other markets in South America, including neighbouring Argentina and Uruguay, to meet demand in the country.

The decision means the closure of plants at Camaçari, Taubaté, and Horizonte. Ford said the Covid-19 pandemic had worsened an already unfavourable economic environment in Brazil, which had led to persistent idle capacity and reduced sales in the country, compounding years of significant losses. 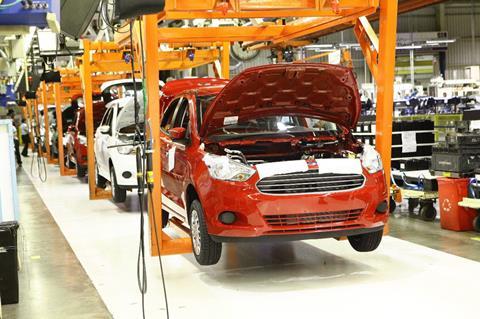 The Ford Ka+ at the Camaçari plant

“With more than a century in South America and Brazil, we know these are very difficult, but necessary, actions to create a healthy and sustainable business,” said Jim Farley, Ford president and CEO. “We are moving to a lean, asset-light business model by ceasing production in Brazil and serving customers with some of the best and most exciting vehicles in our global portfolio.”

Those imports will include the Ranger pickup, Transit, Bronco and Mustang Mach 1. The carmaker said it also had plans to accelerate the launch of several new electric vehicles.

“We will also accelerate bringing our customers the benefits of connectivity, electrification and autonomous technologies to efficiently address the need for cleaner and safer vehicles well into the future,” said Farley.

Ford will maintain its sales and service network in the country, as well as its Product Development Center in Bahia and its regional headquarters in São Paulo.

Vehicle production will be immediately terminated in Camaçari, meaning the end of production of the EcoSport and Ka models. Production of engines will also end at the Taubaté plant. The manufacture of other parts will continue at these locations for a few months to secure aftersales stocks.

The Horizonte plant, which makes the Troller T4 model, will continue to operate until the fourth quarter of 2021.

Ford said it would immediately begin working closely with unions and other stakeholders on an exit strategy.

“Our dedicated South America team made significant progress in turning around our operations, including phasing-out unprofitable products and exiting the heavy truck business,” said Lyle Watters, president, Ford South America and the International Markets Group. “In addition to reducing costs across the business, we launched the Ranger Storm, Territory and Escape, and introduced innovative services for our customers. While these efforts improved results over the past four quarters, the sustained unfavorable economic environment and the additional burden of the pandemic made it clear that much more was necessary to create a sustainable and profitable future.”