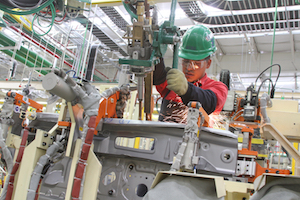 Japan - The OEM has announced plans to make more cars with a new type of steel developed by Nissan and Nippon Steel & Sumitomo Metal Corporation. The first vehicle to use the steel was the Infiniti QX50 with the front and rear side members.

According to the companies, the steel combines high tensile strength of 980 megapascals with a previously unachievable degree of formability. "The steel's combination of stamping formability and strength makes it possible to form parts with complex shapes that are thinner and lighter than those made of conventional high tensile strength steel, while maintaining the ability to absorb energy in a collision," they said.

Nissan says that it is aiming to expand the use of the steel so that it makes up 25% of the company's vehicle parts by weight. As such, it will gradually replace older grades of steel. The new steel can be cold-pressed, so the company believes that it won't result in large increases to vehicle cost.

Like many other car manufacturers, Nissan has also been using aluminium in order to lightweight its vehicles. In October 2017, the OEM stated that it had found no safety issues with parts containing aluminium from Kobe Steel after the supplier admitted to falsifying quality data.