The cutting edge of technology 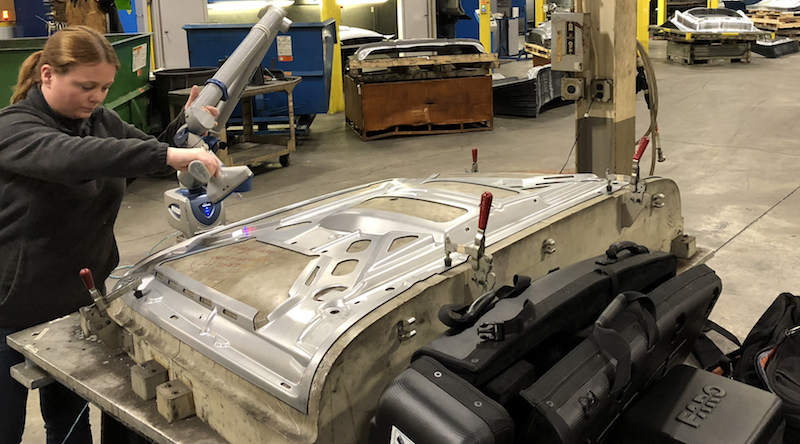 Laser Specialists Inc. (LSI) is widely regarded for precision sheet and stamped-sheet metal fabrication and cutting. Based in Fraser, Michigan (near Detroit), it serves a number of industries including automotive, aerospace, defense, construction, energy and appliance.

When your public moniker is “Staying on the cutting edge of technology,” you’ve set a bar for yourself. Thomas Paquin set that bar when he founded LSI in 1986. Paquin’s untimely death in 1993 left a void in the company. In 2004, Nick and Jon Paquin were able to metaphorically step into their father’s boots as president and vice president of LSI. The Paquin brothers were also determined to carry on their Father’s legacy of being on the cutting edge of technology.

“We took control of Laser Specialists in 2004,” says Nick Paquin, president of LSI. “Along with my brothers Jon and Tom, we all stepped in really with no experience and tried to make something of it. Working with our employees, we saw the need for investment in the company to get it on the cutting edge of technology.”

Raising the barHungry to improve LSI’s market position and profitability, the team leveraged customer feedback for insight. “We’re constantly asking our customers ‘How can we better serve your needs? What else can we provide that would be beneficial to your experience with us?’” says Jon Paquin, vice president, LSI. “Inspection came up quite a bit.”

“Historically, our process would entail a customer sending us math data and a stamping. We cut the stamping to their math data and then we send it back to our customer. The customer then inspects the part and marks it up for cutting edits. We would take it back, make the edits, upload the program, cut a new sample and send that sample to the customer. We would go back and forth several times until eventually, we had the approval of run.” This was a process that could take weeks.

“We’re talking about one part that could, potentially, go back and forth 20 times before it’s bought off,” reveals Nick. “Typically, we’re looking at five to fifteen back-and-forth trips to get an inspection performed, and laser time is very valuable. If you have that fixture sitting on the cutting table while waiting for approval, you aren’t cutting parts. The whole time you’re not cutting parts you’re not making money. And at the same time, we’re tying up the customer’s inspection department.” The Paquins decided to look for a better way to satisfy their inspection needs.

Cutting edge inspection“I saw some of the new laser scanning products out at some customer shops as well as some OEMs,” says Jon. “They liked the real-time feedback with the colour mapping on form and profiles. Inspection was one of the biggest hold-ups associated with laser cutting and Nick and I knew we wanted to raise our quality standards. We needed a way of inspecting parts that would increase throughput, plus offer our customers a value-add that most laser cutting job shops around don’t. We were attracted to the FARO ScanArm based on the updated blue laser scanning capabilities, which we understood provided higher accuracy and dealt with shiny surfaces better [than red light lasers].”

The FAROBlu Laser Line Probe high-definition camera uses the most advanced complementary metal-oxide-semiconductor (CMOS) technology to deliver fast frame rate (the number of times per second that the camera gathers new data on the part being scanned) of up to 300 frames per second. This equates to approximately three times faster scanning than currently available red laser technology.

Because blue laser has a shorter wavelength than red, a blue laser can deliver improved scanning results due to its intrinsic higher resolution, with a 50% reduction in speckle noise. “The FAROBlu Laser Line Probe is part of the technology we invested in to improve our processes and products,” says Jon. “With in-house laser scanning and inspection, we’re now able to do our own internal checks and get the part to a level where there are minimal edits that might need to be made.”

“Another reason we like the FARO laser scanner is that we’re not only inspecting the profile of the part, but the laser scanning is giving us real-time information relative to the form for the part as well,” continues Jon. “So, with the colour mapping and all of the information that we generate through the laser scanner, we’re also able to identify if the sample part and form that a customer sends us matches their own math data.”

With abundant data from the FARO scanner, LSI is also equipped to help clients improve their processes as well. “It helps bring everybody to the table. It allows us to give customers feedback relative to the parts that we’re receiving and whether or not they’re actually matching up to CAD properly,” explains Nick. “Then we can figure out how to move forward and fix a problem rather than devolve into finger pointing.”

Return on investmentPortable inspection equipment helps the LSI operators to keep the ball rolling. “Portability is big, being able to go out on the floor,” says Nick. “Sometimes we have parts that are just really large, and we have to scan them in three passes and then marry that data together. And we have to do that on the shop floor, because we don’t have a quality room big enough to deal with large parts.”

“If we’re dealing with a large part, we’ll take the ScanArm out on the floor and set up out there. We have the vacuum cup mount and the magnetic mount, so we can we can virtually put it anywhere out on our floor and use it. If it’s a smaller part, we set that up in in our quality lab. The FARO Blu also has temperature compensation for those hot summer days. As you let it acclimate properly you’re not affecting your scan data because it has that technology built in.”

“If we can eliminate one or two trips to the customer for the buyout [approval] process, we may save days on getting that project bought off,” Nick adds. “Then we can get to cutting those parts sooner. It really increases our productivity in getting these jobs through. It’s more of savings in time than anything else.”

And time is money. “We’re taking a lot of the inspection process out of our customers’ facilities, and doing it in-house,” Nick observes. “This expedites the process and gets those parts shipped out to our customers much quicker.”

“There’s scrap savings because now we have the ability for the laser operator to directly communicate with the inspector,” says Jon. “Controlling that in-house definitely gives us a better opportunity at going through fewer iterations to get to the final accepted product. The faster we get the first articles approved the faster we can go into production, and the faster we generate revenue.”

Looking to the futureAlthough LSI is a successful job shop, contract manufacturer, Tier 2 supplier, and player in the prototype and low-, mid-, and high-volume niche, its leadership is always looking to improve and grow. “We are on track to become ISO certified” reveals Jon. “Not only is certification a great way to control your processes for internal purposes, it also tends to attract higher profile jobs. It started with us adding a quality department, which went hand-in-hand with buying a FARO ScanArm.”

“We also have some customers right now who we are not even laser-cutting parts for, and they’re wanting us to perform inspections on some of their formed stampings. They love the real-time feedback that they’re getting with the full-colour map reports. So, it is opening up an inspection category that’s going to generate revenues outside of laser cutting.”

“We’ve been very fortunate with some of the connections we’ve made with companies over the years,” Jon recalls. “We focus on providing more for our customers. The main thing is this: we’ve made an effort to modernise not only the look and feel of our facility here but the technology that’s on the floor being used on a day-to-day basis. We have no interest in being the dingy shop down the street that nobody wants to work for. We’re creating an atmosphere of modern technology, top people, and talent. That’s really how we see we can grow our market share.”