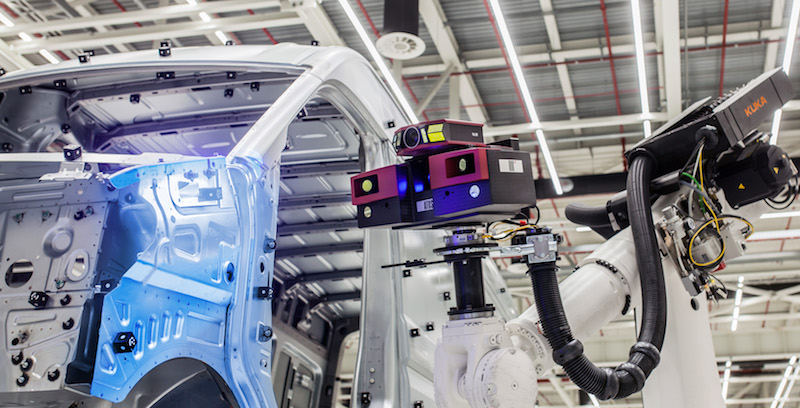 Officially opened in October 2016, the new plant in Wrzesnia, Poland, is a highly modern production facility operated by VW Commercial Vehicles. It will be used for building the VW Crafter van, with up to 100,000 vehicles a year being produced. Covering an area equivalent to 300 football fields, the bodyshop, cubing centre, paintshop and final assembly plant have been constructed from scratch along the lines of VW’s ‘Think Blue. Factory.’ energy-saving programme. “The plant in Wrzesnia is a role model for European transporter construction – state-of-the-art technology yet environmentally efficient at the same time,” says chief executive officer Jens Ocksen.

Individually configurable vehicle bodies and equipment variants are key features of contemporary automobile production and provide a decisive competitive advantage. Production at the plant in Wrzesnia was planned accordingly.

The VW Crafter built in Poland is based on a completely new platform – 70% of production covers exclusively made-to-measure solutions. Volkswagen achieves this largely through automation. In order to implement the wide range of variants and individual orders, 430 robots carry out 68% of the welding and adhesive procedures in the bodyshop as well as material transport tasks. The automation level in the paintshop is 65%.

Customer-specific production in Wrzesnia also requires new concepts with regard to quality assurance. Given the 1,100 equipment variants of the VW Crafters that can be configured, the range of parts to be measured is vast; underbody, front end, closed and open bodies, single or double cab, etc. Therefore, the measuring hall, totalling 5,400 sq.m of floor space, has been integrated into the body manufacturing line close to production. The cubing centre with Meisterbock, virtual assembly and full-size Powerwall are directly connected to the measuring hall via a passageway.

In terms of quality assurance, Volkswagen is using non-contact measuring technology almost exclusively. The equipment of the measuring hall at Wrzesnia chiefly includes automated optical measuring systems supplied by GOM: two Series 6 ATOS ScanBox systems as well as three double-robot measuring cells and several mobile optical measuring machines. These are used for extensive inspection of assembly modules and body shells through to completely painted bodies. Everything is designed for measuring the vehicles that are up to seven metres long and almost three metres tall. The measuring results of the optical systems from GOM are used for a full-field 3D geometry check, including border lines and hole pattern by comparing nominal and actual data.

Given the variety of the components to be processed, creating and providing the measuring and inspection programs represents a decisive function. Robot paths and sensor positions should be calculated automatically and independently from the user, and above all they should not block the running measuring cells. The functions of the integrated GOM software, such as the virtual measuring room (VMR) and Auto Teaching, offer good solutions.

In the VMR, components, sensors, the measuring cell and kinematics are simulated so that paths and positions of the robot and the sensor can be calculated automatically. The component CAD provides the basis for determining the measuring positions. At the same time, inspection planning can take place on a decentralised basis irrespective of the measuring system. The measuring and inspection program is stored as a template and called up later by the factory employee in ‘kiosk mode’ at the measuring cell.

Think fastThe measuring systems from GOM are referred to by Volkswagen as ‘fast runners’, and are even used by the component suppliers located in the vicinity of the plant in Wrzesnia. This is because the new location in Poland was planned without a press shop. Instead, the suppliers of the pressings and add-on parts carry out the goods-outgoing inspection using the same measuring technology and the same component fixtures that are used at Volkswagen.

On the body construction line itself, six inline robot measuring cells, supplied by Zeiss, check individual points, hole positions and edges. The accurate, optical measuring results are used for process monitoring by means of data correlation between the relative measurements. The systems detect unusual fluctuations, although there is no further possibility of fault analysis. Absolute measurement of the parts in the measuring room, using GOM machines, on the other hand, makes it possible to draw targeted conclusions about the actual cause of the process nonconformity.

Volkswagen is reaping the rewards of many years of cooperation with the measuring technology manufacturers. The consistent interplay between sensors and software from the same company is a decisive factor for VW alongside implementation of relevant functions. However, what count for Volkswagen when selecting the measuring system are facts: requirements must be met, and above all verified. The accuracy of the systems has been checked and certified by an independent body. Moreover, the systems are subjected to thorough testing by Volkswagen itself time and time again.

The reorientation from tactile to optical, full-field measuring technology is due to the completeness and comprehensibility of the results provided. “The optical measuring room is the measuring room of the future – for people and technology,” says Werner Steinert, head of measuring systems at the Wrzesnia site. With more than 25 years of experience in automobile construction, it is clear to him that measuring technology must always deliver a benefit: “After all, uncontrolled processes are bad processes.”

The non-contact and full-field coordinate measuring technology also enables Volkswagen to achieve a density of information that is not possible by tactile means. The 3D measuring results make it possible for the processes to be provided with effective feedback control without taking up more time for the product. They also serve to check not only the function but also the visual appearance and design based on dimensional accuracy, thereby achieving the exacting quality requirements of Volkswagen and its customers. Consequently, optical, full-field measuring technology is not only state-of-the-art, but also groundbreaking.