As the automotive industry continues to focus on lightweighting for better fuel and energy efficiency of vehicles, there is an increased trend towards light metal alloys and eliminating mechanical fasteners by adhesive bonding. This has created a need for improving the reliability of metal-to-metal bonds, for which proper surface treatments are key. Solvay discusses some solutions 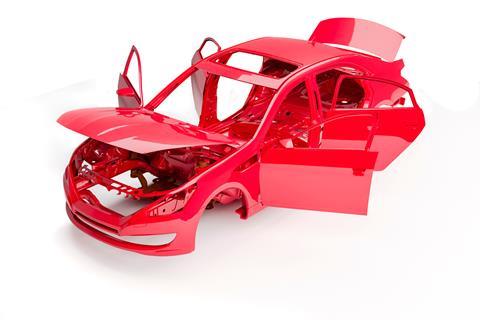 The company has developed advanced polymers to improve existing pre-treatment technologies, which greatly enhance bonding performances and have already been successfully implemented in premium and mass production vehicle assemblies.

With transportation representing 14% of global greenhouse gas or CO2 emissions, the industry must decrease this amount by three to four percent each year to meet the targets of the Paris Agreement on climate change mitigation. Lightweighting that does not compromise vehicle safety nor comfort is more than ever the main lever for solving this challenge, either by reducing fuel consumption of combustion vehicles or increasing the range of electric vehicles (EV) per charge. There are various material options for lightweighting, ranging from aluminium, magnesium and high-strength steel alloys to plastics and fibre reinforced composites. Among those, aluminium is clearly favoured by automotive manufacturers, since it offers a highly attractive compromise in terms of weight reduction, cost-in-use, mechanical performances and recyclability. The aluminium share in the automotive industry has doubled over the past 10 years and is expected to continue growing. In addition, offsets from processing and end-of-life parts are increasingly being recycled as manufacturers and processors are working to close the loop of the aluminium industry.

“However, aluminium weldability is limited, so OEMs must shift to adhesive bonding, which often lacks robustness and long-term reliability,” says Dr Marie-Pierre Labeau, Metal Treatment Platform project leader at Solvay. “At the same time, existing surface pre-treatment technologies for bonding have given rise to health and environmental concerns related to chromium content, process waste and water consumption. Our new heavy-metal-free, P-based polymeric Addibond additives address all those issues from the start and provide superior pre-treatment results for a significant improvement of metal-to-metal bond strength over time, even under the most severe in-use conditions.”

Solvay’s Addibond polymers are designed to deliver a surface pre-treatment that will maximize the strength of adhesive bonds in those applications by combining two functional groups: one reacting with the metal substrate, normally before it is shaped, and the other reacting with the adhesive during assembly. The effectiveness of this smart chemistry was validated in comprehensive trials versus incumbent technologies. Ford Bond Stress Durability test was used to evaluate the bonding strength of samples under simultaneous compression load and corrosion stresses, and Single Lap Shear (SLS) testing served to determine the cohesive failure (desired) and the adhesive failure (to be avoided) after extensive cycling under acetic acid salt spray, high temperatures and humidity (SWAAT - ASTM G85 A3). 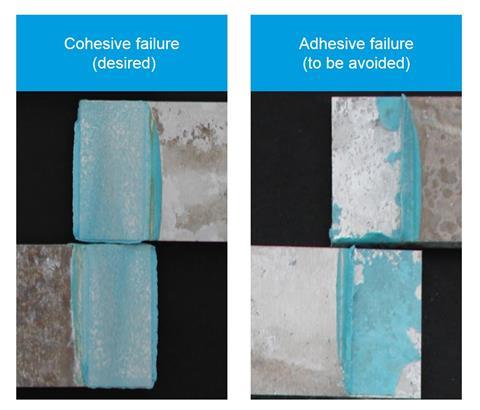 In both test types, formulations containing Addibond 275 and 021 proved that they can outperform existing pre-treatment technologies even in aggressive environments, or alternatively boost the performance of incumbent pre-treatments when added to processes already in place.

Compared to formulations using hexafluorides, the Solvay polymer-based formulations showed much better robustness across a broad range of concentrations, contact times and temperatures and ensured a more cohesive failure mode. “The latter was also evident in contrast to organic silane formulations, highlighting the advantage of our P-based polymeric solutions over silanes even when those are bi-functional,” adds Dr Flora Fan, Metal Treatment Global Business Development manager for Solvay. Moreover, Addibond 021 also demonstrated that it can greatly improve the performance of existing titanium-zirconium (TiZr) pre-treatments. 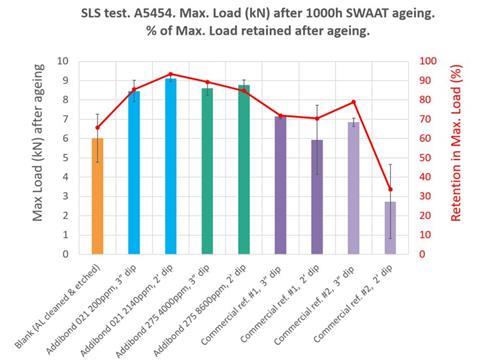 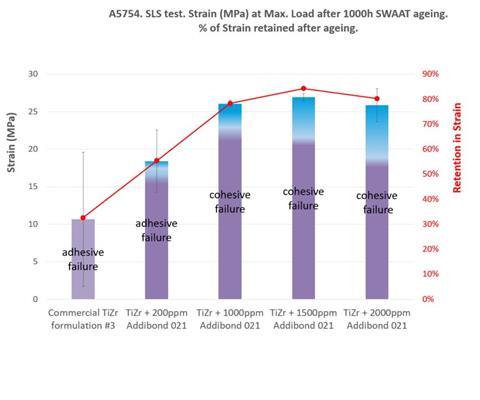 Addibond 021 can significantly improve the performances of existing TiZr pre-treatment processes. From left to right: TiZr formulation ( 3%) tested alone at RT and tested combined with increasing amounts of Addibond 021, from 200 up to 2000ppm active, at RT (Graphic courtesy Solvay)

Altogether, the tests confirmed that the polymeric additives promote best-in-class durability (strength of adhesion before and after severe aging) and ensure a high level of robustness during assembly.

Sustainable benefits
These results provide clear evidence that Addibond polymers can be an effective enabler for leveraging the lightweighting potential of aluminium and other light metals in a wider range of applications while also meeting higher standards of sustainability in the manufacturing process.

Solvay estimates that the consistent use of aluminium pre-treated with its advanced new polymeric solutions could result in average vehicle weight savings of up to 20%, reducing fuel consumption by 10% or a mean of 13 grams of CO2 per kilometre. “Simply spoken, 4 grams of Addibond can lessen the carbon footprint per car by 300kg of CO2 annually,” states Julie Mollet, Industrial Process Solutions Marketing Director, Solvay. “At an approximate one billion combustion vehicles in circulation by 2030, this translates to a potential reduction in CO2 emissions of 26m tons. Major savings can also be achieved in the power consumption of electric vehicles when using Addibond treated aluminium for example in bonded components for large battery assemblies.”

Moreover, Addibond helps component manufacturers and assemblers improve the compatibility of metal surface treatment in line with stricter HSE standards and regulations. The formulations are free of chromate, heavy metals and fluorides, eliminating the risk of toxic exposure for operators. Moreover, the resulting baths are highly stable over time, free of gels, compared to silane baths. This in turn means that baths have an extended lifetime, require fewer bath makeup, thus minimising the consumption of additives and resulting in less process water to treat and recycle.

State-of-the-art technology
The polymeric pre-treatment technology is already part of the formulation used by high end as well as mass producing automakers . “Adhesive bonding has become state-of-the-art for joining metal parts, and our innovative Addibond solutions are playing a major role in the lightweighting game, adding greater reliability, robustness and sustainability to the process,” concludes Dr Flora Fan.