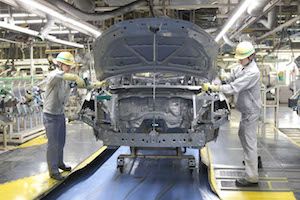 Japan - The company has recently announced that it has made over 50m units in the country, 86 years after it produced its first three-wheeled truck in October 1931.

"Even making 1m cars a year, it would take 50 years to reach this milestone, showing just how long Mazda’s history is," commented president and CEO Masamichi Kogai. "Moving forward, Mazda will continue to build a strong brand through a variety of initiatives. Our plants in Hofu and Hiroshima will continue to evolve and act as parent factories, rapidly deploying their technologies and skills to our overseas plants. I’d like us all to work together to ensure these plants continue to embody the kind of technical prowess that does justice to Japan’s proud history of Monotsukuri."

Mazda is hoping to sell around 1.66m vehicles in the 2018-2019 fiscal year after recording its third consecutive year of growth during the 2017-2018 fiscal year. The OEM expects the recent market launch of the CX-3 in Japan to help, with the model also set to go on sale across Europe during the summer of 2018.