Ford’s Bridgend engine plant in the UK, which produces over 750,000 petrol engines a year, has engaged in a cutting-tool partnership with Mapal to help the factory to hit its SPC targets and precision levels on critical engine components. To facilitate this, Mapal has based an engineer, Wayne Keepins, permanently at the plant. “We are committed to helping Ford hit targets of improving productivity or reducing costs by 10-15% year-on-year,” says Keepins.

Like most modern engines, Ford’s power systems are lightweight aluminium blocks with sintered iron inserts pressed into the bores to support moving wear parts, and a large portion of Mapal’s products are applied to engine-block milling and hole-making applications. The tooling company says that to meet this challenge it has developed bespoke multi-stepped drilling solutions.

Boosting productivity through combination tooling“To improve efficiency, productivity, tool life and reduce costs, we have to go beyond replacing previous hole-making tools; we have to design completely new concepts,” says Keepins. “One example is the machining of valve seats for the 1.5- and 1.6-litre engine line. The previous process relied on three different indexable insert tools to undertake four processes. Here, operations included machining the throat blend on intake ports, semi-finishing the intake valve seat, piloting the valve guide and then finishing the valve seat and guide. Instead, we developed a new combination tool that has reduced the overall process from three tools to two, reduced costs and set-up times and enhanced productivity.”

Removing the stock material in a single pass eliminates the need for a separate throat blend and valve seat tool, says Mapal. The new combination tool reduced cycle times from 64 seconds to 34 seconds, cut tool setting times by 30% and lowered the number of tool changes by 800 per year.

Other tools have been developed to resolve inherent engine block machining issues. On the JLR V8 engine line, the crank-boring process was trapping swarf in the guide pads of the boring tool while the rear of the tool was being contaminated with swarf particles. To resolve this, Mapal developed a two-tool process to replace the previous three-tool operation. By removing the rough-boring tool and machining the complete bore from one side of the block, the two-tool process reduced insert consumption and improved tool life to the tune of £52,000 ($64,000) per annum.

This was partly down to the new tool requiring four inserts as opposed to eight, a potential 50% saving. The line, which manufactures 145,000 engines a year, has also benefitted from enhanced bore precision and surface finishes, improved hourly engine throughput and reduced tool changeover times.

Rough machining, smooth finishingContinuing the theme of milling-tool innovation, another cutting-tool specialist, Sandvik Coromant, has introduced a face mill specifically for the rough machining of stainless steel turbo housings. The main challenge in roughing turbo exhaust housings is the complex shape of these thin-walled components and their intricate clamping, which make for a vibration-prone operation. The positive geometry of Sandvik Coromant’s M612 face mill is said to have the effect of providing a smoother cutting action by eliminating vibration. In turn, higher metal removal rates can be accomplished.

“Stainless is becoming a more popular choice for turbo housings over conventional cast iron due to properties that help improve resistance to exhaust gas temperatures of up to 1,300°C, as well as corrosion,” says Jacques Gasthuys, automotive application engineer at Sandvik Coromant.

“Approximately 50m turbo chargers are produced every year – cast iron and stainless – but the cost of machining stainless is often up to 20 times higher as these operations are characterised by extremely short and irregular insert tool life, as well as uneven wear. With this in mind, our goal was to develop a strong cutter that could help reduce component costs.”

In a customer project featuring grade GC4240 inserts, the use of an M612 cutter allowed spindle speed to be increased from 212rpm to 273rpm, cutting speed to be raised from 70m/min to 90m/min and feed rate to be increased from 0.13mm/rev to 0.18mm/rev. At the same 2.5mm depth of cut, the result of the trial showed that the M612 face mill reduced machining time per component by 27%, while tool life increased by as much as 172%.

In trials against conventional coated CBN inserts used for the hard turning of transmission shafts, BC2010 inserts were able to improve tool life by 230%. Furthermore, when BC2020 was applied to the turning of constant velocity joints, which featured interrupted cutting in the machining cycle, tool life was said to increase by 150%.

As a result of these gains, users can play the higher productivity advantage of single operational strategies on materials over 45HRc and thus eliminate grinding and EDM processes. Indeed, above 55HRc, CBN is said to be the only cutting tool that can effectively replace conventional grinding processes.

So, how about extending CBN to micro-boring bars? Well, Sumitomo’s BSME and SEXC series are designed for holes as fine as 2.5mm in diameter in hardened materials. In recent trials which involved the finish-boring of 7.1mm diameter holes in hardened automotive components using emulsion coolant, the use of Sumitomo’s SEXC indexable insert grade BN2000 increased the number of parts produced per corner by over 400% to 2,700. Cutting speed was 156m/min (7,000 rpm), with a feed rate of 0.03mm/rev and 0.1mm depth-of-cut.

Tooling for 24-7 machiningAway from production machining, correct cutting-tool application is equally important when it comes to fixture manufacturing. This can be verified by UK-based subcontractor Formagrind, which recently won a significant automotive order that led to investment in two Hurco VMX30Mi machining centres and new tooling innovations from Mitsubishi Materials.

“The order was for over 100 complex titanium fixtures that each consist of a carrier base and corresponding top plates for clamping electronic PCB assemblies during their production and final assembly processes,” explains managing director Mike Couser.

“Firstly, we needed two new VMCs to give us additional machine capacity; and secondly, we needed consistent lights-out production. This is when Mitsubishi stepped-in with their solid carbide end mills.”

The base plate and corresponding top plate cover units that clamp the automotive electronic assemblies were initially required in a batch size of 105 bases and 160 cover plates. With over 14 hours of machining for each base and 1 hour 50 minutes for each cover plate, Formagrind realised that it needed to run its new Hurco VMX30Mi machines 24 hours a day, seven days a week for almost two months. The key factor for unmanned lights-out production was the cutting tools.

Formagrind developed a fixture to clamp and subsequently machine two 300mm x 200mm x 9.5mm base plates at a time. The grade-two titanium plates were firstly machined using a Mitsubishi 8mm diameter solid carbide four-flute VQ series end mill at 4.5mm depth of cut with a 1.2mm step-over and a feed rate of 1400mm/min. After almost two hours of non-stop machining, the 8mm tool was followed by a 4mm and a 3mm diameter VQ end mill for the remaining machining of the finite details.

Once the surface and respective details were complete, Formagrind used 2mm, 3.5mm and 4mm diameter VQ end mills for rough- and finish-machining the pockets, which were cut by water jet prior to machining to help reduce on-machine time. For the smallest details, a 0.5mm diameter MS2-SLB end mill was used. A total machining time of nine hours for the top-face of the two parts made tool life critical.

"For us, the ability to confidently run unmanned for prolonged periods was crucial... To this end, we changed tools after each pair of bases even though wear was hardly noticeable after 14 hours of machining" - Mike John, Formagrind

“We consulted with Mitsubishi at the very start of the project and they recommended the VQ end mills for the majority of base plate operations,” says shopfloor manager Mike John. “For us, the ability to confidently run unmanned for prolonged periods was crucial. We couldn’t afford to have a tool break mid-cycle as this would potentially scrap the parts and impact on tooling in the following sequences. To this end, we changed tools after each pair of bases even though wear was hardly noticeable after 14 hours of machining.”

As for the smaller top guide clamps, Formagrind created a fixture to machine ten guides in a single set-up. On the top guides, the first-stage machining was performed with a 6mm diameter VQ series end mill at 4.5mm depth of cut. Again, this was followed by 3mm, 3.5mm and 4mm diameter VQ end mills for the other machining and pocket milling, with a 2mm diameter VFH long-neck series with 0.5mm radius and variable helix applied to finishing the detailed features.

During this process, the 3.5mm VQ end mill had a run-time of 55 minutes and had not been changed through the complete project, demonstrating tool life of 550 minutes on titanium. Additionally, the 6mm roughing tool had conducted 4.5mm deep roughing throughout the complete batch – returning over 20 hours of machining even at these testing parameters.

Getting to grips with die castings 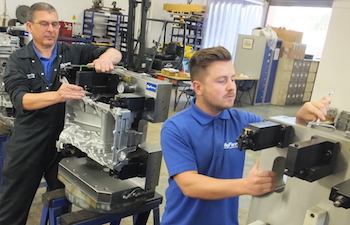 Hyfore has delivered 54 bespoke fixtures to the Amtek Group, which has a major aluminium die-casting foundry

Successful metal cutting relies just as much on the fixture as it does on the tooling. This can be confirmed by the Witham, UK, plant of Amtek Group, which has recently received its latest collection of workholding fixtures from Hyfore Engineering, a member of the Engineering Technology Group. In total, Hyfore has delivered 54 bespoke fixtures to the Amtek Group, which has a major aluminium die-casting foundry which produces components in the range of 400 to 2,700 tons. The Witham facility produces mostly powertrain engine and transmission components, offering customers a fully integrated die-casting and machining facility with components delivered in assembly-ready condition.

Rigidity and repeatability in machining operations are the key criteria, putting the onus on the fixtures, particularly for larger components such as oil pans. The dimensions of all components machined are within a 500mm machining envelope and a high proportion of operations involve milling, drilling and tapping, with compound angle machining featuring heavily.

“We always involve Hyfore from the very early stages,” says production engineer Jeff Marshall. “Once we have a casting specification, they design and prove-out the prototype before taking the project to a production fixture. “Here, we are continually looking to optimise our machine shop’s capabilities, so it is important there is a lot of trust between the two parties, which is the case.”