The next Laser World of Photonics event will be held at the New Munich Trade Fair Centre from 15-18 June. While covering a broad spectrum of laser usage across a variety of industries, the exposition will also offer carmakers the opportunity to view some of the latest laser technologies designed to improve efficiencies in automotive production. AMS recently attended the World of Photonics press preview to discover what car manufacturers can expect to see at the event.

According to Dr. Armin Renneisen, Managing Director of Rofin Sinar, the company will be displaying its Day and Night Design laser at the Laser - World of Photonics. This application is designed to remove the inner coating of automotive dashboard switches in order to allow light to pass through the switch when activated. This demands a constant power level, in combination with precise beam deflection as if the laser is too strong, it will burn through the switch rather than remove the inner coating. In a doublehead system, the software package supports functions such as single offsets for marking heads, as well as optional beam splitting or switching.

Rofin further plans to offer details on its BIW laser applications, including CO2 SLAB, Q-switched Nd:YAG and cold-cutting systems. The CO2 Slab system offers a patented design said to return fast cuts and deep welds, using a beam quality of K>0.9. Q-switch lasers, on the other hand, are used in laser ablation, the removal of metallic coatings in order to achieve improved weld joints, while cold-cutting systems allow carmakers to pierce BIW panels after painting without affecting the surrounding material. This can be used where fixtures must be fitted, as with roof panels. 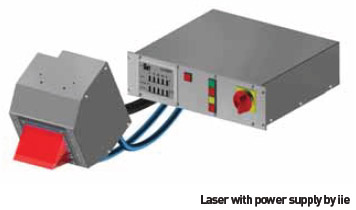 iie will be presenting its direct imaging diode laser system, designed for the cost-effective remelting of metal in the BIW process. This allows the surface treatment, tempering and hardening of the material, together with cutting facilities and welding of thin plates and foils.

The system generates a line 0.2mm wide and 110mm across, with the option of joining several units together to allow for the rapid treatment of larger surface areas. Irradiation intensity on the metallic surface is greater than 95%, while the typical power density is 10kW/cm2. A further advantage of the system is that it allows the simultaneous transfer of thermal energy to the material along the entire width of its beam.

Fraunhofer produces lasers for a range of applications with potential for use in the automotive sector. At the Laser exposition, the institute will show its latest technology in the field of high-power remote processing, which features lasers directed using optical mirrors. Cutting and welding systems using linear direct drives to position the laser beam are said to be unable to match the speed of this remote technique, which can complete operations involving complex cuts and welds over several metres long in just seconds. Other advantages include the system’s compact size, as well as its flexibility, plus the remote unit can be run in co-ordination with robotics or as a stand-alone system.

In addition to this, Fraunhofer is involved with LED beam shaping, which in the realm of automotive manufacture relates primarily to the new generation of LED headlights and also to dashboard backlighting. At the Laser event, carmakers will likely find the company’s demonstration of ultra-thin image sensing equipment of interest.

Further to showing various laser solutions at the Laser - World of Photonics event, Fraunhofer’s Andreas Bräuer will be presenting lectures on developments in solid state laser technology, offering information in the latest developments of this laser type, and sustainable illumination concepts, including efficient manufacturing processes for future light sources.

From the company’s array of latest laser technologies, Trumpf plans to display its new 100W diode module designed to power the new TruDiode direct diode laser module. With features that include 100W from a single fibre optic and a divergence of less than 120 mrad, the passively cooled unit will serve as the basis for the TruDiode system.

Trumpf claims that the unit can be used in place of current, lamp-pumped solid state welding lasers, offering improved beam quality, plus a 40% improvement in energy efficiency. Measuring 8 x 6 x 3cm, the unit is also compact, allowing the TruDiode system to be equally small in size.

Trumpf is also planning on having its new generation of TruDisk lasers on display. Featuring a modular design, the simplified arrangement is said to virtually eliminate downtime, as individual diodes and laser components can be serviced onsite. In addition, the TruDisk lasers offer improved access to fibre optic cables, allowing parallel fibres to maintain production while servicing is carried out. With a life expectancy of over 50,000 hours and up to 16kW of power, the series is said to offer unprecedented performance in industrial applications. Featuring a scalable design, Trudisk lasers offer integrated power sensors and real-time feedback control which, according to Trumpf, means the workpiece will receive a reliable and continuous power stream. 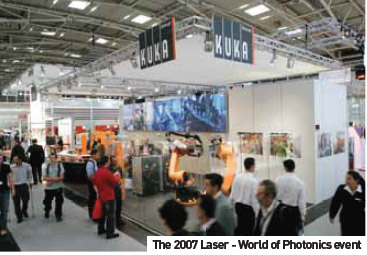 Developers of laser diode systems and controllers, Amtron plans to have a variety of products at this year’s Laser - World of Photonics event. The LS400 Laser Processing System is a complete unit (including laser head) that can be used in a wide range of applications, including direct machining of plastic and metals, laser scribing, high-power illumination and the heating of metals or ceramics. Offered in a compact housing (432 x 223.5 x 212mm, length x width x height), the LS400 can be positioned at different distances from the work surface, with a range of spot sizes. Options for the system include a pyrometer and power sensor.

Amtron will also have the new CM100 controller modules available for inspection. This new generation of laser diode controllers comes in a variety of models, the most powerful of which can achieve peak power of up to 10kW.

The mini-controllers are claimed to offer considerable flexibility in configuration, allowing the user to adapt for different voltages and current ranges. The compact nature of the CM100 allows it to be built directly into the laser, of particular use when dealing with the efficient transfer of high voltages. The unit also offers an Ethernet interface for configuration and performance monitoring.

With a moniker of ‘Light at Work’, the Laser - World of Photonics event promises to deliver a range of laser technologies suitable for carmakers and Tier suppliers.

Taking place in conjunction with the World of Photonics Congress (14 – 19 June), the leading international meeting of laser technology producers, the events promise to deliver an enticing combination of both future technologies and equipment that is now available in the marketplace.