The use of a wide variety of materials throws-up significant production challenges and chief among those is joining. How can this plethora of materials be fixed together without affecting their structural integrity or their individual characteristics? 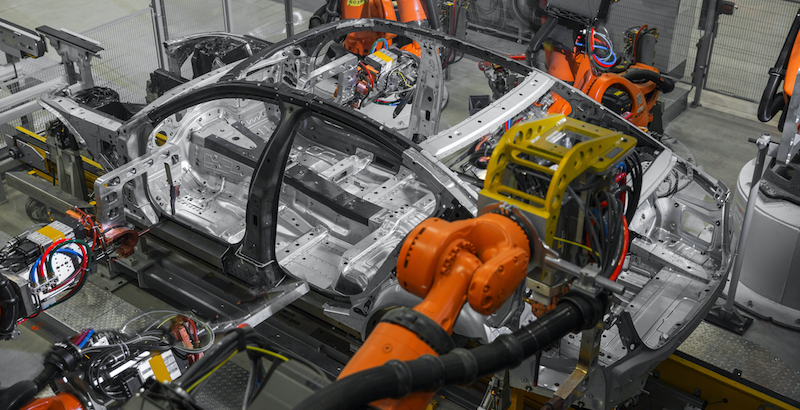 The automotive industry is mostly set-up for resistance spot welding (RSW). This method has been used by carmakers to join metal structures for many decades – a typical vehicle might contain anything between 2,000 and 5,000 spot welds. However, RSW cannot be used to join composite parts. Composites based on thermoplastics can be welded using ultrasonic processes. Such a process, called torsional welding, has been developed by Telsonic and Magna and is being used by the latter at its exteriors plant in Liberec, Czech Republic, to join thermoplastic olefin brackets to the talc-filled TPO front fascias of the 2017 Skoda Octavia.

The process relies on a sonotrode – a tool that creates ultrasonic vibrations – and a lower anvil gripping the surfaces of the upper and lower part. The sonotrode then twists to create enough friction-based heat to join the bracket to the fascia.

Global product line engineering manager, trim, at Magna, Mark Pilette, says: “The technology was originally developed for other material applications like films, foils and thin diecast parts that were considered too delicate for normal welding processes, then development continued for plastic applications. Telsonic patented and developed the torsional welding process in 2007.”

Magna claims the technology enables an approximate weight saving of 10% in comparison with the tapes that were previously used to join the thermoplastic olefin parts, as it allows thinner materials to be joined, which in turn reduces material costs.

Pillette continues: “We use TPO brackets to weld TPO fascias, but other thermoplastics should be compatible with torsional welding. You just need to consider the melt temperature of the plastic, and you need to weld like plastics – semi crystalline to semi-crystalline and amorphous to amorphous. Glass fillers should also be compatible with this process.”

However, the use of thermoplastic composites in structural applications is in its infancy. Composites based on thermoset matrices, such as epoxies, cannot be welded at all, meaning parts made from these materials must be joined using adhesives or mechanical methods.

Mechanical joining methods such as rivets, bolts and screws are popular for incorporating composites into automotive structures, but pose some significant problems. Punching holes in these materials can damage their laminar structure, which is vital to the material’s strength and stability. Furthermore, the punched hole must be sealed using a complex process to prevent delamination of the material. When joining carbon-fibre-reinforced plastic (CFRP) to metal, there is also a high risk of corrosion. To add to this, any mechanical attachment method will add weight to the structure.

As such, mixed material designs are increasingly being held together with adhesives. A study from the US Center for Automotive Research (CAR) reveals that some vehicle models use more than ten times the adhesive they did in 2001. According to the research centre, adhesives will become the dominant form of joining by 2030, eclipsing even resistance spot welding.

This is despite the misgivings from some in the automotive industry about adhesive bonding due to the relatively high cycle times associated with the process, its incompatibility with existing bodyshops and lingering doubts over its structural performance.

Antonio Pagliuca, senior technical specialist, adhesives, for 3M’s Automotive and Aerospace Division, says: “Many designers may feel that a line of adhesive can never be as effective as a line of rivets. However, many tests and practical examples show that adhesive bonding can outperform mechanical fastening techniques. As well as cutting part count and component weight, adhesives can seal gaps, reduce internal vehicle noise and act as the best interface between a wide range of dissimilar materials.”

Indeed, adhesive bonding is a proven method for thermoset-based CFRP-to-CFRP joining. For the production of each CFRP passenger cell for BMW’s hybrid-electric i3, the carmaker uses 173 metres of adhesive. Each stage of the automated bonding process is activated by lights and monitored by cameras.

In joining an inner and outer sideframe, one robot cleans the bonding lines with a saturated felt pad, which is replaced between jobs, and a second applies the polyurethane (PU) adhesive (Betaforce from Dow Automotive Systems). Another pair of robots presses the two components together while the adhesive is cured.

BMW has succeeded in reducing hardening times and the adhesive is workable for just 90 seconds after application. It achieves full strength 90 minutes later – a tenfold acceleration over conventional times. A supplementary thermal process, applied via a series of small heat lamps mounted on the end-effectors of the robots, is used to bring the hardening time under ten minutes.

However, adhesively bonding composites with metals presents its own set of challenges, says director of sales and marketing for automotive at composites producer Hexcel, Achim Fischereder. “It’s all about the interface,” he states. “It has to manage the different thermal expansion coefficients of metal and composites. Steel can be oily, so the interface must absorb the oil and still bond well. And requirements for lap-shear performance must also be met.”

Also there must be a barrier between the metal and the composite part to prevent galvanic corrosion from occurring.

Hexcel and BMW wrestled with these challenges during the manufacture of the B-pillar for the CFRP-intensive structure of the 7 Series. This part is made from high-strength steel reinforced in key locations with CFRP preforms made from Hexcel’s HexPly M77 prepreg, which features an epoxy resin system that cures in 1.5 minutes at 160°C. By employing this hybrid approach, BMW is able to exploit the benefits of both materials – the ease of process and cost of steel, and the stiffness of CFRP.

“All of the connection points to the body-in-white are metallic, so welding can be used,” says Fischereder. “The part can go through standard assembly and it is essentially invisible to downstream processes, such as e-coating.”

The B-pillar is produced using a hybrid pressing process, during which the preformed prepregs are placed in a moulding die with sheet steel, then pressed and hardened. Bonding between the two materials is achieved through the use of a film adhesive.

Fischereder says this adhesive was chosen as it is easier to handle than paste adhesives and there is a lower chance of contamination. But the main reason was consistency.

“When using film adhesives, you have a defined glue gap,” he explains. “When the B-pillar is manufactured with our prepreg, the prepreg is cured and bonded at the same time. It adapts to the shape of the metal structure. When this happens, the glue gap between the composite and the metal must be as consistent as possible, because you want to have perfect stress transfer between the two elements. An imperfect glue gap would lead to the occurrence of stress concentrations, and the point of highest concentration would be where the part would fail.”

The film adhesive also ensures than an effective corrosion barrier is formed between the metal and composite parts, which could not be guaranteed using paste adhesives.

The adhesive used for the 7 Series B-pillar is supplied by a third party, but Hexcel recently launched what it claims to be an improved version, a modified epoxy film designed for use with HexPly M77 called Redux 677. Redux 677 cures in four minutes at 150°C and can be used for bonding both aluminium and steel to composites.

It seems adhesives will play a big role in the automotive industry’s future. However, just as the mixed-material approach emphasises the need for the right material in the right place, selecting the right joining method for the right application will be key.

The surface treatment of aluminium and CFRP is a critical step in the adhesive joining process, and directly affects the quality of bonded joints. Aluminium surfaces typically feature oils and other contaminants from production rolling operations, while CFRP surfaces often feature residue of mould release agents. Such surface contaminants affect surface energies and the quality of adhesion, so it is critical that they are removed. This often necessitates the use of abrasive pads, grit blasting or solvents.

A process recently developed at Oak Ridge National Laboratory could significantly speed-up this surface-preparation step. Researchers there have found that using a laser to remove layers of material from surfaces prior to bonding improves the performance of the joints. The laser also penetrates the top resin layer of a CFRP part, leaving individual carbon fibres exposed to bond directly with the adhesive and increase the surface area to improve adhesion.

Test results show that joints made with laser-structured surfaces can absorb approximately 200% more energy than the conventionally prepared baseline joints. Further, the strength, maximum load and displacement at maximum load of single-lap shear joint specimens are increased by 15%, 16% and 100%, respectively.