Al around the weld

Joining aluminium parts gives the bodyshop a number of challenges not encountered when welding steel. But a variety of weld techniques are helping OEMs to adapt and extend use of the lighter metal 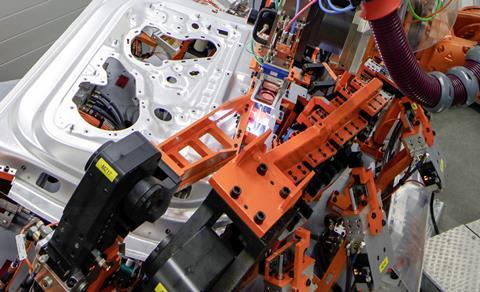 For the A8 body, Audi says remote laser welding results in drastic savings on recurring costs in series production of a structure that is 58% aluminium

As carmakers increasingly adopt aluminium to reduce the weight of their vehicles, they must adapt their bodyshops in order to join components made from this lightweight metal – both with other aluminium parts and those made from different materials.

The use of resistance spot welding (RSW) is ubiquitous in the automotive industry, but using this technology to join aluminium structures presents a number of challenges. Compared with steel, the melting point of aluminium is significantly lower, but it demonstrates a higher thermal conductivity. It possesses roughly twice the thermal expansion of steel, which can lead to it cracking. Meanwhile the electrical resistance of aluminium drops rapidly during the spot-welding process.

As a result of these factors, the welding current must be two-to-three times higher than is needed for steel and the welding time must be cut by two thirds. This means the electric parameters (current and voltage) must be controlled more precisely in a narrower time window, and per-weld energy costs are increased. Furthermore, the fact that aluminium forms a corrosion-resistant oxide on its surface becomes a disadvantage when it comes to welding, as the reaction of the oxide during the welding process quickly contaminates the spot-welding tip, reducing its life.

These problems are not insurmountable, though. For the production of its aluminium intensive F-150, Ford avoids the use of RSW almost entirely. It uses adhesives from Dow Automotive Systems, self-pierce rivets (SPR) from Henrob, Semblex flow drill screws, clinching and laser welding to join the body of the pickup truck.

However, the carmaker has decided to use RSW to join some of its aluminium sub-assemblies, and to ensure that these welds are robust, it uses robotic welding technology from Aro. This technology comprises very-high-force servo guns with built-in force sensors and dedicated process controllers (called iBoxes). For RSW to be successfully employed to join aluminium, the force applied to the electrodes must be precisely controlled. Aro says that iBox manages all of the welding parameters, allowing the welding force to be synchronised with the welding current. These parameters are used to control the servo-actuator and the force sensor, enabling the thermal expansion of aluminium during welding to be managed and ensuring the formation of homogeneous weld nuggets. 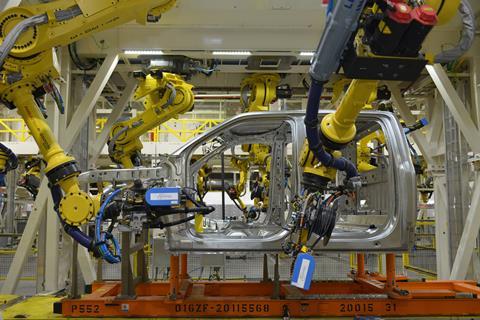 After extensive laboratory testing, Ford has installed around 80 Aro stations in the F-Series production lines, which weld a total of more than 74 million spots per year.

Audi sees the RSW of aluminium as a highly versatile joining process, but it also uses other welding technologies in order to join the aluminium components of the spaceframe for its latest A8. Aluminium parts – in the form of nodes, extruded profiles and sheets – make up 58% of the body of the A8. In order to join certain aluminium parts, Audi employs remote laser welding, an approach it says makes it unique among other premium car manufacturers.

The carmaker claims this technology delivers several benefits: the precise positioning of the laser beam in relation to the welding edge considerably reduces the risk of hot cracking, because the heat input can be closely controlled; the size of the gap between parts being joined can immediately be determined and effectively filled; the high feed rate of the laser beam and low energy use also help to the reduce carbon dioxide emissions associated with the process.

Audi says remote laser welding results in a 95% saving on recurring costs in series production because it eliminates the need for the costly process controls associated with conventional laser welding.

However, Audi uses a mixture of materials to reduce the weight and enhance the torsional rigidity of the A8. A high-strength combination of hot-formed steel components make up the occupant cell, which comprises the lower section of the front bulkhead, the side sills, the B-pillars and the front section of the roof line. An ultra-high-strength, carbon fibre-reinforced plastic (CFRP) rear panel is the largest component in the A8’s occupant cell and contributes 33% to the total torsional rigidity of the vehicle, absorbing longitudinal and transverse loads and shearing forces. A lightweight magnesium strut brace is also used.

Joining all of these different materials reliably necessitated a complete redesign of bodyshop. Joining aluminium to steel is challenging using any process that melts these materials. Getting aluminium and steel to fuse is difficult since the former’s melting temperature is much lower than that of the latter, meaning that a braze joint is formed rather than a weld. Furthermore, aluminium forms intermetallic compounds with almost every other metal during fusion processes. These compounds are usually brittle and often have comparatively low melting temperatures, leading to a joint that exhibits poor mechanical properties. Aluminium and CFRP cannot be welded together at all.

As a result, Audi employs 14 different processes to join the body structure of the A8, including roller hemming to join the aluminium side wall frame to the hot-formed, ultra-high-strength steel sheets at the B-pillar, roof line and sills for the front and rear door cut-outs. 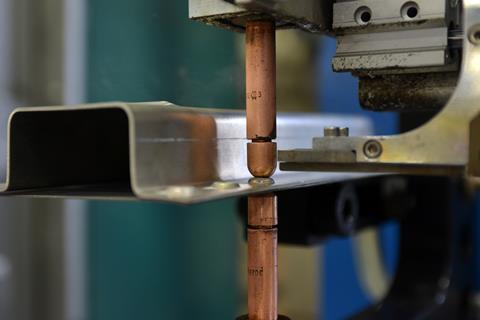 According to Arconic Fastening Systems and Rings, the most economical technology for joining mixed materials would be some hybrid of welding and mechanical fastening. It says this is cheap and easy to spot weld steel to steel, and to an extent, aluminium to aluminium, and effective yet complicated to fasten the two metals together using mechanical means across material families, so why not take the best characteristics of these techniques and combine them? Mixed material welding specialists at the company’s Technical Center, and mechanical fastening engineers at Arconic Fastening Systems and Rings, have worked together to this end to develop the Resistance Spot Rivet (RSR).

An RSR is a consumable fastener that is fed to a steel spot welding station to allow it to perform mixed material welds. This RSR weld yields higher strengths than traditional spot welds, and is flexible enough to join nearly any combination of steel and aluminium sheets or extrusions a vehicle designer may need. Rather than gutting stamping and spot-welding cells to replace them with drilling, assembling and joining cells, the use of RSR requires only that small changes be made to spot-welding guns. When sheets are fed to the upgraded welder, an RSR is dispensed through the added feed system to become part of the weld.

The rivets are available in both steel and aluminium to match the bottom sheet(s) in the joint; the primary target of the weld process. A wide range of top sheets can be accommodated with the RSR joining process, including painted and non-metallic materials, in a wide range of sheet thicknesses. The joints are favourable in terms of the weight and cost to create to blind riveting and flow drill screw joining, and can be used in combination with adhesives. Arconic claims that if joint location in a steel structure can be spot welded one day, the RSR can be used in the same location the next day to join mixed material architectures.

AA7075 was developed in the 1940s and has long held promise for use in automotive applications, but there is one key issue. Although it is nearly as strong as steel and just one-third of the weight, AA7075 is notorious for its susceptibility to cracking during arc welding. When the alloy is heated, its molecular structure creates an uneven flow of its constituent elements – aluminium, zinc, magnesium and copper – which results in cracks along the weld.

Owing to the unweldability of AA7075, and high-strength aluminium alloys in general, these materials are usually joined using riveting and bolting where they are used, such as in airplane fuselages and wings. Recently, friction stir welding (FSW), a solid-state joining technology, has been used successfully to join AA7075. However, the fully mechanised nature of the FSW process prevents its use for applications where access is difficult or the weld shape is complicated. The workpiece also needs to be restrained in well-designed support tooling, making complicated welds in FSW difficult to set up.

A new technique developed at UCLA for welding the AA7075 alloy, usually joined using riveting and bolting due to its susceptibilty to cracking when welded

Now, engineers at the University of California, Los Angeles (UCLA) Samueli School of Engineering have developed a way to weld the alloy. Their solution is to infuse AA 7075 welding wires with titanium carbide nanoparticles. Using this approach, the researchers have produced welded joints with a tensile strength up to 392 MPa. By comparison, welded joints in AA 6061, which is widely used in aircraft and automobile parts, have a tensile strength of 186MPa. Post-welding heat treatments could further increase the strength of AA 7075 joints up to 551MPa, which is comparable with the strength of steel.

UCLA’s Raytheon Professor of Manufacturing and the study’s principal investigator, Xiaochun Li, says: “The new technique is just a simple twist, but it could allow widespread use of this high-strength aluminium alloy in mass-produced products like cars. Companies could use the same processes and equipment they already have to incorporate this super-strong aluminium alloy into their manufacturing processes, and their products could be lighter and more energy efficient, while still retaining their strength.”

The researchers already are working with a bicycle manufacturer on prototype frames made from the alloy, and they suggest that nanoparticle-infused filler wires could also make it easier to join other hard-to-weld metals and metal alloys.

More Joining
To explore the world of automotive joining on AMS click here.