Inside its new bodyshop at Neckarsulm, Audi applies an enterprising mix across materials and joining technologies for its latest luxury sedan. 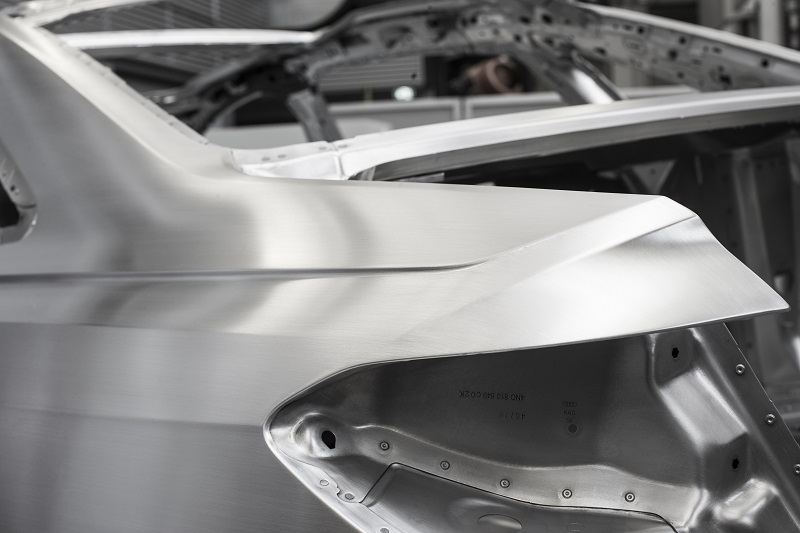 With the new generation of its A8, Audi is opting for a mix of four materials in the model’s weight-bearing body structure for the very first time.The luxury sedan’s structure is a quartet of different lightweight design materials – a mix of aluminium, steel, magnesium and carbon fibre-reinforced polymer (CFRP). Audi see the move as a new stage in multi-material construction that addresses more than simply weight issues but also torsional rigidity – a critical parameter for handling and acoustics.

A high-strength combination of hot-formed steel components make up the occupant cell, which comprises the lower section of the front bulkhead, the side sills, the B-pillars and the front section of the roof line. Some of these sheet metal blanks are manufactured in varying thicknesses by means of tailoring; other blanks also undergo partial heat treatment. This reduces weight and increases the strength, ideal for safety critical areas of the vehicle.

“With laser welding, the lens is close to the weld at the hottest point. With the smoke it soon gets dirty. Here, it’s remote, you can run a lens for many hours. We didn’t think about this at first but its a great benefit” -

In terms of its overall dimensions, an ultra-high-strength, torsionally rigid CFRP rear panel is the largest component in the new A8’s occupant cell. It contributes 33% to the torsional rigidity of the total vehicle, absorbing longitudinal and transverse loads and shearing forces.

For its construction, the panel has between six and 19 fibre layers placed one on top of the other, each layer consisting of tapes 50mm wide. It’s an innovative direct-fibre-layering process developed to dispense with the normal intermediary step of manufacturing entire sheets of carbon fibre. Using another new process, the layered panel is soaked with epoxy resin and cured within a few minutes.

Completing the mix of materials is the magnesium strut brace. A comparison with the predecessor model reveals that it contributes a 28% weight saving. Again for torsional rigidity, aluminium bolts secure the connection to the strut tower domes. In a frontal collision, the forces generated are distributed to three impact buffers in the front end.

Along with Audi’s complete redevelopment of the ASF, the A8 production site at the Neckarsulm plant was also reconstructed, a 41-metre-high bodyshop covering an area equivalent to 21 soccer pitches. Inside the bodyshop, 14 different joining processes come into play, including roller hemming, grip punch riveting, and remote laser welding of aluminium which Audi claims could be a world-first.

Roller hemming is used around the entire front and rear door cutouts. The technique allowed Audi to improve the driver’s field of vision around the A-pillar – engineers gained 36mm at the door cutouts compared to the predecessor A8 model.

The grip punch riveting, which fixes the side wall frame in its position, accompanies the roller hemming process, in turn supported by structural bonding. The development and adaptation of these joining technologies in this application first made it possible to use the material concept in the new A8, and to combine the aluminium side wall frame with the hot-formed, high-strength steel sheets at the B-pillar, the roof line and the sills with their thin flanges.

Dr Dominik Hussmann, joining technology specialist at Audi Neckersulm explains that the grip punch rivet has always been part of the ASF but Audi has fine-tuned the rivet geometry to just a few millimetres. He says: “We’ve managed to narrow and cut that B-pillar so the door entry is a lot wider. We solved this by combining three technologies across aluminium and high-tensile steel.”

The side is connect by four grip punch rivets at four selected positions, penetrating three elements. Dr Hussmann adds: “The sequence of the components is crucial in making the process feasible. The material at the bottom is malleable, deforming without fissures or cracks while the steel in the middle must also accommodate the rivet.”

With remote laser welding of aluminium, Audi is confident it has developed an approach not seen from other premium car manufacturers. The technology delivers several benefits. Precise positioning of the laser beam in relation to the welding edge considerably reduces the risk of hot cracking because the heat input can be closely controlled. The size of the gap between parts being joined can immediately be determined and effectively filled in by means of process control. The high feed rate of the laser beam and low energy use help to reduce CO2 emissions by about 25%.

Audi says that remote laser welding results in a 95% saving on recurring costs in series production because it eliminates the need for the costly process controls associated with conventional laser welding.

Dr Bernd Mlekusch, head of Audi’s lightweight design centre, says “It’s cheaper because of two factors - the flux [less substance is needed] and the lens. With laser welding, the lens is close to the weld at the hottest point. With the smoke it soon gets dirty. Here, it’s remote, you can run a lens for many hours. We didn’t think about this at first but its a great benefit.” The beam doesn’t puncture the material even at the outset — Audi’s system algorithm controls the energy output.

Dr Mlekusch adds:“With new technologies, we are always looking for the next project. Also, the production guys have to know it works in series with 99% reliability. The release process is ongoing so we occasionally have to disturb their normal lines with something new we want to try out.” 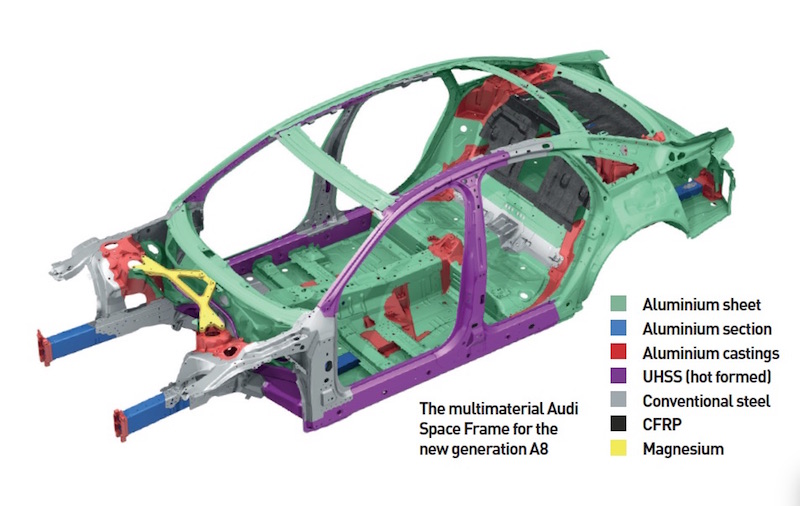 Used in the water drain channels at the rear of the new A8, Neckarsulm adopted a further development of the conventional aluminium MIG welding process based on the established CMT (cold metal transfer) process. The approach is a geometric modification of the inert gas nozzle, which makes it possible to achieve process speeds of up to 50 mm/s and a very fine weld seam appearance. Compared to the conventional MIG welding, it gives a threefold increase in speed for equivalent applications, with considerably reduced heat input and a lower risk of component distortion. To ensure the welding wire is positioned at the component edge with the required precision, the process is performed in combination with a system for automatic seam detection and seam tracking.

Audi sees resistance spot welding (RSW) of aluminium as a highly versatile joining process, helping to deliver improvements in process stability and reproducibility of welding results. Use of welding tongs with higher electrode forces makes it possible to reduce undesirable adhesions from the copper electrode onto the aluminium component. Finally, laser welding – considered by Audi as a classic feature inside its bodyshops – is used to join the roof to the side walls.

The new spot welding tongs are powered by electric motors, and they weigh 35kg less than their predecessors allowed smaller robots to be deployed which in turn means less electricity. LED lighting, and intelligent concepts for ventilation and equipment shutdown further reduced energy requirements.

In terms of humans, about 500 people working in three shifts are employed in the new A8 bodyshop. Most work in the automated area together with robots, and others in the manual area on the bolt-on and finishing lines.

The ASF body’s superstructure begins with the lower welded assemblies, including the longitudinal members, forming the foundation for the front and rear body modules. The latter is produced on a separate level of the site. The next step sees the two subassemblies merged with the floor panels.

The occupant cell takes shape on this underbody: the A, B and C pillars followed by the internal and external side panels and on to the installation of the roof. 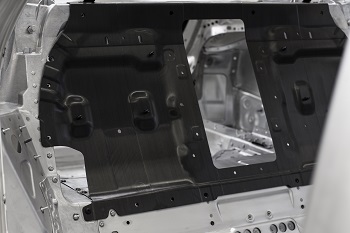 The CFRP rear panel is installed in the car during final assembly – already fitted with all components and subassemblies, including the loudspeakers, the rear louvre, the three-point seat belts and the centre armrest. A fitter uses a handling device to pull the panel through the rear window aperture and into the body. A two-component structural adhesive for preventing contact corrosion is used in conjunction with manually installed rivets to join the rear panel to the metal components.

In the geometry and framing stations, parts are positioned and aligned for the welding process. The body shell is conveyed to an adjacent building where doors and lids – produced there in advance – are waiting to be fitted.

The body proceeds through the finishing line on the level below, and is transported to the adjacent paintshop. After cataphoretic painting, the metal ASF cures in an oven for the aluminium alloys reach their final strength.

Across 20 distinct gates, inline laser measuring equipment checks the dimensional accuracy of the ASF body. The first station examines the rear module substructure, and the final station the finished superstructure. Above and beyond these measures, Audi Quality Assurance conducts spot tests of components, subassemblies and even complete bodies. 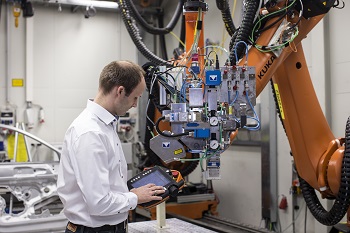 Two CMMs are deployed on the task, working with tactile and optical sensors, an ultra-high resolution optical measuring cell, an ultrasound imaging system and a large computer tomograph (CT). Ultrasound imaging and CT enable the specialists to test many joints in the body without having to take them apart. However, traditional destructive testing methods and auditing of surfaces still form part of the quality assurance process at Neckarsulm.

Ever since the first generation of the Audi A8, the Audi Space Frame (ASF) has been generating strong momentum for lightweight design in automobiles. Since then the premium brand has built more than one million production cars in accordance with this design principle, and it has been consistently building upon its know-how in the use of materials and joining techniques. The result is bodies whose low weight and high rigidity form the basis for greater performance, efficiency and safety.