The sight of human operators working side by side with automated 'colleagues' is a growing one, each working to their strengths and sharing the task at hand 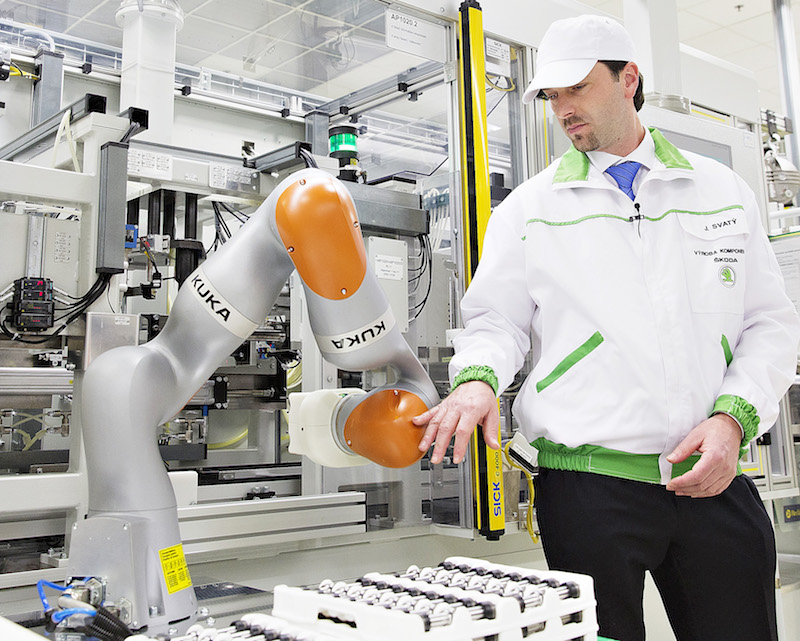 The idea of robots as large, expensive pieces of equipment for arduous tasks in hazardous environments is no longer wholly valid. Though that scenario is still a familiar one, robots are also increasingly being found in 'collaborative' roles alongside human operators in tasks that require not force but dexterity.

That is certainly happening within the automotive industry and one location now making its first foray into the use of collaborative robotics, or cobots, is the Vrchlabí plant of Czech car maker Skoda. Since 2012, the plant has switched over from vehicle assembly to gear manufacture. It now employs around 1,000 people in the production of the DQ 200 direct-shift, seven-speed gearbox. Initial investment in the new role for the plant was some €245m ($276.5m) with production volumes ramping from 1,000 to 1,500 units a day in 2014. This year, a further €25m helped boost that to 2,000 every 24 hours and total output at the plant has passed the milestone of 1m units.

Since just before the end of last year, though, the human operators have been joined by a new 'colleague' – a Kuka LBR iiwa seven-axis lightweight robot. The device, which weighs just 23.9kg, is being used to perform one particular task, gear actuator piston insertion, that Skoda regards as ideal for its combination of accuracy and delicate handling capability.

“The new lightweight robot is a useful and helpful innovation in our transmission production at Vrchlabí,” says Ivan Slimák, director of Skoda Vrchlabí Plant. “The robot makes what was once a complicated production step for our employees significantly easier and safer. We are making strides in the digitisation of our production. By using the new lightweight robot, our Vrchlabí site is becoming significantly more interlinked.” 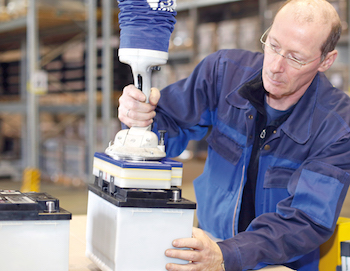 The specific application involved was chosen because the gear actuator piston is very sensitive to any possible contamination by dust, grease or even minor damage invisible to eyes. If any such impairment occurs then the piston will not work properly to the detriment of the whole gearbox. But the deployment of a robot entirely obviates the possibility of such damage. As such the main reason for robot assistance in this case is “quality”, though there is also the benefit of removing from human operators a task that Slimák calls exceptionally monotonous.

In addition, quite apart from a general enthusiasm for innovation throughout the company, the Vrchlabí site itself lends itself to the use of new techniques since it only began its present role as a gearbox manufacturing facility in the early part of this decade. Moreover, the company says that in this instance its decision to implement a new type of production methodology has been vindicated by results. It confirms that 3D scanning for another line has been carried out recently and a second such robot is already being prepared and programmed ready for installation this summer.

But, of course, robots remain the obvious and sometimes the only realistic option for intense operations in environments that are simply impossible for a human workforce to endure. Machining operations that produce large volumes of dust are one such example and a recent installation involving the grinding of die-cast aluminium parts demonstrates what may well be the current benchmark for efficiency and even more reliability.

Guaranteed availabilityProducing such parts may seem a straightforward task but when a German-based automotive components manufacturer was looking to install a new set of robotic cells to machine chassis components it set a very high target for guaranteed system availability – 99.65 per cent. The company that took up the challenge was also German – AutomationsRobotic (AR) based in Massing, Bavaria.

According to AR director Alexander Steiger, the systems integrator has, in fact, designed and commissioned four cells. Each of them is dedicated to a single part which are then supplied to Daimler. One of them, for instance, utilises two six-axis Yaskawa robots – a large MS 80W and a smaller MH 50 – that between them carry out all the component loading/unloading and machining operations. The first of those has a reach of over 2.2 metres and load capacity of 80kg and carries out both materials handling and machining tasks.

The process starts with the transport of components to the robotic cell on a conveyor belt. A window in the cell automatically opens allowing the MS 80W to retrieve the part after which the window closes, hermetically sealing the cell so that grinding operations can begin.

For this, the larger robot moves to a fixed grinding station and carries out various workpiece-guided work steps. It then transfers the part to a clamping fixture where the more streamlined MH 50 implements further grinding processes. Total cycle time is just 30 seconds something that is achieved in large measure by a system design that enables both robots to work at their respective stations simultaneously, so that there are always two structural components in the cell at any one time. Once all the grinding is completed the part is removed from the clamping fixture by the MS 80W and returned to the conveyor belt.

That availability figure, though, becomes even more impressive when translated from percentage terms into everyday language. As Steiger points out it means that permitted downtime amounts to just “five minutes every 24 hours”. A number of factors contribute to this. One of them is the use of sensor-based compensation for the wear of grinding materials so that robot toolpaths can be adjusted automatically in order to maintain quality levels. But the same capability is also used compensate for workpiece variation caused by increasing wear in the upstream mould tools in which the parts are made. In the first instance, five surfaces are always involved while in the second as many as a further 29 may also be affected.

Another factor is powerful dust extraction to prevent both clogging of the robots and the build-up of what might otherwise be potentially explosive airborne concentrations of material. Yet another is the ability to carry out both machining and materials handling on the same robot without any intervening tool changing procedure. In consequence Steiger is confident that the installation “sets the standard” for what automated grinding can currently achieve in terms of speed, reliability and safety.

Meanwhile, another tier one supplier location in Germany has kitted out its working area with a materials handling system that combines manual guidance with complete replacement of the previous need for human muscle power by a powered system. The company is akkuteam Energietechnik. The relatively young outfit was formed in 1997 and is based at Herzberg am Harz. It employs 40 people in a business that includes the provision of starter batteries to several automotive industry customers.

An essential quality control procedure before despatch is the testing of the batteries for possible faults including high-voltage leakage and also cold-start current measurements at specialist test-stations. The batteries are loaded onto pallets and driven to the test-stations on forklift trucks but until recently they had to be both loaded and unloaded from the pallet to the test-station and back by hand. Given that the batteries can weigh from 20-27kg then during the course of a single shift one worker may move a total weight of around 37 tons. The ergonomic inefficiency of this procedure is obvious as is its potential for causing muscle strains and worse injuries if batteries were dropped. In the latter case product damage would also result. 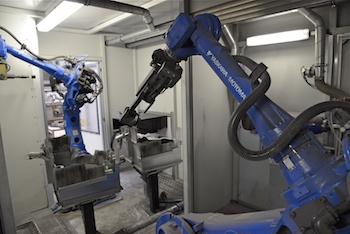 A solution was required though finding the right one was not straightforward. The batteries are far from uniform in shape and size and have different cover geometries because of variations in, for instance, their built-in grips. The solution that has now been implemented is the JumboFlex Battery vacuum tube system from Schmalz, which is specifically intended for the handling of automotive batteries. The system uses a handheld gripping device powered by its own vacuum generation source linked to an overhead crane system that allows loads to be raised or lowered and moved laterally with minimal physical input by a human operator.

A particular feature of the gripper is that it uses sealing foam and suction resistors to enable it to pick the batteries up from above rather than clamping them from the side. This is the key to the system's ability to operate with equal effectiveness independently of the battery's external configuration. According to akkuteam, the system has proven a complete success. Not only has employee strain decreased significantly but so has damage to products.

But while the basic system still incorporates active human involvement, Schmalz indicates that the concept is still compatible with the latest notions of the smart factory. According to Walter Dunkmann, head of business development on vacuum components, the company has already started on this process and was focused on intelligent process communication “long before any mention of Industry 4.0”. Today, he confirms, he company already combines “sensor and actuator functions in a 4.0 compatible device.”

Washing lines The addition of an automated overhead gantry system to what was initially meant to be a purely manual materials handling procedure has improved speed and efficiency in a component washing process that is vital to the integrity of subsequent manufacturing. The location is the Coventry plant of Unipart Powertrain Applications, where one of the products is the stainless steel fuel rail for the Ford Focus engine. 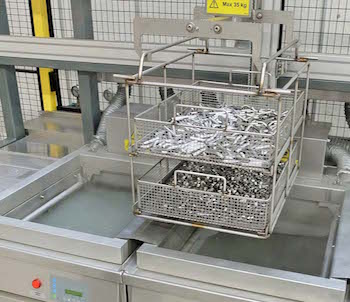 In use, the completed assemblies are required to operate at pressures of 180bar and before shipping to the customer they are tested at that pressure with helium and then at 200bar with air to ensure they can withstand the rigours involved. The manufacturing process for the fuel rails involves joining the component parts together with a copper brazing technique that in turn is heavily dependent for its effectiveness on the cleanliness of the surfaces at the join.

The items involved are bought in by Unipart and it previously relied on its own suppliers to ensure the necessary cleanliness levels. But though that arrangement did enable Unipart to achieve the required levels of product integrity it nevertheless recently decided to bring the washing process in-house.

This was because the procedure was perceived as critical to enabling the company to cope with the increasing pressures – quite literally – that its products would encounter in the coming years.

The company therefore ordered a five-stage ultrasonic cleaning line from supplier Turbex, but did so initially as a manually operated facility in which baskets of components would be moved along an overhead gantry and lowered by hand into each tank in succession. But with current production levels of 4,500 units per week expected to increase to nearly double that – 8,500 units per week – by the end of this year the decision was taken to change to an automated gantry system that allows components to be washed according to a Kanban 'pull' scheduling regime.

In operation now the installation utilises five carriers each capable of carrying one or two baskets of components that move autonomously along the rail. The carriers halt above each immersion bath and then lower the baskets into the bath before retrieving them and continuing to the next stage. Every component necessary for the completed assembly including the main rail, injector cup and tube, collars, inlets and end plugs is involved apart from the mounting legs. The complete absence of human intervention during the procedure means that all five carriers can be in operation simultaneously and total cycle time is just ten minutes.