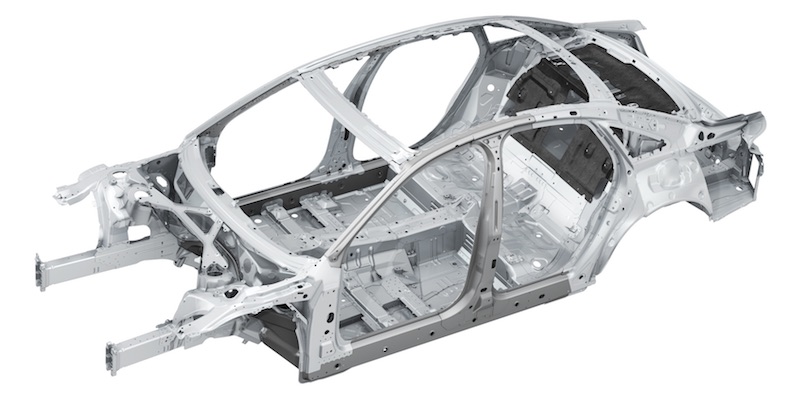 Audi’s decision to use a mass-produced carbon-fibre-reinforced plastic (CFRP) part in the body structure of its A8 may have secured many headlines, but the company’s extensive use of steel rather than aluminium in this model may be more significant. A high-strength combination of steel components make up the occupant cell, which comprises the lower section of the front bulkhead, the side sills, the B-pillars and the front section of the roof line. Indeed, over 40% of the A8 body structure will be made from steel, up by around 32% in comparison with the 2009 model.

About 17% of the A8 body structure (picture above) will be made of press-hardenable steel (PHS), some of which will be supplied by ArcelorMittal. These steels have yield strengths up to 1,500MPa after press hardening. Some of the sheet metal blanks used in the body are tailored to varying thicknesses, and others undergo only partial heat treatment. This reduces weight and increases strength, especially in areas of the vehicle that are particularly critical for safety.

The head of Audi’s Lightweight Construction Center, Bernd Mlekusch, recently told German newspaper Frankfurter Allgemeine Zeitung: “There will be no cars made of aluminium alone in the future. PHS will play a special role in this development. PHS grades are at the core of a car’s occupant cell, which protects the driver and passengers in case of a collision. If you compare the stiffness-weight ratio, PHS is currently ahead of aluminium.”

Kennet Olsson, automotive business development specialist at SSAB, says: “It is a growing trend on the market right now for high-end premium cars, which go from full aluminium to multi-material constructions. This seems to be the optimised solution regarding weight saving and crash performance.”

Steel switchbackJoining technologies employed in the manufacture of the body structure include roller hemming at the front and rear door cut-outs. This mechanical, cold technology is used to join the aluminium side wall frame to the PHS sheets at the B-pillar, roof line and sills. Using this process, Audi engineers have realised improvements of up to 36mm at the door cut-outs compared with the predecessor model. That, in turn, makes getting in and out of the car even more comfortable and widens the driver’s field of vision around the A-pillar – an area that is key to safe driving.

“Audi switching back to steel for the A8 luxury segment model shows clearly that cost is not the only reason that AHSS [advanced high-strength steels] have the edge,” comments ArcelorMittal’s chief marketing officer for global automotive, Brad Davey. “When it comes to safety, the performance of steel cannot be matched. Steel is a flexible material that has continuously evolved to keep up with ever-changing vehicle design challenges. And the challenges of better fuel economy are no different.”

According to the president of flat-rolled steel distributor LexCentral, Bill Douglass, it remains to be seen how significant Audi’s decision to use steel will be. It’s obviously good for the steel industry, but Douglass points out that vehicle manufacturers have been making performance cars out of steel for a long time and that this development follows on from a significant blow for the steel industry.

"Audi switching back to steel for the A8 shows clearly that cost is not the only reason that advanced high-strength steels have the edge." - Brad Davey, ArcelorMittal

“I think the decision Ford made to switch the Ford F-150 pick-up to aluminium really hurt the steel industry,” he explains. “Steel’s single biggest advantage is strength and durability, and it had no competition previously in the truck arena. That was a perfect inroad for aluminium, which is much lighter, but nowhere near as strong.

“In the end, I think the aluminium producers were the only winners in that scenario, as they hadn’t found a market in trucks until this point. The steel industry obviously lost that round, but I think Ford lost as well. GM was able to leverage its message of strength and durability in ads, and they were right: if you want an extra mile per gallon or so, then aluminium will get you some fuel savings. However, if you want to haul a load of bricks, lumber or whatever else you need to do on a job site, steel is the way to go.

“I think the Ford F-150 is still number one in sales, but any significant loss in market share could be attributed to this decision. Time will tell if this was Ford’s ‘New Coke’ moment, as loyalty in the American car market is strong, especially among truck owners.”

Threefold increaseAudi’s choice of steel over aluminium is part of a growing trend that is surpassing even the expectations of steelmakers, according to data released by the Steel Market Development Institute (SMDI). Between 2006 and 2015, the use of AHSS in vehicles has grown from an average of 37kg to 124kg – a threefold increase in just ten years. Furthermore, between 2012 and 2015 the use of AHSS has increased by around 10% each year, well above steel industry forecasts.

This increase is not just being seen in luxury vehicles, but in everyday cars too. “The new Chrysler Pacifica body structure is made up of 72% high-strength steels and is 113kg lighter than the model it replaced,” says Brad Davey.

“It also features ArcelorMittal’s S-in motion five-piece laser-welded door ring, making it one of the lightest minivans on the road, and the only one to earn the NHTSA five-star safety rating. That resulted in the Pacifica winning the North American Utility of the Year 2017 award. The body of the Honda Ridgeline is another example. It is made up of 96% steel, 19.3% ultra-high-strength steel [UHSS], 35.7% high-strength steel and 41.3% other steel.”

The need to reduce the weight of their vehicles has driven carmakers to explore the use of a variety of alternatives to steel as they attempt to comply with increasingly stringent regulations on CO2 emissions and fuel efficiency. For example, all cars sold in the EU can emit no more than 130g of CO2 per kilometre travelled. This target will be lowered to 95g/km in 2021. As we have seen, Ford has explored the extensive use of aluminium. BMW, on the other hand, has invested heavily in the manufacture and use of CFRPs, most notably in its ‘i’ models and the 7 Series.

However, according to a report by Tata Steel, carmakers have mostly been able to meet these targets by increasing the efficiency of their powertrains. The use of lightweight materials has had a positive, but minor, contribution to reducing CO2 emissions. Indeed, the average mass of vehicles sold in the EU actually increased (by around 1%) in 2010-2015. Generation by generation, vehicles continue to get bigger both in terms of their footprint and their volume. Consumers are increasingly purchasing SUVs rather than family sedans, while cars now feature greater levels of safety equipment, in-car entertainment and connected devices.

The use of lightweight materials has helped to minimise mass increases associated with these trends, and much of this is thanks to smarter use of advanced steels, as there has not been a significant shift towards non-ferrous materials during this period. These materials are significantly more expensive than steel, and steel producers have been working hard to improve their product in the face of this competition.

“[Steel] is now thinner, stronger and more exotic in the chemistries used in production,” says LexCentral’s Bill Douglass. “Steel companies have continued to invest heavily in equipment, helping them to achieve advancements in an age-old industry. Steel has always had the advantages of strength, durability, formability, cost and is a great option for recycling. Even the threat of corrosion was solved decades ago, so the only remaining challenge continues to be weight. That is the challenge.”

“Using the latest steel solutions from ArcelorMittal, we have calculated that carmakers can reduce the weight of a car body by 20-25% compared to 2010,” says Brad Davey. “Through our S-in motion studies we are now expanding the scope of AHSS applications beyond the body-in-white to vehicle parts such as doors and seats. In the case of doors, weight savings of up to 34% can be achieved.”

SSAB’s Kennet Olsson continues: “Our strategy is to focus on components that take up the force of energy in a crash, where high-strength steel is the better material than aluminium. CFRPs are very expensive, and while we may see a small increase in the use of these materials, it will still be very limited. Steel is a well-known material in forming and joining and its behaviour is very predictable in a crash. CFRPs are, of course, excellent in weight, strength and stiffness, but they are not very predictable in a crash. Joining is a big challenge also.” 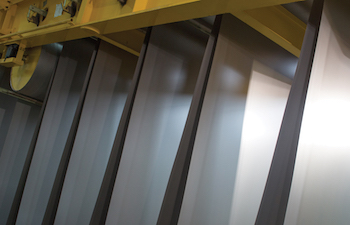 Seeking sustainabilityLooking to the future, Tata Steel says that increasing demand for ultra-low emission vehicles (ULEV) will drive growth in steel supply to the European automotive industry by 4.2m tonnes. Its study shows that demand for advanced steels for the structure of these vehicles will increase by approximately 2.6m tonnes by 2050, as manufacturers look to save weight in cost-effective ways.

Another key growth area for steel will be in the powertrain used in ULEVs, including electric motors and battery cells. Expected to account for a 1.6m-tonne increase in the demand for steel, these components will use greater levels of electrical and plated steels, respectively. High performance electrical steels can improve an electric motor’s efficiency, enhancing range and power, while the lithium-ion batteries commonly used in ULEVs require advanced plated steel.

Tata predicts that aluminium and CFRP will have a relatively low impact on these vehicles for two reasons: firstly, they will remain prohibitively expensive; secondly, they are less sustainable when looking at the full lifecycle, which will be a major, future driver in the automotive industry. Steel is infinitely recyclable with no loss of quality.

“In terms of environmental sustainability, we see our customers moving from tailpipe assessment towards life-cycle assessment [LCA], the true assessment of a vehicle’s environmental credentials, from cradle to grave,” says Chris Wooffindin, automotive marketing manager at Tata Steel. “This assessment confirms some non-steel materials are significantly less attractive compared to steel. We believe, and are seeing, that advanced steels are the answer; offering sustainable solutions which suit the automotive industry for both the immediate and long-term future.”

Douglass concurs, and is sceptical with regard to the environmental credentials of ULEVs. “Very few people realise that the Tesla weighs about 800lbs more than the BMW 5 Series and the Audi A6,” he notes. “As a result, it consumes more energy than its peers. The difference is only in how we measure energy consumption. No thought is given to where the energy used to charge the batteries comes from, or what happens when the useful life of the car or its components is met. Steel is easily recycled whereas plastic sits in landfills and batteries are known to be highly toxic.”