Metal moulding is shaping up to bring the automotive industry a range of savings thanks to a partnership between Husky Injection Molding and the USCAR research group. AMS looks at benefits of ultra-large magnesium castings

When you think of injection moulding materials, metals haven’t traditionally been top of the list among automotive design engineers. But recent research and development work by Husky Injection Molding, in conjunction with Ford, GM and Chrysler’s USCAR research consortium, may change this thinking.

Founded in 1953 by Robert Schad, Husky started as a small machine shop in a Toronto garage.

The company found its niche in specialised mouldmaking and quickly developed into a leader in producing innovative, high-speed injection moulding systems for thin wall containers.

Husky’s manufacturing facilities are located in Canada, the US, Luxembourg, and China.

“The shotguns we produce right now are made of stamped and welded sheet steel,” says Mike Maj, a research engineer with Ford’s Research and Advanced Engineering group. “It’s heavy, so we want to save weight for better fuel economy, and we’re projecting that an all-magnesium front end will save around 21 kilogrammes versus conventional steel methods of construction, which is almost a 50 per cent weight saving.

“Another benefit is that casting would allow us to integrate parts. So instead of three or four stampings that are welded together, we could use just one cast part. For example, we integrated the hood hinge into the experimental shotgun part as well. And, of course, you’re going to realise labour savings whenever you introduce modular systems into production, plus reduced assembly time. And from a dimensional control standpoint you have less stackup, and therefore less need to adjust other parts that are attached to it later on.”

Husky is basically applying injection moulding technology, namely Hylectric and Quadloc thermoplastic moulding systems, but it has been beefed up to handle the extremes of dealing with molten magnesium.

The HyMET moulding machine functions much the same as a plastics injection-moulding machine, except chipped metal alloys are used rather than plastic pellets. These chips are melted on demand in a reciprocating screw injection unit, under a blanket of inert argon gas. The screw meters a precisely controlled ratio of solid and liquid alloy slurry increasing its fluidity and its ease of injection moulding. “It’s basically injection technology that augers magnesium, heats it up into a liquid state, and then injects it,” says Zac Glasford, Husky’s Metal Molding Product Manager. 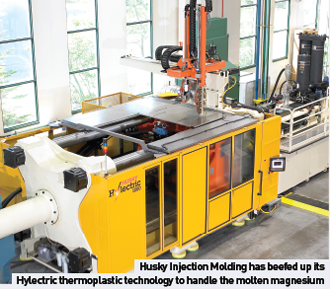 “This technology typically deals with plastic, but we’ve been trying it with magnesium. We heat it up to 600°C and then inject it into the mould at speeds of up to six metres per second.”

Metal moulding is a relatively new technology for automotive, though the idea has been around since the late 1980s. In 1995 the first commercial metal moulding machines were introduced, but it’s only been in the past couple of years that it’s started to take off in automotive, according to Glasford.

“The USCAR shotgun project was interesting because it called for using magnesium, which is typically brittle when cast and doesn’t have the ductility required for crashes,” says Glasford. “With the advent of our hot runner technology, we’ve been able to put a four-drop hot runner onto that part and that provides for much better use of the material (less scrap), but also gives us much better mechanical properties.

“The hot runner we use for magnesium moulding is completely different from our conventional plastic moulding technology. Because of the original hot runners we’ve got the heating technologies, and we’ve drawn on that knowledge, but the basic concept is quite different than a plastic hot runner – the heat involved is a lot higher. With plastics, you’re heating up the hot runner to 300°C, whereas we’re going up to 600°C with metal, so you’ve got more than double the thermal expansion. Plus plastic is very viscous, while magnesium is almost like water at high temperatures, so sealing is an issue. We also had to tweak the original technology to deal with leakage issues.”

Besides looking for different materials to maximise weight savings for ultra-large castings, the USCAR consortium is also looking at metal moulding as a way to cut production costs in producing tooling for smaller volumes of vehicles.

“Right now, structural parts are made from bent and fabricated steel,” says Glasford. “When you bend steel you’ve got progressive dies, there are different tools you have to buy; then you have to weld it together. For large volumes it’s very cost effective, but the industry trending is towards smaller volumes of vehicles. The platform might be for one or two million vehicles, but the individual model has much lower volumes – 100,000 or less. When you have to make custom tooling for each model it becomes very expensive.

The idea is that, if you can cast it in one piece, it will be cheaper. Right now tooling costs for metal moulding are about 75 per cent less than comparable bent and fabricated steel components. If you can mould it, you’re looking at a 20 per cent cost reduction – plus the weight savings.”

For the shotgun experiment Magna worked with Ford on the design of the part. “Once the design was final we worked on our hot runner to ensure we could do it,” says Glasford. “We consciously made the part very tough to make and as we did the trials we slowly made it easier by changing the geometry of the tooling.”

USCAR has produced an initial run of 300 parts and is currently doing preliminary tests, including x-ray examinations. It is also running physical tests like installing the parts on vehicle books. “We call it four poster testing,” says Maj. “It’s a kind of fatigue test that simulates driving the truck down the road. So far the testing looks very promising – I can say that much. We find we have areas with very high elongation, up in the 15 to 20 per cent range, although it’s not everywhere in the part. We were impressed that we were able to fill the tool and that the hot runner system worked. This demonstrates that it can be done and that it could possibly be scaled up to make even larger parts.

We did this on a 1,000-ton machine. If we did it on a 3,000-ton machine we might be able to make much bigger parts. Instead of a shotgun, we could make something like a side door aperture.”

Maj says there were suprisingly few obstacles. “We thought we could get away with much less in the way of draft angles and things like that. We had some problems with parts sticking in the die, but those were quickly resolved just by machining new draft angles.”

The United States Council for Automotive Research (USCAR) was founded in 1992. Its goal is to further strengthen the technology base of the US automotive technology through cooperative research and development.

The group is composed of a number of specialised groups that focus on specific research areas with the aim of:

These goals are often accomplished through partnerships with various stakeholders including the federal government, educational institutions and suppliers.

Shape of casts to come

After the experiments to date, Maj says he can definitely see a future for magnesium metal moulding in producing ultra-large castings. He says OEMs would like to use the technology for body structural parts someday, though he couldn’t comment as to when this may happen.

Glasford agrees: “Over the last several years we’ve proven the validity of metal moulding for automotive. Now we’re refining to meet the needs of more challenging applications. We’ve shown that the hot runner technology will work and we’ve done a number of applications to prove how it works. The next phase of the development is to put it into a customer plant to gauge the cost of operations and how long they will last; but this is in the future. We’ve shown that we can use this technology to produce ultra-large castings with magnesium that has the ductility to be made into structural parts. Plus, the thought of consolidating a bunch of stamped parts into one casting is very attractive to the OEMs; it reduces the number of operations, cost, and adds to the modulization.

They’re looking at making this part into one module that you basically bolt into the vehicle. It’s going to turn six or seven parts into one.”