GM has been honing its machining applications in Hungary for engine supply across Europe. AMS talks to Plant Manager Andor Paizer about his facility

Established by General Motors in 1990, GM’s Szentgotthard plant in Hungary produces the 16-valve Ecotec engines (1.6L and 1.8L) for the passenger car segment, as well as assembling Allison transmissions for the medium- and heavy-duty truck segment. The facility has a production capacity of 460,000 engines a year and employs 800 workers. It is a long-term supplier to several GM plants around Europe and is one of Hungary’s largest exporters. The engines go mainly into Astras, Vectras, Corsas, as well as the Saab 93, plus some Fiat applications, and to Vauxhall in the UK. 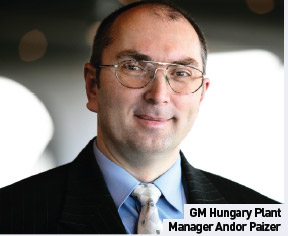 AMS: What are you currently using in terms of machining technology for your engine operations?

Andor Paizer: In terms of production technology, the machining component of our engine production is based on transfer lines and block operation. For the crankshaft operation we utilise turning and grinding equipment, and we have some transfers as well. For engine production the majority of our milling, boring and turning transfers are from several German suppliers, including Hüller Hille, Heller and Gehring.

At our cylinder head facility we have machining centres that work as part of our “agile” systems. They are very flexible. For example, if we have to separate machining lines because of a major problem on one line, we can still continue production at 50 per cent capacity. The machining cells contain four, five and six machining centres; and in case of downtime, we have the capability of continuing production with 20, 40, 60 per cent and so on capacity. With this flexibility, our uptime is around 90 per cent, which is about 10 per cent higher than traditional transfer lines.

AP: Laser honing. We introduced laser honing last Christmas. We needed it for producing our brand new 1.6L XER engine. That was designed for a kind of engine downsizing and we needed to employ laser honing technology to produce the engine. Laser honing involves adding some lasered pockets onto the cylinder hole which helps keep the engine oil in the ‘holes’ along the cylinder wall.

You can produce more sophisticated engines with lower oil consumption, and can even downsize the weight of the cylinder block.

The first step before honing is fine boring. After the fine boring, you go on to the traditional honing operation, and then on to laser honing. We have one laser honing machine, from Gehring, and we can put 2,000 pieces through it per day – 30 second cycle time.

AMS: In your opinion, what’s state-of-the-art for both machining and assembly technology?

AP: I expect that we’re going to see more advanced nut runners. This technology has been improved greatly. You can control the torque, have better control of the RPM, angle, and even achieve a kind of joint stiffness. I expect we’ll see a more secure bolting process. If there’s a problem with joint stiffness, the system can stop the operation. Manufacturers of this technology include: Atlas Copco, Bosch, and Stanley.

I also expect tool technology to develop further. That means we will reach even higher cutting speeds, which means more efficient operations. It means better materials, not just carbide, but diamond tools and coated ceramics.

Even more important are advances in motor spindles. There are two possible ways of driving the spindles: either you have a separate electric motor driving the spindle via a belt, or you integrate the motor direct to the spindle – direct drive. The latter is the moto spindle. It’s far more efficient, it takes up less space, uses less energy to drive it and you can reach higher than 20,000 rpm. Belt driven spindles might reach 8,000 rpm max. Some major motor spindle suppliers include: Weiss, GMN and Kessler. In our cylinder head facility we just use motor spindles. This is definitely the future of turning machines. I expect we’ll see much higher rpms, but it will depend on the tool materials. If you could reach 40,000 rpm, you can reduce the machining time significantly, but current cutting materials can’t keep up.