Getting the right mix

Thanks to Quaker Chemical’s detection of shortfalls in its emulsion and deburring activity, one German truckmaker was able to ensure more reliable transmission manufacturing while also lowering maintenance costs

When a large German car and truck subcontractor encountered several problems with the manufacturing of its transmission housings for trucks it turned to Quaker Chemical for its expertise.

The problems in the machining of these housings meant running the coolant in use at a very high concentration of more than 12 per cent. Even at these high concentrations, the process was not reliable, which led to high quality control costs.

The production line not only machined aluminium but also a number of cast iron parts. Following machining, deburring was carried out with steel brushes – a process that could not to be changed. Furthermore, after the deburring operation, black surfaces occasionally appeared on the aluminium parts which could not be washed off. It appeared not to be staining. Last but not least, the cleanliness of the machine tools and tools was not acceptable. 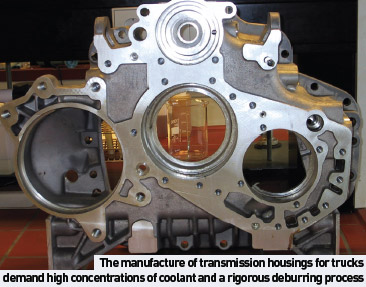 Initially Quaker’s approach was to make a decent baseline. This meant that all key performance indicators were identified and measured over a certain period of time. These included:

These indicators together with the complete process layout formed the basis for the analysis.

This type of activity in itself leads to a close interaction between the people in the field and Quaker’s laboratory to provide a final resolution.

The analysis showed that the wetting and detergency of the emulsion under the given conditions must be significantly improved in order to obtain clean machines and cleaner parts. This was achieved by a more stable and finer dispersed emulsion system.

As well as changing the detergency Quaker introduced a new combined ester technology, whereby film formation and EP properties were improved compared to the incumbent product technology. [An ester is an organic compound formed by the reaction between an alcohol and an acid, with the elimination of water]. This resulted in a decrease of the emulsion concentration to a level of six per cent maximum, a reduction of more than 50 per cent.

With this new concept it also became possible to create an improved filter cake, which helped to make the emulsion cleaner as well reduce filter paper consumption by 20 per cent. The largest issue remaining was the occasional grey discoloration of the parts. The exact location of where this phenomenon occurred in the production line was resolved in a relatively short time frame by simulating the respective process in the laboratory. It appeared that the combination of aluminium parts with steel brushes for de-burring and low presence of coolant formed the ingredients for this thin grey residue. The solution was found by adapting the process of de-burring as well providing the coolant with sufficient inhibitors to minimise the effect of the anode-cathode of both metals in contact.

Finally, the cleaner used after the machining operations was replaced by the coolant itself which reduced the number of fluids in use while ensuring compatibility with the coolant remaining on the parts following machining.

The customer increased the process reliability significantly. The two causes for rejects – lubrication of the coolant and grey residue on the parts – were eliminated. Tool costs did not increase and the customer reduced one chemical on the production line. Filter paper consumption was reduced as was coolant concentration. The resultant benefit reflected in lower maintenance costs regarding both the machine tools and the tooling itself.