The recycling of carbon fibres presents a real challenge for the industry but, with interest being shown by the makers of electric vehicles and sportscars, opportunities are emerging 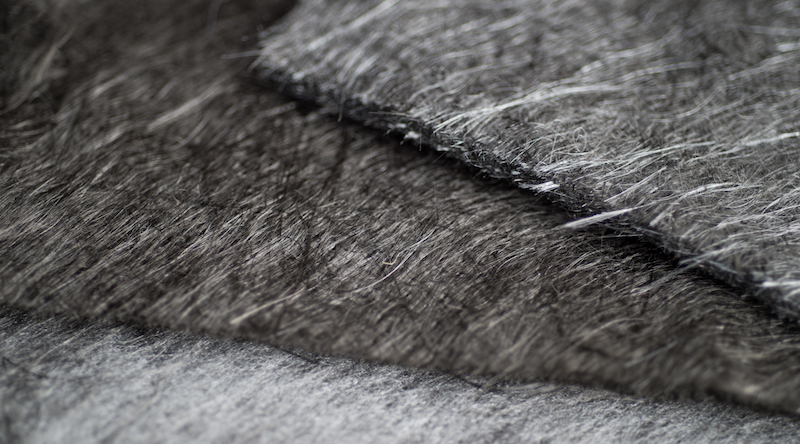 If the automotive industry’s use of carbon fibre-reinforced plastics (CFRPs) is to increase significantly, then efficient methods for recycling these materials must be found. Further, the ready availability of cheaper recycled carbon fibres could be key to increasing the penetration of CFRPs in this high-volume market. UK recycler ELG Carbon Fibre (ELG-CF) has been is at the forefront of work in this area. Indeed, the company’s recycled carbon fibres are already being used in several niche vehicles, and it has recently been awarded its first production contract with a major OEM for a car that will hit the road at the end of 2017. ELG-CF also running end-of-life recycling trials with several OEMs. So, when the company opened the doors of its factory in the UK, AMS went along to find out more. 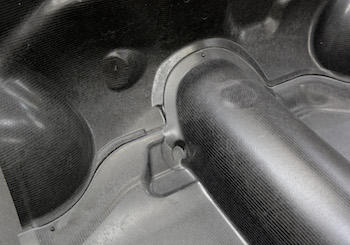 Environmental impactEuropean Union (EU) end-of-life vehicle directives prescribe that 85% of the materials used in new vehicles must be recyclable. Carbon fibre is expensive and, according to lifecycle assessments (LCAs), its production has a significantly higher impact on the environment than competitor materials such as steel and aluminium. Manufacturing operations currently generate around 24,000 tonnes of waste carbon fibre each year, and with the expansion of the carbon fibre industry – in the aerospace, wind energy and particularly the automotive industries – this could reach some 32,000 tonnes by 2021.

While others might see this waste material as a problem, ELG-CF Managing Director Frazer Barnes sees it as a massive opportunity. His reasoning is compelling. He says that the cost of recycled carbon fibre is typically 40% less than that of virgin fibre, and similar weight savings can be achieved through its use. Further still, recycled carbon fibres have less of an environmental impact than their virgin counterparts. Barnes says that recycled fibre uses only around 10% of the energy required for the manufacture of virgin fibre.

OEMs are becoming increasingly concerned with the environmental sustainability of their businesses, so this is significant. According LCAs, a vehicle may need to be driven 155,000km before the fuel savings made possible through the use of lightweight CFRP cancels out the additional energy (in comparison with steel or aluminium) needed for its manufacture. Using recycled carbon fibre for the same application, Barnes says that this balance can be achieved in less than 15,000km.

However, the recycling of carbon fibres, particularly those impregnated with resin, presents a real challenge. The vast majority of CFRPs are made using thermoset matrices such as epoxy, stubborn materials that cannot be melted or reshaped after they are cured. It may seem difficult to believe, but stainless-steel scrap was once virtually worthless, says Barnes. The metal contains impurities such as nickel and chrome, making it difficult to recycle. The founder of Duisburg, Germany-based ELG Haniel devised quality control methods that solved this problem and now every steel mill in the world making stainless relies heavily on scrap material.

The same was true of titanium, the material to which ELG Haniel turned its attention next. It was thought impossible to recycle this lightweight metal back into aerospace applications, but now ELG Haniel operates three recycling yards globally and manages all of Boeing’s supply chain for titanium. With both these businesses performing well, ELG Haniel was looking for the next big thing in recycling, and it identified CFRP.

Increased focusIn 2011, the company bought what was essentially a research and development company, Recycled Carbon Fibre (RCF), which had been based in Coseley, near Birmingham in the UK, since its inception in 2003 and had developed a pilot process for the recycling of CFRP. In those days, Barnes says, “It used to be a celebration if the plant produced one tonne of material in a week”. In 2015, ELG-CF produced 1080 tonnes of material in total.

Around 780 tonnes of this material, in the form of milled fibre, was sold to the oil and gas industries until they crashed at the end of 2015 with the rapid fall in oil prices. However, since 2013, ELG has increased its focus on the development and commercialisation of products for the transportation industry. Barnes says: “The challenge is not so much getting the fibre back, not so much making products, the challenge is developing the market space for recycled carbon fibres.”

ELG-CF has contracts with a number companies that will supply it with all the waste material it needs – some 1,300 tonnes – until 2022. Having this feedstock in place is essential if ELG-CF is to sell to OEMs. Barnes says: “When we talk to our automotive customers, question number one is always cost. Question two is supply chain security. The message we get from these customers is that they’re not going to start a project or even look at our materials until we can demonstrate the ability to supply in their volumes for a long period of time, typically 5-7 years.”

The first stage of ELG-CF’s recycling method involves the removal of any material that may disrupt the process, such as metal. Manufacturing waste from known sources can usually go straight to the furnace, but trials might be needed if the waste is less well understood. End of life parts must be shredded first. At the time of the visit, a mould tool for the underbody of a Formula 1 car awaited its fate next to the gigantic Vecoplan shredder ELG-CF use for the purpose. The machine is capable of processing cured laminates of up to 55mm in thickness, and very little material is lost.

According to Barnes, it has taken 12-18 months of testing to determine the optimum parameters to shred these materials. Key to the process is ensuring that the materials delaminate so that their surface area is increased, which helps with the subsequent pyrolysis process. The resultant shredded laminates are feathery in appearance.

Siphon and incinerateIn pyroloysis, CFRP scrap – in the form of dry fibres, cured and uncured prepreg, and laminates – is heated to 400-650°C in the absence of oxygen, burning-off the matrix material. Harmful gases emitted by thermoset resins during the process are siphoned off and incinerated, in accordance with environmental guidelines, separately from the fibres. Air is then added to the furnace to burn off any residue remaining on the fibres. The furnace is being improved increase its efficiency in an attempt to reduce costs and to ensure that ELG-CF meets its environmental responsibilities.

Importantly, the furnace has the capacity to recycle 150 tonnes of carbon fibre a year, the same – says Barnes – as the production capacity of a medium-sized carbon fibre plant. The process yields a tough and abrasive fuzz of carbon fibre that maintains at least 90% of its tensile strength. After several years of product development, ELG-CF has managed to convert this material into several useful forms. Barnes says: “It’s taken a long time to industrialise these processes as fluffy carbon fibre is a very difficult material to handle.” 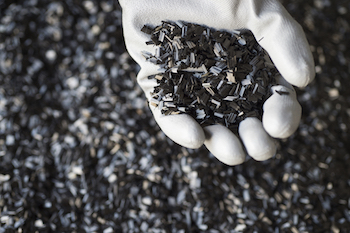 ELG Carbon Fibre’s principle products for use in automotive applications include a short fibre product for the manufacture of injection and compression moulding compounds called Carbiso CT, nonwoven mats that can form the basis of structural sheet moulding compounds (SMCs) and fast-curing prepregs called Carbiso M, and Carbiso TM, nonwoven mats manufactured from recycled carbon fibres blended with thermoplastic fibres, which can be compression moulded to form structural mouldings.

These products are not drop-in replacements for virgin carbon fibre. Indeed, Barnes says that the biggest challenge is creating a market for them. He explains: “We’re trying to create a market for a new material, and we’re making it more difficult for ourselves because we are looking to those new applications of carbon fibre in areas like automotive.”

That work now seems to be paying dividends. The materials are being used in Gordon Murray Design’s CFRP-intensive iStream Carbon chassis, which forms the basis of Yamaha’s MOTIVE.e city car and the new TVR, (launched at Goodwood Revival in September 2017). Further, ELG-CF’s nonwoven mats are being used by Bright Lite Structures to manufacture the CFRP chassis of the Xenos E10 sportscar.

ELG-CF has a lot of headroom to grow. Barnes says that should demand for its materials increase: “We can expand in 18 months to two years; we can bolt-on increments of about 200-250 tonnes to our existing capability”. In comparison, a new carbon fibre plant might take some 3-4 years to come online, at a cost of €150-300 million. This, says Barnes, provides “greater flexibility to adapt to the demands of emerging markets”.