As the company with the largest local market share in Brazil’s passenger car and light commercial vehicle sectors, Fiat do Brasil plays a key role in the Fiat Group. Fiat has manufactured cars in Betim, Minas Gerais, since 1976 and is now responsible for 28% of the company’s global sales volume. The factory is the company’s largest outside Italy, operating on a three-shift basis and producing up to 3,000 units per day. With sales of 607,000 vehicles in 2007, Fiat claims 26% of the Brazilian market.

Brazilians, Italians and Germans are linked by a passion for cars. Fiat do Brasil is one of the largest carmakers in the world’s fifth-largest country. Brazilian Phillipe Massa drives a Formula 1 car developed by Ferrari, part of the Fiat Group, and it is German company Carl Zeiss that provides the measuring technology required to ensure quality levels in every aspect of car production – ranging from Fiat’s mass-produced vehicles, through to one of the world’s most famous racing marques.

In order to further improve its market share by offering customers the best finished vehicle quality, Fiat do Brazil has recently invested in Carl Zeiss’ latest measuring technology. The Brazilian market is of particular importance to Fiat and the company uses measuring technology from Carl Zeiss in order to further improve the quality of locally produced vehicles. In addition to providing this technology, Carl Zeiss also offers Fiat such benefits as training courses in both Brazil and Germany. 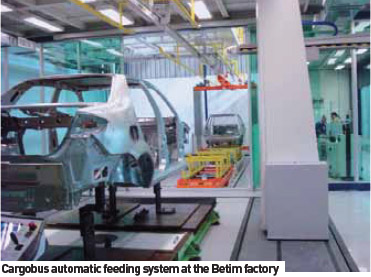 Two Zeiss horizontal-arm measuring machines were recently installed at Fiat do Brasil’s Betim factory, a PRO T premium and a PRO select duplex. Further to purchasing this state-of the- art measuring technology, the carmaker also built a new measuring lab that is now the quality benchmark for Fiat and its suppliers in Brazil.

In the geometric control area, approximately 90 car bodies from a selection of 12 different models are measured daily over three shifts. A feeding system (Cargobus) automatically moves the individual car bodies from the production line to the measuring lab. A camera captures every car body as it is automatically measured.

Fiat is Carl Zeiss’ first customer in South America to use EagleEye navigator. Introduced into Brazil as part of a technology cooperation, the system carries out measurements using laser triangulation.

An application technician from the Spanish subsidiary of Carl Zeiss Industrial Metrology (IMT) spent four weeks at the Betim factory training the Fiat operators in the use of this new technology, with the complete measurement of three different parts being the operational goal during training. According to Vladimir Heleno, Head of Quality Control at Fiat do Brazil, the results underlined the quality of Zeiss measuring technology.

A large number of Zeiss measuring machines have been installed at the various locations of the Fiat Group in recent years. For Dr Joao Lopes, Sales Manager at Carl Zeiss, this continuing co-operation is the sign of a successful partnership, developed through the continuing productivity and efficiency of the coordinate measuring machines.

According to Fiat, the company intends to invest approximately €2.3 billion in Brazil by 2010. The majority of this will be invested at the Betim factory and also at FPT Powertrain Technologies, located in Sete Lagoas, also in Minas Gerais. Additionally, Fiat has announced that it intends to expand the Betim facility to make it the largest automobile factory in the world.

Fiat do Brasil anticipates producing up to 5,200 cars per day at Betim – in 1976 the plant produced around 800 per day. In order to meet this target, while improving finished vehicle quality, Fiat will use equipment provided by Carl Zeiss. With almost 80 years of experience in Brazil, Carl Zeiss looks forward to remaining Fiat’s partner for the delivery of future measuring technology.