The production area of the Transparent Factory will be now be reconfigured to start production of the first ID.3 models at the end of January 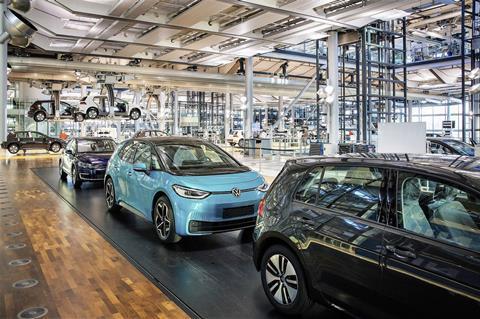 Over 50,000 e-Golfs have been manufactured at Dresden since March 2017, now, over a three-week period starting in January, the production area at the plant will be converted to handle assembly of new MEB platform for the ID.3 model. The first phase of this started in the summer of 2020. As one of seven stations, the “marriage”, where the body and chassis are bolted together, was adapted, while the conversion operations continuing over the winter also included the installation of a system on which the panoramic roof is fitted and the adaptation of the gripping devices for the installation of the cockpit and seat system.

Danny Auerswald, head of the Dresden plant commented: “The end of the e-Golf is also the start of the final preparations for the ID.3. In just a few weeks, we will be opening the next chapter for the Transparent Factory. After Zwickau, we are the second location in Europe to manufacture vehicles based on the new modular e-drive system. Volkswagen is thus underlining the importance of the Saxon plants in the group-wide E-offensive.”

In addition to production at the Zwickau plant and, in future, Dresden, the component plants in Brunswick, Kassel, Salzgitter and Wolfsburg are also involved with the e-mobility strategy, manufacturing components such as electric motors and battery systems. The Emden and Hanover vehicle plants are also scheduled to start producing electric vehicles from 2022. In the medium term, Wolfsburg is to become the pioneering factory for the highly automated manufacture of electric vehicles.