Working with a local robotics start-up in Germany, Volkswagen is exploring a new programming technique that allows assembly workers to teach a cobot all the right moves 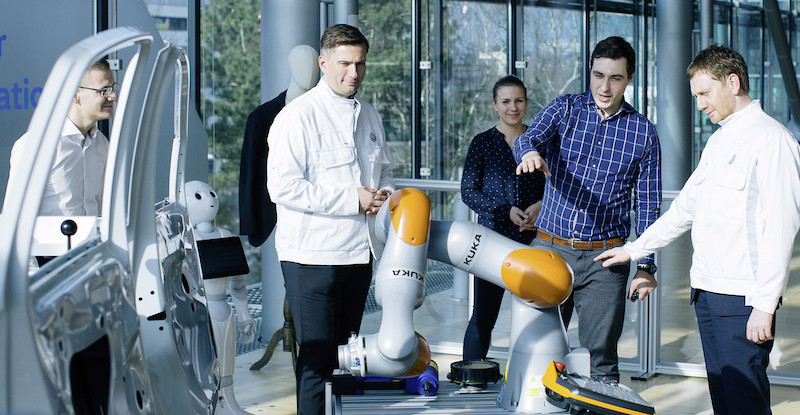 Volkswagen’s Transparent Factory in the eastern German city of Dresden is arguably one of the more unusual automotive manufacturing sites in the world. Named because of its highly glazed exterior it is not only the production location for the company’s e-Golf vehicle – with 72 of the cars being made there each day on a two-shift basis – but also home to a number of other related activities.

For instance, it acts as a showpiece for the automotive industry by allowing members of the public to get within a few feet of the production line to view manufacturing operations close up; it also houses an ‘incubator’ operation where VW cooperates with start-up companies in the development of what it describes as ‘mobility-related’ technologies.

But since the early part of 2018, VW has also been working at the site with another start-up, one concerned with production-related technology, named Wandelbot. Also based in Dresden, the company was founded to bring to the market a highly innovative and unique technique for programming industrial robots, which aims to dispense entirely with need for specialist skills to accomplish the task.

The process involves the use of a jacket, worn by the robot programmer, that is fitted out with an array of sensor and actuator devices linked to the robot via a source of computing power, such as a standard industrial PC. The physical movements of the human are recorded by the system and ultimately translated into corresponding robot motions.

The essential details are confirmed by Marco Weiss, head of new mobility and innovations for VW, who is based in Dresden. He says the basic technology involved was brought to his attention when he gave a talk at the city’s technical university, TU Dresden, where it was originally developed, and that he immediately recognised its potential for helping to solve a common problem in industry – the time delays in production schedules that can be caused by a shortage of skilled robot programmers. This is, he says, something VW itself is aware of in its own operations. “There aren’t enough staff to satisfy demand for programming new robot solutions,” he confirms.

Moreover, for VW this situation is doubly disadvantageous as it not only inhibits current operations but also future plans to implement robotics in other aspects of production. “We want to extend automation out from the bodyshop and paintshop to include assembly operations as well,” Weiss reveals. The major robotics suppliers VW deals with, he says, “simply did not have a solution they could offer.”

The company responsible for this highly innovative technology is, appropriately, itself very new. According to its CEO and one of six co-founders, Christian Piechnick, Wandelbots only formally came into existence in December 2017, despite its origins being in research work carried out at TU Dresden over the previous five years. He is adamant, though, that the capability the company has to offer is unique. “There is nothing comparable available on the market,” he confirms.

Both parties were eager to press on and though talks between the two only started in January 2018, an agreement to work together was soon reached. A test cell was then set up in the Transparent factory in March of that year. Apart from Wandelbots’ own kit the cell is also equipped with a real robot – a Kuka iiwa machine with a 14kg lifting capacity suitable for use in a human-robot collaborative working environment. These are supplemented, Weiss adds, by some further equipment, such as vision systems for object recognition.

Since then three pilot projects have been either carried out or planned for implementation in the cell, each using a specific e-Golf application as its focus. The first, says Weiss, has involved the fitting of a loudspeaker to the vehicle’s door – a task that is currently carried out purely manually but which has proven awkward for the operator involved because of the combination of part manoeuvring and screwing into place that is involved. “Ideally the operator needs a third hand, so we thought ‘why couldn’t that be a robot’,” he recalls, adding that an approach has been tested in which the part handling is taken care of by the robot, leaving the operator free to concentrate on the more complex fixing process.

Meanwhile, the second project has involved an apparently very simple and mundane task – that of applying adhesive stickers to the inside of car doors. Again, though, Weiss says the procedure is “inefficient” when carried out by a human and would be greatly improved if carried out by a robot though he provides no more details on the work carried out in this instance.

But Weiss says the third is the “big project”, which as yet is still at the planning stage and is much more involved and challenging. The task in this case is that of tightening the 16 screws that hold in the vehicle’s safety bulb. More than just the actual physical process is involved, though, because it is “also necessary to document the torque.”

In this instance, at least one other unnamed partner is involved, whose key additional capability involves the use of sensor devices to ensure the safety of human operators working in close proximity to the vehicle. Weiss adds that he hopes that real project work can get underway in the test cell by the end of the year.

By that time Weiss says it is hoped that the loudspeaker application will actually have gone live on the factory floor as a real production procedure. “Our target is to achieve that by the end of this year,” he confirms, explaining that the work in the test cell so far has convinced VW that the approach it is piloting is credible as an actual production programming technique.

Overall, Weiss says the test cell has generally confirmed expectations of the technique. “We have seen that the teaching is very fast,” he says, while also adding that the optimisation of the process through the system’s own artificial intelligence capability is another feature that has been vindicated. The essential task now facing VW before it can implement the technology for real, he indicates, is that of ensuring it can do so in full compliance with all relevant legislation for ensuring the safety of people working in close proximity to robots.

After that Weiss says there are no obvious limitations to how VW envisages the potential for the application of the technique, whether in terms of geography or task. “We want to be able to push it out to VW plants worldwide,” he states. Interestingly, he also says VW expects it to have some use in the programming of heavy standalone robots, though perhaps only for “major initial movements” with fine-tuning then carried out by conventional current programming techniques.

Meanwhile, not too far away at Wandelbots’ offices, Christian Piechnick confirms that the impetus to develop the technology grew from a perception that previous robot programming techniques were lagging behind industry requirements for the speed and flexibility required to meet constantly changing demands. Specifically, he says, there were all too often just not enough people with the appropriate skills to meet the need for frequent reprogramming in environments characterised by short-run production schedules resulting from continuous product modifications. The company therefore aims to enable the complete ‘deskilling’ of robot programming. “We are developing a product that will allow anyone, regardless of their technical background, to program an industrial robot,” he states. “We want to hide all the complexity from users.”

All that is required is for the user to don a jacket fitted out with the various sensors and actuators that enable their movements to be recorded, transmitted and replicated either immediately by a real robot or by a virtual robot in a computer. “Basically, you just show the robot what you want it do a few times, so that the software learns the process and generates the code to enable to robot to perform the task autonomously,” Piechnick states.

Nevertheless, despite the distinctiveness of that basic approach, Piechnick says the hardware it utilises is comprised entirely of “standard components”. The devices in the jacket include, for instance, accelerometers and gyrometers. Intriguingly, he adds that it also makes use of the same technology found in the ‘home button’ of an iPhone to enable a flat sheet of material to imitate the tactile response of a button-push.

Moreover, Piechnick says the software that Wandelbots has written to drive the whole system is “component-based” – in other words it is configured as a number of small, separate but obviously interlinked modules. An important implication of this is that the software becomes, in effect, indifferent to the source of computing power that drives it. It can run in part on local hardware and in part on a remote server. As such, the mix of dispersed computing resource, sensor-driven data generation and practical objective of enhanced flexibility and speed for an existing type of task certainly make the approach compatible with the underlying philosophy of the industry 4.0 methodology.

Piechnick observes that a key factor in facilitating the speedy progress of the development work that has taken place has been the flexibility and responsiveness of VW to any requests Wandelbots made for assistance or extra resources – something he says is perhaps atypical for a major manufacturer. Instead, he says, “it was like working with another start-up.” It is an attitude that is reciprocated by VW, with Marco Weiss noting that Wandelbots proved to be “dynamic and really fast” in its working methods.

In the case of Wandelbots, though, Piechnick adds that that attitude on VW’s part was particularly welcome because the company was simultaneously undergoing rapid growth that saw its own workforce quintuple from just three fulltime employees at the time the project started to 15 by the middle of 2018. Quite part from the work with VW, Wandelbots expected the first commercially available version of its technology on the market under the name ‘Wandelbox’ by around the end of September last year.