The Transparent Factory, Volkswagen’s unconventional facility in Dresden has been repurposed to assemble the eGolf and become the showcase for the OEM’s e-mobility philosophy 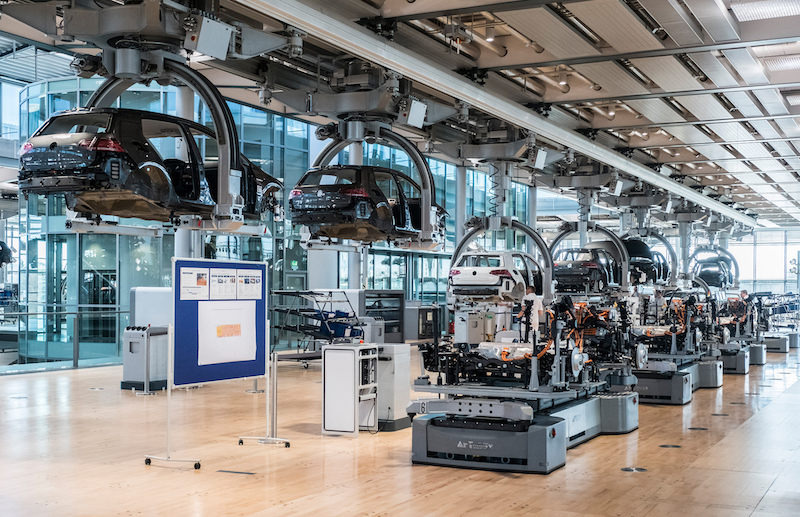 After 14 years of assembling high-powered, premium models, Volkswagen’s Dresden facility entered a new phase in the spring of 2016. With the Phaeton model discontinued and assembly of the Bentley Continental Flying Spur relocated to Crewe, a swift repurposing exercise began at the multi-purpose plant.

It’s known as the Transparent Factory, a name inspired by the literal and the figurative. The glass-covered structural elevations form not just a production and R&D centre, the doors open to around 85,000 visitors each year who can see the assembly lines in operation, hear about the automotive megatrends and even test drive an electric vehicle.

For Volkswagen, its plant at Dresden has always stood out as an unconventional but distinctive facility in the global manufacturing network. Not long after operations began there in 2001, it was described in the German architectural community as a “crystal dream” – a building where “glass was not just a material, but a metaphor.” It’s rare for car factories to evoke such lyrical praise for their outward appearance. For automotive manufacturing plants located in all regions of the globe, it’s the operational, not the ornamental, that takes priority. Understandably so.

The Transparent Factory is not just a production centre but a brand showcase that receives around 85,000 visitors each year

The abstract design and glass elevations at Dresden are a legacy of the building’s original use, assembling the new Volkswagen Phaeton. This was followed a couple of years later by the Bentley Continental Flying Spur. With two of the group’s premium vehicles on the production line, Volkswagen’s concept for the plant was as part assembly line, part showcase; thus, the name Gläserne Manufaktur, or Transparent Factory, was coined.

Clear to seeVolkswagen is now heralding the facility as the brand’s showcase for e-mobility and digitalisation. Since April 2017, the assembly line skillets that once saw Phaetons and Flying Spurs married to 8- or 12-cylinder engines, now convey the new eGolf — and there is more to come, in many shapes and sizes.

Head of the Transparent Factory Lars Dittert says: “The line isn’t restricted by one platform. This is the most flexible factory in the group. We have massive demand for the eGolf right now but we can make any car in the group.”

This flexibility wasn’t possible during the plant’s previous incarnation, set up for the shared platform of the Phaeton and the Flying Spur. During that phase, spikes in demand or subsequent slowdowns would prove challenging. Now, Dittert is confident that the line is ready to accommodate flexible small-series manufacturing of various models in the VW range.

Compact designIt’s a 1.5km assembly line house a building that’s only 150m in length. The clever design of the circuits was dictated by the space available. Besides the striking appearance of the glass elevations, the factory site is also untypical in that it’s located just walking distance from the centre of the city. The site was previously Dresden’s fairgrounds but the attractive 19th century buildings were lost in the heavy bombing raids suffered by the city during the second world war. Volkswagen purchased the site in the mid-1990s and announced plans to open a factory. This surprised local administrators in Dresden who offered other sites on the outskirts of the city. But Volkswagen wanted to stay in touch with the city, customers and others visitors and set about building the Transparent Factory.

The option meant complying with city planning restrictions. For example, the lighting of the building after dark remains quite soft so as to be sympathetic to nocturnal wildlife. Likewise, a speaker system has been installed into the surrounding grounds so that each spring and autumn, territorial birdsong can emitted. This helps to prevent migratory birds from colliding with ‘transparent’ building by

Industrial buildings tend to opt for function over aesthetics, for obvious reasons. Here’s an example where the best of both worlds has been achieved.

Premium feelEntering the main reception to the building, the glass theme evident from the outside is as prominent inside. Any visitor to the light-flooded atrium lobby gets a clear view of much of the production line, progressing steadily on the floors above.

Up on the production floors, the abundance of natural light, the pale maple wood parquet flooring and the unhurried takt times are evidence of the line’s former life among the premium sedans and luxury grand tourers. Even the large robots sport an aesthetically harmonious light grey paint job rather than the manufacturer’s more customary deep orange.

There are 65 operating work stations at Dresden, a drastic contrast to Volkswagen’s other eGolf line based at Wolfsburg. The respective takt times highlight the difference. It’s 12 minutes in Dresden, 70 seconds in Wolfsburg. With around 250 assembly stations, Wolfsburg can distribute work load in a completely different way.

At Dresden, essentially, a worker in a 12 minute takt time will operate on up to 8 stations. At the time of AMS’s visit, the plant operates a single shift system [a second shift was due to begin in March 2018].

About 40% of Dresden’s output heads to Norway where demand for the eGolf is huge. The remaining vehicles supply continental Europe. The Wolfsburg lines supply the UK and the rest of the world, however, the eGolf shares Wolfsburg’s line with all other Golf models. Orders vary but that line can produce around 120 eGolfs per day compared with Dresden’s 35.

The assembly follows three circuits on different levels. The vehicle bodies arrive from Wolfsburg, painted, and buffer into Dresden’s logistics depot. Individually, the vehicles feed through an entry in the corner of the building to join the initial circuit. The first station comprises a ‘baptism’ by robot, with the vehicle identify number being engraved at three points on the body.

The overhead conveyor then delivers the body onto the skillet that will take it through the entire first circuit, elevating and rotating as necessary along the journey. As the newly arrived vehicle body moves on its way, the now empty conveyor slides back to collect the body that has completed the first circuit. Among other elements, the dashboard, headliners, door seals, wiring and tail lights have been applied and the body is ready to be moved to circuit two.

Around 1,000 pieces are assembled for the eGolf. It’s interesting to note that with the Phaeton the figure was around five times greater. Naturally with a premium sedan, a high degree of personalisation and customisation was accommodated. With the eGolf, standardisation is far more prevalent.

About 50% of the parts needed for each vehicle travel inside the skillet. The parts for the rear are stored in the back half, the front parts in the forward section. The other 50% are stored within lineside racks and comprise parts common to all vehicles, regardless of specification. 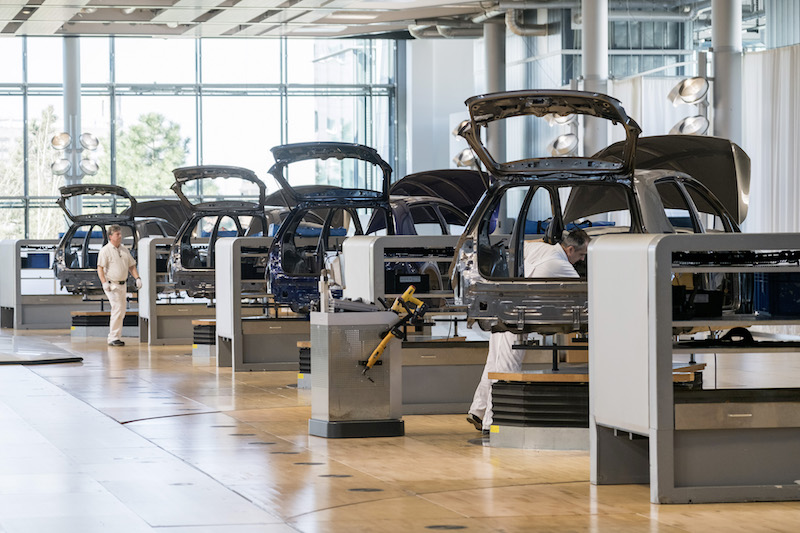 The maple wood parquet flooring makes for an attractive interior but also comes with a simple practicality. Along the assembly circuits, easy-to-remove sections allow access to the underfloor systems for power, HVAC and the magnetic guidance systems that control the skillets and the fleet of AGVs which supply the lineside bins. The arrangement means that as well as maintenance, remodelling of the assembly line is simple to enable.

At the marriage station, the body is wedded with the drivetrain modules delivered pre-assembled from the basement of the factory. The station comprises a bolting machine that emerges from the floor, fixing bolts at 30 points. It’s an automated process adapted from the original operation: the same hardware used for the Phaeton and the Flying Spur has been reprogrammed for the eGolf structure.

A further 10 bolts, inclined or horizontal, are applied at the next station. Rear bumpers are placed on before a fully automated station applies the wheels. The glueing and placing of the windscreen and rear window are also fully automated, with machine vision mounted on the handling robots. Despite the high automation levels, there’s still room for a simple analogue technique. Once glued, the windows have a small piece of white tape applied at the edge of the glass and over the frame. It's a useful visual aid for the quality gate as any shift in the glass before the glue sets will be evident by a crease in the tape.

Trailblazer siteMario Blank, head of logistics and planning at the plant says that Dresden is certainly proving its worth within the Volkswagen network: “People who come here and are amazed. When this factory was built [in 2002] no one was talking about production 4.0 or anything like that. It was so far away. But we can show that we have some concepts here that were forward thinking at that time. For example, AGVs — nowadays everyone is using them but 15 years ago it was pretty unique.”

The team are endeavouring to prepare more smart technologies, Blank says, with much talk about human-robot collaboration: “We are preparing at least four different use cases that we want to bring in this year.”

The factory may not be the fastest by takt time measures, Blank concedes, but as the operations in Dresden are compact, so it is able to attempt innovations and pioneer new techniques. 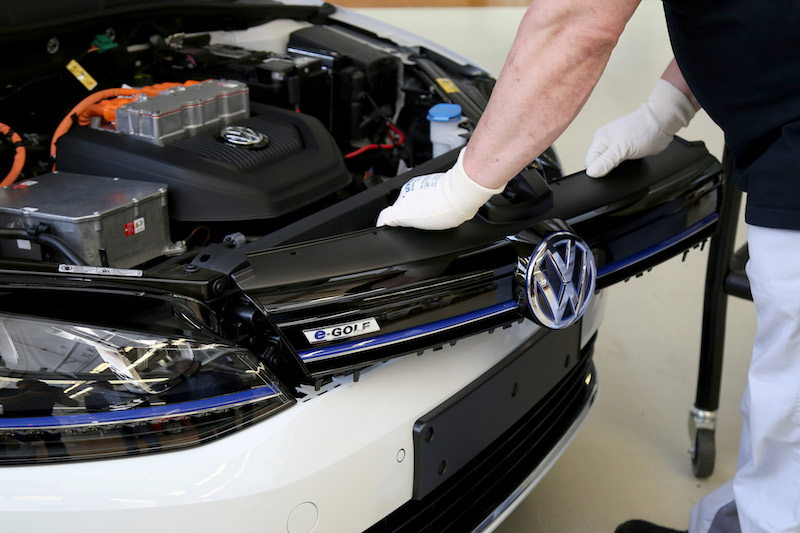 Around 1,000 pieces are assembled for the eGolf, around five times fewer than in the days of the Phaeton

“We always had production here, we always had visitors here, but when we relaunched the Transparent Factory, we wanted to give some more value back to the Volkswagen brand. We aren’t the biggest factory, we don’t have the highest volume and due to their nature the eGolf will never be the cheapest models in the network. Our takt time right now is 12 minutes but we try to take this disadvantage and do something good about it.”

The team are trying to tackle the more complicated steps in production. For example, the headliner, notoriously difficult to place into the car, thanks to its awkward dimensions and overhead positioning. As Blank says, it’s a task that none of the associates are worried about losing: “Automation is the most logical step toward an easier work environment and better support from an ergonomic standpoint.”

So that’s the invitation from Dresden to the rest of the network – before going into mass production, bring the idea to the Transparent Factory and try it. Blank sums it up: “That’s the idea we got to our head of production and he understood. Let’s bring new technology to Dresden first. We try it our here, we prove that it works or we show it’s not beneficial. So we gain the extra value for the brand.”

Since August 2017, the plant has also hosted an incubator for startups companies that work together with Volkswagen’s own developers and customers on a variety of work areas in the automotive industry, including production. Besides its role as a production base, R&D hub, and customer engagement centre, the entire building is a showcase for company. In the wake of Dieselgate, Volkswagen sees the Transparent Factory as a symbol of the brand’s reorientation and a tool in megatrends of e-mobility, autonomous driving and new vehicle ownership concepts.