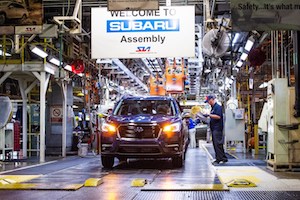 US - Production of the all-new 2019 Ascent SUV, which was unveiled in November 2017 at the Los Angeles Auto Show, has started at the OEM's plant in Lafayette, Indiana. It is the biggest vehicle in the company's portfolio, and will be made alongside the Outback, Legacy and Impreza.

"The Subaru Ascent is a great addition to our production line-up," commented Tom Easterday, senior executive vice president of Subaru of Indiana (SIA). "Production of this outstanding new family vehicle allowed us to create hundreds of new jobs at SIA, and also at our suppliers in Indiana and across the country."

Approximately 200 jobs were created as a direct result of Ascent production at Lafayette. The plant will now churn out 400,000 units per year with the Ascent hitting the market in mid-2018, marking an increase of 100,000 units.

SIA says it has invested $140m in new manufacturing equipment and expansion for the new model. The company has spent a total of around $1.5 billion over the past five years in order to upgrade its facilities.