The RealCar (short for: REcycled ALuminium CAR) programme has aimed to address two major challenges currently facing the automotive industry, namely sustainability and weight reduction. The project is a collaboration between Jaguar Land Rover, Innovate UK, Novelis, Zyomax, Norton Aluminium, Stadco, Brunel University and Innoval Technology. The initial phase of the project has seen JLR successfully use a specially developed, high-strength aluminium alloy (RC5754), produced from recycled scrap aluminium (sourced from the OEM’s press shops) in the body structure of its XE model. This sounds as if it would be very straight forward, after all many OEMs recycle their scrap metal, however, there are challenges to successfully implementing this process. 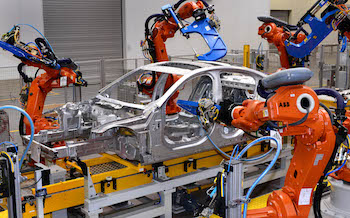 Sourcing materialSurprisingly, sourcing enough of the correct type of scrap aluminium is a challenge in itself. The supply from JLR’s own press shops is finite and arguably reducing as the push for cost efficiencies calls for continual optimisation of cutting and stamping operations in order to reduce waste. Drawing on sources of scrap outside of automotive usage is problematic as the aluminium alloy is very sensitive to contamination especially from steel.

To address the issue of contamination JLR has implemented a stringent process of segregation of scrap metals in its 11 UK press shops across the Halewood, Castle Bromwich and Solihull plants. JLR isn’t the first carmaker to recycle materials for use in its vehicles – Henry Ford allegedly reused the wood from packing crates, used to store parts, for the Model-T’s wooden floor – however, it has invested heavily in scrap segregation, for example £5.8m ($7.5m) in the Halewood press shop, creating 1.8km of conveyors to segregate aluminium alloys from steel scrap. 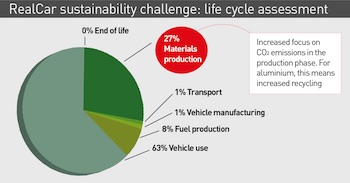 Evaluating alloysJLR is one of the leading users of aluminium in its vehicle structures and has seen impressive weight reductions through the increased use of this material. Tautscher offers the example of the 420kg weight reduction for the new Range Rover Sport over the previous model, exemplifying why using recycled aluminium makes a lot of sense for the carmaker.

A range of aluminium sources and alloys were evaluated and the outcome was the development of re-melt RC5754 (to replace the existing NG5754 alloy), which met the engineering and production requirements with its chemistry optimised to be tolerant to recycling, thus allowing for a closed-loop process. Tautscher explains that higher Si and Fe alloys had been assessed, with the higher Fe alloy taken forward for further evaluation.

The development of RC5754 required a process route and material qualification to be carried out, and has been progressed in partnership with Novelis, a major producer and recycler of sheet aluminium, which undertakes the whole process from scrap recovery and segregation, to smelt, roll and finish. The company has been working on the closed loop process, investing £6m upgrading its Latchford, UK facility, adding a dedicated furnace, and upgrading the casting system, magnetic separation and bailing equipment. The facility has seen production capacity increase by 20%.

In addition Novelis has also established a recycling plant at Nachterstedt, Germany, which has seen an investment of $250m and is the world’s biggest aluminium recycling bcentre according to Andy Doran, the company’s senior manager for sustainability and recycling development.

Reducing energy consumption and costsOne of the major benefits in using a recycled alloy is the much lower energy consumption (up to 95% less) when recycling the scrap aluminium, as opposed to producing new from raw materials. It is believed that 75% of all the aluminium ever produced is still in use.JLR’s XE model uses 25% RC5754 in its body structure, but the OEM wants to increase the content and use it across other models with a more modular approach to the vehicle build, increasing the commonality of parts.

While the aim is to create a closed-loop supply of the recycled alloy using scrap from the press shop, as mentioned earlier the biggest issue is sourcing enough suitable material. Tautscher concedes that this is a limiting factor to wider use. Although JLR has led by example and developed scrap sorting operations in its press shops, it has been a challenging process. Tautscher says he has been closely involved, visiting the press shops to see in detail how the mixed steel and aluminium scrap pressings were being segregated, noting that even a small amount of contamination wasn’t acceptable.

End of life vehicles as potential source of aluminiumThere are other potential sources beyond JLR’s own press shops but it is here that the issue of quality and consistency arises. Looking at scrap aluminium from other automotive sources is an obvious solution, but again it’s far from simple. End-of-life vehicles offer a good source of material in theory but far more stringent processes and better technology for sorting materials are required when the scrapped vehicles are being dismantled to effectively separate the steel and aluminium parts. The fact that many vehicles now feature a mixed material construction further complicates the process.

Also not all the aluminium alloys are compatible; Doran says Novelis is looking to develop recycling processes for different aluminium alloys, which would improve cost savings. Looking further ahead, aluminium scrap from non-automotive sources could be considered if quality and consistency could be guaranteed.

Moving to a circular economyWorking in conjunction with JLR, Innovate UK has part-funded and helped to develop this materials and design exchange-based project. As part of the push for more sustainable transport, the RealCar project has looked to realising the opportunities offered by the adoption of a ‘circular economy’; this, in essence, is to move away from the prevailing ‘take, make, dispose’ philosophy that currently underpins most manufactured goods.

Growing economies have increased the already high global demand for manufactured goods. As such, this demand sees further depletion of material resources and results in increasing costs. So projects such as this are part of the search for an alternative approach to the linear process of materials usage.

If the automotive industry is to make more use of recycled materials then the development of more sophisticated vehicle disposal, dismantling and recycling technologies and processes needs to happen. RealCar highlights what can be done but also the challenges when using recycled materials. The project is now entering its next phase, which will see more focus on the supply chain. 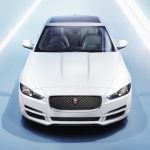 • The Jaguar Land Rover-led research project, part funded by Innovate UK, saw the development of a recycled aluminium-based alloy, which can accept a higher percentage of the recovered scrap. In 2014, the Jaguar XE became the first car in the world to use this high-strength aluminium alloy, developed by project partner Novelis• Closed-loop aluminium recycling reclaims over 50,000 tonnes per year• The Jaguar XE’s aluminium-intensive body shell weighs 251kg, so 50,000 tonnes of aluminium scrap is the equivalent weight to 199,203 XE body shells• RealCar aluminium recycling prevented more than 500,000 tonnes of CO2 equivalent from entering the atmosphere in the same period