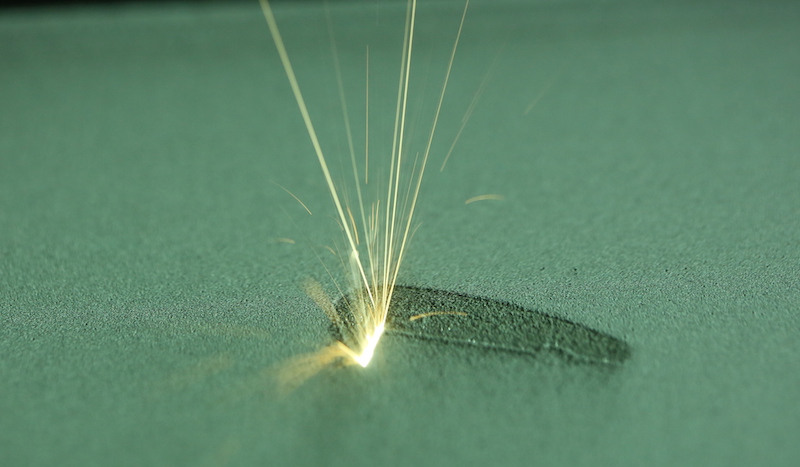 Among the most recent additive manufacturing (AM) trends are the advantages it can bring to mould-making processes. The quality of plastic components in modern cars has increased greatly over the years in terms of precision, visual appearance and surface feel. Now companies in the supply chain, such as Czech Republic-based Innomia, increasingly rely on high technology production solutions, particularly for complex applications. This is why the firm has become an enthusiastic advocate of layer-by-layer, direct metal laser sintering (DMLS) technology from EOS.

Innomia's engineers support automotive supplier Magna in developing production processes for injection-moulded plastic parts. A recent project concerned the manufacture of a component for the central front armrest in a Škoda car, which specifically involved the optimisation of mould cooling. Injection moulding of the glass fibre reinforced plastic component is difficult, as uniform dissipation of heat throughout the tool has a significant effect on minimising distortion and improving component quality as it solidifies. Moreover, temperature control plays a major role in minimising cycle time, as the quicker heat is removed, the sooner a component can be ejected and the next one produced.

The previous tool insert was made of beryllium-copper alloy, which has high thermal conductivity. However, cooling was only possible from one side of the insert, so temperature distribution was uneven. The cooling water needed to be at 16°C to absorb the large amount of heat energy from the insert and component quickly. As the temperature differential was high – around 120°C – the elevated humidity accelerated corrosion, necessitating costly, intensive cleaning of the mould every 1-2 weeks. As a result, designers from Innomia began to develop a new tool insert cooling system with optimised heat removal. The team decided to integrate conformal cooling channels using DMLS technology. An EOSINT M270 system from EOS was used and the metal powder chosen was Maraging Steel 1.2709.

Using 3 mm diameter cooling channels, the company was able to increase hardness through post-treatment to over 50HRc, leading to high wear resistance and low maintenance costs.

Principle of the APF process from Arburg

"The DMLS process enabled us to manufacture an extremely durable component, while at the same time successfully retain the advantages of AM in terms of design flexibility,” says Luboš Rozkošný, CEO at Innomia. "Thanks to the conformal cooling channels integrated into the component, we have inexpensively resolved the main challenge of the production process."

The temperature distribution and associated heat dissipation are now substantially more homogeneous. Since the heat leaves both the tool and the component more quickly, a water temperature of 60°C is now sufficient for cooling. The insert surface temperature does not rise beyond 90°C and the consequent four-fold reduction in temperature differential has removed the air humidity problem and reduced energy consumption. Condensation and cavity corrosion have therefore been eliminated and maintenance intervals have been extended to 5-6 weeks, saving further costs.

The uniform cooling channels work so well that the production cycle is now 17% faster than previously. Furthermore, component deformation is no longer a problem, elevating quality and repeatability. After 370,000 cycles, the total cost savings amount to around €20,000.

Pavel Strnadek, head of tool maintenance at Magna, says: "The issue of injection mould cooling was something that we have been trying to deal with for a long time. We knew how we wanted our improved products to look, but realising it was just not possible using conventional manufacturing methods. AM allowed us to make the breakthrough.”

EOS has in fact recently struck a partnership with GF Machining Solutions that intends to help optimise thermal management during plastic injection using the AM S 290 Tooling solution, which is dedicated to the mould and die industry.

GFMS says that hybrid mould inserts are the most economical solution for parts characterised by both geometrically simple and complex sections. Depending on the material and size, hybrid parts can be created by directly generating the AM part on top of the conventionally manufactured base, or by separately finishing and assembling both parts.

Using this system, the focus is on mould inserts with conformal cooling/heating channels. These inserts can be used for any kind of plastic products in a host of applications. Thanks to AM-enabled conformal cooling, customers can reduce cycle time, increase productivity and improve the overall quality of, for example, a critical plastic part with thin walls, says the company.

It should be noted that AM is even able to improve the moulding of metal parts such as aluminium cylinder heads. Irrespective of the casting process, the flow of liquid aluminium on the mould surface commonly leads to wear, while frequent temperature changes can cause fatigue and cracks. Corrosion and oxidation not only shorten the service life of the mould, but this phenomenon can have an adverse effect on the surface quality of the castings, potentially leading to increased reject levels. 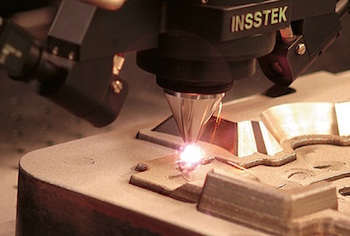 InssTek uses a nickel-molybdenum alloy, Hastelloy, which has much higher heat dissipation than steel and cools precisely where needed

South Korean AM specialist InssTek has collaborated closely with a global car manufacturer to address these issues and identify a solution that not only increases the productivity of the casting process but extends mould life.

InssTek set out to determine a method of combining the strengths of various metals using its direct metal transfer (DMT) technology. Following an extensive investigation of different options, Hastelloy (a nickel-molybdenum alloy) was selected. This alloy has excellent thermal expansion characteristics, is resistant to corrosion and oxidises only at very high temperatures. The relatively low mechanical and physical characteristics, such as impact strength or tensile strength, play a negligible role since in casting aluminium the mechanical stress is likely to be low.

A large mould (570 x 380 x 126mm) for a fuel-saving engine manufactured from heat-treated steel was prepared for the initial trial. Data from simulations that calculated a thermal model for the component was then used as part of the AM process. This was performed using a five-axis 3D MX-1000 metal printer. The nickel-molybdenum alloy print layer thickness varied between 2 and 30mm, with the thicker layers being applied to areas where there was a need for more intensive heat conductivity. Once completed, the mould was put into full production for evaluation.

The results show that Hastelloy has much higher heat dissipation than steel and cools precisely where it is needed. Pores and unnecessary heat stress in the cylinder head casting are also eliminated. Furthermore, no heat checking (the formation of surface cracks formed by the rapid heating and cooling of the component) is formed, resulting in a better surface, while virtually no aluminium residues on the mould surface are evident and the faster dissipation of heat leads to much shorter cycle times.

Since the introduction of the mould, regular inspections have determined that there has been no decrease in casting quality. Due to these initial results, InssTek has now applied the same concept and process to two larger engine models.

A further innovation where the impact of AM is clearly apparent can be seen with Freeformer technology from Arburg.

"There is definite demand for the production of fully functional parts from qualified standard granulates without requiring a mould, whether as one-off parts or in small volume batches,” says Heinz Gaub, Arburg’s managing director for technology and engineering. “In short, our Freeformer and the Arburg Plastic Freeforming (APF) techniques offer an effective AM system for plastic processing companies.”

The system operates on the basis of 3D CAD data and standard plastic granulate – one of the advantages compared with other AM processes. It is equipped with two stationary discharge units which enable the system to process an additional component in order, for example, to produce a part in different colours, with special tactile qualities, or as a hard/soft combination. Alternatively, it can be used to build structures from a water-soluble support material, enabling complex part geometries to be realised.

In the APF process, granulate is first melted in a plasticising cylinder as with injection moulding. Plastic droplets are then applied layer-by-layer on to a three-axis part carrier via the nozzle of a stationary discharge unit using high frequency piezo technology. Depending on the nozzle used, the diameter of the plastic droplets generated under pressure is between 0.2 and 0.3 mm. The moving part carrier is positioned so that each drop falls on to a pre-determined point. As they cool, the droplets automatically fuse together, thus creating desired 3D component, layer by layer.

“On one hand, the system can be used to produce prototypes in the original material so that expensive aluminium moulds are not needed and a new product can reach series maturity much faster,” says Gaub. “On the other hand, it is also possible to produce fully functional components and replacement parts at short notice in small batches.”

Among the OEMs already using AM to supply spare parts on demand is Mercedes-Benz Trucks. Currently, 30 genuine spare parts, such as covers, spacers, spring caps, air/cable ducts, clamps, mountings and control elements, can be ordered and supplied at the press of a button from 3D printers that use selective laser sintering (SLS) technology. 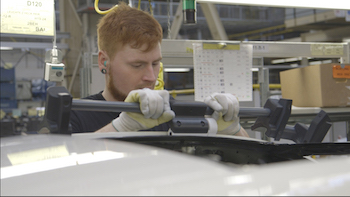 BMW is also using AM for spare parts, as Dr Dominik Rietzel, head of additive manufacturing polymers at BMW Group, confirms: “We use laser sintering or liquid photopolymerisation when we want to create spare parts for classic models, for example.”

Of course, BMW is also using AM to produce customised parts, as well as for series production. According to Dr Maximilian Meixlsperger, head of additive manufacturing metal at BMW Group, the company “has been developing its AM processes for over 25 years”. As a result, BMW “feels pretty confident it can use AM in volume production, a first example of which is a water pump wheel for touring car models, which are built in small series”.

Another common use for AM is assembly jigs and fixtures, a benefit being exploited by Opel. The company is using Stratasys 3D printed tools to attach production parts to its Adam model, including rocker mouldings, roof spoilers, glass roofs and the lettering on rear windows. Opel says it can 3D print assembly tools in less than 24 hours ready for use on the production line, cutting tool manufacturing costs by 90% in the process.

“Customised tools are a further important benefit achieved with 3D printing – we are now able to produce more complex shapes than we could via conventional manufacturing,” says Sascha Holl, virtual simulation engineer – tool design at Opel. “Crucially, this allows us to adapt the tool to the worker and the specific car.”

On the right track 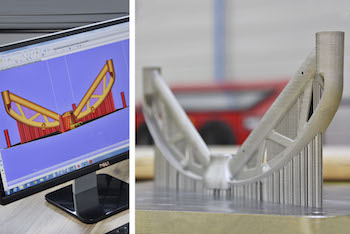 AM technology from Renishaw is benefiting a Moto2 team

France-based Moto2 team, TransFIORmers, is using AM technology in an unconventional front suspension system to gain competitive advantage. The suspension was inspired by the work of French motorbike designer Claude Fior, who recognised the gains to be made from isolating the front suspension from steering forces. Resolving issues of ‘brake dive', the design enables later braking into a corner and faster acceleration out.

To further advance the development of its design, TransFIORmers approached I3D Concept, an expert in metal AM techniques. Using Renishaw's AM250 system, I3D Concept worked in partnership with the Moto2 team to optimise the design of its upper wishbone component, which is critical to the bike's steering.

By taking an AM approach to Moto2 bike design, the weight of the wishbone front suspension component could be reduced by 40%. Comparing the one-piece titanium component with the original welded steel component, a weight saving of 600 g was achieved. In June 2016 the team won its first ever Moto2 GP race at the FIM CEV European Championship event in Barcelona.