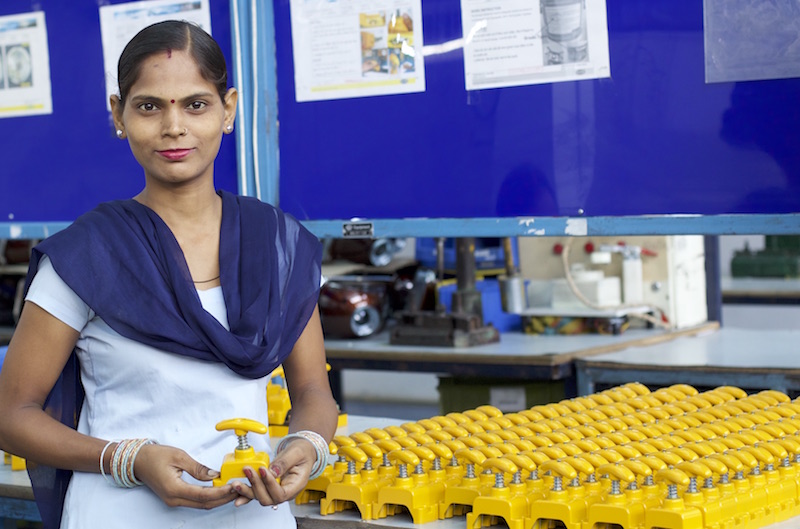 Changes in the Indian component sector have prompted growth in the role of its companies worldwide in recent years. Likewise, European, Japanese and American suppliers have moved into India. Until around a decade ago, the Indian automotive components sector was something of a marginal player in the global industry. However, since 2005, according to the Economic Times of India, Indian component companies have been involved nearly 100 acquisitions outside India, with these transactions reportedly worth US$2.2 billion; in reality, the total value of these deals amounted to more than this because the prices of several deals were not officially revealed.

Global players by acquisitionOne of the most notable trends in recent years has seen several Indian component companies move overseas with a series of large and small acquisitions. For example, Motherson Sumi has acquired Visiocorp (the former mirror company Schefenacker), interiors supplier Scherer & Trier, and parts of the bumper maker, Peguform; Varroc has acquired the global lighting business of Visteon; Amtek has acquired various forging and casting companies such as Neumayer Tekfor, Zelter and Rege in Germany and also the casting, forging and machining business of the Japanese company Asahi Tec; and Uno Minda has acquired Clarton Horn (a horn manufacturer) and automotive lamp maker Rinder, both in Spain. These are just a few of the international acquisitions made by Indian companies who have entered the world stage. 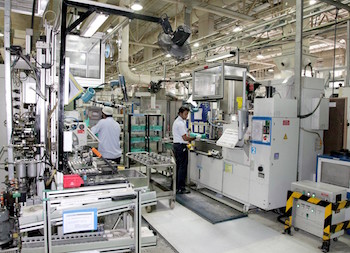 More will surely follow, such as acquisitions planned by Pricol which said in early 2016 that it intended to make acquisitions worth up to Rs 500 crore (US$75m); these will likely be in Germany and the USA and will be designed to take the company into new product segments, alongside the establishment of new factories in existing business areas in locations such as Vietnam and Mexico. In 2014, Pricol made a modest acquisition in Brazil, buying Mellin, a manufacturer of oil and water pumps, a move which gave Pricol direct access to Volkswagen, Fiat and GM which the company did not have before.

A much larger possible acquisition involves Motherson Sumi which has been reported to be in discussions to buy the interiors group IAC; were this deal to go through, the purchase price could be as high as US$800m. This move would, moreover, not only cement Motherson’s position as the leading Indian components supplier, but also instantly transform the company into a key global supplier to most of the European vehicle companies, as well as the North American operations of Ford, GM and FCA.

As well as making significant acquisitions in Europe, Indian companies have begun to move into China. However, here such moves typically involve joint ventures. A very recent example is the JV between Jaya Hind Industries and Montupet of France which should result in a new factory in China to make cylinder heads; the two companies already have a similar JV in India, in Dewas in Madhya Pradesh which began production in 2015. 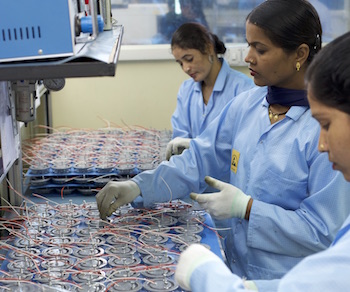 Private equity involvementOne of the notable features of the modern automotive components sector in both Europe and North America in particular is the role played by private equity and venture capital funds, especially in turnaround situations, or in funding high-tech companies, including those in the automotive sector. Such investors are now making similar moves into India, such as KKR investing in Amtek and various Indian funds (including some under the Tata umbrella) investing in a range of technologies, including electric vehicles, electric components and wheels.

International supply pointAs well as supplying growing domestic vehicle production, the Indian components sector has been supplying components internationally for many years; this has focused mainly on engine, transmission and exhausts components, and more recently wheels. For example, in 2016 Steel Strip Wheels announced it had won a contract with Jaguar Land Rover to supply wheels to the UK and also to its new plant in Slovakia. Steel Strip Wheels produces only steel wheels and has no aluminium capability; given that most JLR models have aluminium wheels, this would appear to suggest that some new JLR models, most likely the Defender replacement and export models of Discovery or Discovery Sport, will continue to be offered with steel wheels in some markets.

Soon after the JLR contract was made public, Steel Strip Wheels also announced a five-year deal to supply over 1.7m wheels to PSA, worth around 15m Euros. This will actually mean supplying between 70-80,000 vehicles a year (the number will depend on whether the contract is for four or five wheels, including the spare wheel, per car). The contract will enable Steel Strip to develop its capabilities in flow forming technology, delivering the wheels to PSA plants at Poissy in France and Vigo in Spain, and also to the new PSA factory at Kenitra in Morocco.

Suppliers consolidating in IndiaIn parallel with Indian companies becoming increasingly acquisitive beyond India, as well as supplying components internationally from India, so are several of the leading tier one suppliers increasing their Indian presence. For example, having acquired Getrag’s global operations, Magna – which has 11 plants in the country – has recently won business on the Ford Figo and Aspire models made in India, replacing Indian company Avtec, which is part of the CK Birla group.

Elsewhere, in January 2016, Saint-Gobain announced it would invest around €135m (US$154m) in expanding glass production in Chennai, including its third flat glass factory in the country, as well as a second coating facility. In the same month, Continental announced it would begin manufacturing airbags, ABS and ESC systems, at its plant at Gurgaon, Haryana; production of ECU units in Bangalore will follow in 2018. This comes in the wake of news that Continental has been supplying locally-made passive keyless entry systems for the Mahindra XUV 500 sports-utility vehicle since July 2015. The ABS and ESC systems to be made in India have been developed specifically for emerging markets and the scalable nature of these systems mean they can be applied to both two- and four-wheeler vehicles. Much of the work to develop these systems has been undertaken in India itself, with Continental having over 1,000 engineers in the country.

Also in early 2016, Bosch announced plans to invest US$171m in India to boost its local capabilities in emissions-regulation technologies. India will adopt the new Bharat Stage 6 (BS-VI) norms from 2020. These are broadly similar to the requirements of Euro 6 rules and consequently require significant amendments to existing engines. Indian companies fear the costs of complying with BS-VI rules could add as much as 15% to vehicle prices, but Bosch, which has had a major diesel systems business in India for some years to support the large diesel market there, is committed to developing what it has called “a smart affordable solution” for India.

In 2015 Federal-Mogul Powertrain and Anand formed two JVs in sealing and piston rings, building on a long-established relationship in bearings; in all these arrangements, Federal-Mogul has a 51% stake, with Anand and a number of small Indian shareholders holding the balancing 49%. Also in 2015, Japanese supplier Toyoda Gosei formed a JV with Uno Minda, along with Japanese trading house, Toyota Tsusho. This modest US$11m investment was Toyoda Gosei’s first hose production plant in India, adding to its existing operations in safety, sealing and interior parts.

As well as making significant acquisitions in Europe, Indian companies have begun to move into China - most typically as part of joint ventures

In June 2014, Faurecia announced a new seat frame for India, in Gujarat; the plant opened within a year, with the frames being sent to Magna for integration into seats for Ford. Another seat company, Lear, has recently won its first contract from Maruti Suzuki; this is significant because Maruti has seat making capability within its wider group, namely Bharat Seats and Krishna Maruti. These two component operations have been part Maruti in a similar manner to keiretsu suppliers in Japan being part-owned by a car company. However, just as keiretsu relationships have been steadily eroded in recent years, so it would appear that similar close relations between Indian vehicle companies and their partially- or wholly-owned supplier companies are also being broken. In addition to winning its first contract from Maruti Suzuki, Lear India has also secured its first contract with Honda India for the new Biro model. The Honda and Maruti Suzuki contracts will be supplied from the same plant, which is also likely to be a brand new facility as Lear has run out of capacity at its existing Indian plants.

Joint venturesSome moves by international tier one suppliers in India are in association with local suppliers. For example, through an existing joint venture with Brakes India, ZF TRW will produce electric parking brake (EPB) systems in India from 2017. This JV has been delivering TRW’s ABS technology in India for some years, but the first vehicles to use the locally-made EPB systems have not yet been revealed. Similarly in 2014, Magna joined forces with the components division of Tata to create a 50:50 joint venture to supply seats for the commercial vehicle market.

Another collaborative move involves Henkel, which this year announced a joint venture with the Anand group to supplier sealants and adhesives for both automotive and non-automotive customers in India. The new facility, at Kurkumbh, in Pune, will be operational in early 2018. This will be in addition to existing sealant, coating and glass adhesive operations which Henkel already has in Chennai, Tamil Nadu, Gurgaon and Parwanu. In a similar move, the major Japanese tier one, Denso, has consolidated its presence in India this year by taking a 49% stake in a JV with Pricol, which follows an earlier JV in the HVAC market with Indian company Subros. 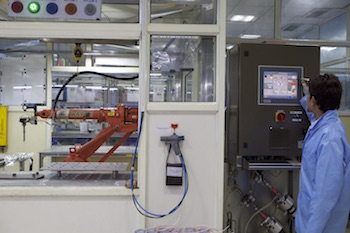 Automotive sector acquisitionsIn another sign of the maturing of the Indian component sector, Indian companies are increasingly buying others within the country. One 2016 examples in the purchase of PAL, for a modest US6.8m, by Minda Corporation. PAL produces reduction gear starter motors and alternators and will give Minda greater access to the commercial vehicle and off-road sectors than it has had until now.

High ranking ambitionIndia’s government and the automotive trade association would like India’s automotive sector to be firmly in the top five market rankings by 2020. For this to happen, not only will there have to be a fourfold increase in market volumes by that date (compared to 2011), but the components sector will also have to be transformed in scale and scope compared to even to today’s industry structure. Just as Indian companies will need to expand domestically – in scale to meet rising production volumes and in scope, adding new component technologies to their portfolios – so will international component companies increase their presence in the sector.

Several of the world’s major suppliers which are India already have been mentioned here but other global players, from Europe, the US and Japan, such as Autoliv, Delhi, JCI, Toyota Boshoku and Valeo, all already have operations in the country. With the arrival of more and more international players in the country, the issue for India is whether its components sector will remain Indian-owned in the long run or it will become subsumed within the global structures of the major suppliers who dominate the developed world. Only time will tell.