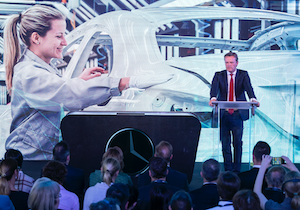 Hungary - Construction has begun on Mercedes-Benz's first “Full-Flex Plant“ in Kecskemét, 90km in the south of Budapest.

The company is investing €1bn in the new facility that will comprise presses, bodyshop, paintshop and assembly lines. It is anticipated that more than 2,500 jobs will be created.

Its first global “Full-Flex Plant”, Mercedes-Benz said, is the next step on the road to smart production. The facility will be operated on the Factory 56 principles introduced in February.

Markus Schäfer, member of the divisional board of Mercedes-Benz Cars, production and supply chain said: “With an investment of €1bn, we are building in Hungary the first ‘Full-Flex Plant’ in the global production network of Mercedes-Benz Cars. In a ‘Full-Flex Plant’, several vehicle architectures from compact models to rear-wheel drive sedans and various drive forms, including electric vehicles, can be flexibly produced on one line. Thereby we lift the production concept of ‘Factory 56’ to the next level.”

To mark the laying of the cornerstone for the plant in Kecskemét, Schäfer was joined by Péter Szijjártó, Minister of Foreign Affairs and Trade of Hungary, Klaudia Szemereyné Pataki, Mayoress of Kecskemét and Christian Wolff, CEO of Mercedes-Benz Manufacturing Hungary Kft. and site manager for the Mercedes-Benz Kecskemét plant.