With virtually all machine shops scrutinising costs, ways to make coolants and cutting fluids go further have taken a much higher priority. One such method is automated filtration and recycling. 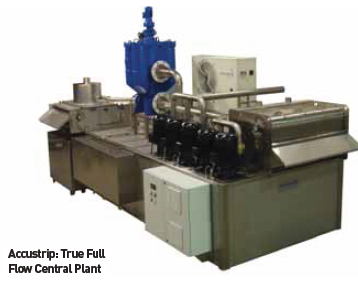 The inherent nature of cutting metal using machine tools leads to the ingress of contaminants such as chips, tramp oil, grease, dirt and dust into the coolant. If not removed, it can lead to the formation of bacteria and fungus; not good for the health of the coolant or the machine operator. In order to re-use cutting fluid, it needs to be cleansed of impurities using filters and separators. Recently, there have been a number of innovative solutions designed to automate this process and provide ongoing savings for the end user.

• Accustrip says its coolant filtration products are based around a patented oil separation system – essentially a mechanical system without moving parts that requires no external energy to operate. The system extracts 99% of all tramp oil from the coolant, says the compant, in a process that requires between 30 - 40 minutes sedimentation time to draw the tramp oil to the surface, ready for skimming. Accustrip has a range of products incorporating this technology, including its ‘True Full Flow Central Plant’, a system that keeps track of each litre of coolant in the system, never allowing clean coolant to mix with contaminated coolant and ensuring extended fluid life, says the company. Because the Accustrip system does not require a reserve quantity of coolant in the sumps beneath each machine it is possible to lower sump coolant levels, leaving just enough to transport the tramp oil, chips and other particles generated by the process to an external collecting vat that pumps the contaminated coolant back to the central treatment area. The benefits are that the coolant never stands still, which means minimal risk of 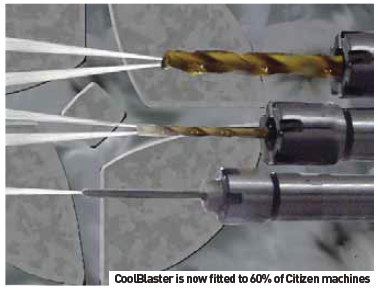 precipitation, or of bacterial or fungal growth, says the company.

“Remember, tramp oil is food for micro-organisms and can make the sump an ideal breeding ground for bacteria,” says Jens Hein Bonde, Accustrip’s Sales and Marketing Director. “Bacteria populations can double every 30 minutes and if allowed to multiply, micro-organisms will ruin the fluid.”

Accustrip has high-pressure unit pumps (HPUs) that can be deployed with cutting tools offering high-pressure coolant delivery (HPC) capability. One HPU in the field is currently working with up to eight different pressures that are controlled automatically by machine M-codes and programmed ahead of the operation. When the machining starts, the pressure from the HPU to the machine is, within seconds, adjusted automatically to the desired pressure. According to Accustrip, high-pressure systems are able to improve machine performance by 25%.

Automated control of the working environment is also desirable when coolant mist becomes a problem. Developed to remove neat oil, oil emulsion mist and smoke, as well as other contaminants such as micro swarf, bacteria and mould spores from the workshop environment, Scandmist units claim better than 99.95% separation of particles down to 0.3μm diameter. At the heart of each unit is a three-stage filtration process that outperforms traditional centrifugal and ionised element filters to produce clean air exceeding all international health and safety standards. Suitable for round-the-clock operation, Scandmist units enable separated oil to be returned to the machine tool for re-use, conserving resources and reducing overall costs. The system’s filters require no cleaning and typically can be employed for more than two years before replacement.

High-pressure situations
• According to cutting tool and tooling systems specialist, Sandvik Coromant, if coolants are to make a difference in modern machining, effective application means that they should be used as jets with pressure, with sufficient volume and correct direction. HPC application can make a distinct difference in regards to heat distribution, chip formation and evacuation, smearing of workpiece material on the cutting edge, tool wear and surface integrity.

Sandvik Coromant’s Jetbreak is based on preciselydirected jets of coolant at 100 – 1,000 bar, the coolant jets forming a fluid wedge between the chip and cutting edge. The contact length is shortened with a lowering of the temperature at the machining zone. By varying the jet data, a variable chip-former is achieved and it is possible to guide stringy chips in a desired direction and even determine the length of chips. Many modern CNC machines have coolant supplied at pressures of between 70 - 100 bar as standard, sufficient to incorporate HPC.

The modular quick-change tooling system Coromant Capto has been used as the standard platform for Jetbreak and is the basis for CoroTurn HP, Sandvik Coromant’s new standard high-pressure coolant tooling for turning.

• It should be said that the application of high-pressure machining should not be seen as a means with which to compensate shortcomings due to other application factors – such as an unsuitable insert, instability or incorrect cutting data. HPC is an optimiser for operations that are established correctly. The concept provides the means for shorter cycle times, improved component quality consistency and higher process security in turning and milling.

An increasing number of machine shops are looking to reduce the amount of coolant used when machining. Cooling with an air/oil mist – minimum quantity lubrication (MQL) – can offer economic and ecological benefits. Promoting its newly-launched MQL trial kit, Bielomatik says MQL systems have the potential to reduce CNC machining costs by up to 15%, without detriment to component quality. A typical ‘wet’ machining operation may use 10 to 10,000 litres/hour of lubricant, depending on application. While much is recycled, natural wastage (as atmospheric spray and adherence to swarf) can amount to between three and 15 litres/hour. With Bielomatik MQL systems, says the company, oil consumption can drop to between 100 and 150 milli-litres/hour.

According to Geoff Bryant, Managing Director of Citizen Machinery UK, “almost 60% of Citizens now sold are specified with CoolBlaster II, a 2,000 psi programmable coolant supply system”. He adds that the governing factor is the need for operational predictability and to maintain high levels of confidence when running untended operations. John Cable, Managing Director of C&M Precision, located in Maldon, UK, has four Citizen M-Series models, each with the CoolBlaster II. C&M supplies car components, connectors, hydraulic fittings, special manifolds and valves. “CoolBlaster has not only proven to be essential for the type of part we produce, but has been very rewarding, giving additional security, especially when running unmanned,” he says.

The latest system is so compact it will fit under the barfeed and is fully programmable, with options of five or 10 independent line feeds able to deliver up to 24.5 litres/ min; an increase of 25% over the previous system. A 5μm filter removes swarf particles, which aids in extending tool life, while an on-board heat exchanger maintains the coolant remains at a constant temperature.

• A significant move towards cutting costs can be gained by reprocessing and recycling coolants, as Peterborough, UK-based engine manufacturer Perkins can testify. Here, a cutting fluid reprocessing facility, installed and managed by Castrol, has cut waste fluid disposal by more than 80%. 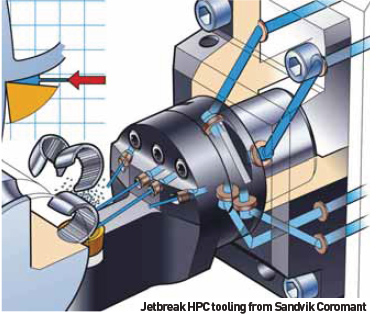 Castrol was contracted to install and manage coolant reprocessing and laundering equipment in the main metal cutting facility. Performance under the three-year agreement exceeded expectations, says the supplier, and a significant reduction in the amount of waste cutting fluid that needed disposal. Commenting on the project, Perkins Manufacturing Manager Chris Baty-Symes explains that the waste fluid volume was actually reduced from 466,000 litres to 45,000 litres, a reduction of over 90%.

“We expected the environmental benefits to be at least ‘cost neutral’,” he says, “but this was a major environmental 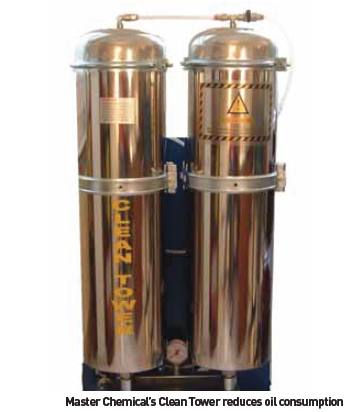 improvement that was ‘cost beneficial’ and meant that the equipment paid for itself within the three year contract period. We are now disposing of less than 10% of the fluid that previously left the Peterborough site as waste.” Castrol is known as an innovator in this technology area. Among its latest developments is a real-time metalworking fluids monitoring unit called SystemRT that automatically takes samples from up to four central metalworking fluid systems to provide instant trending information that can be used to decide on any corrective actions.

The daily grind
• Of course, automated coolant applications don’t all relate to turning and milling; grinding is equally under scrutiny for potential productivity gains. Here, Master Chemical Europe says that its latest innovation can make a valuable contribution by helping the manufacturer achieve optimal returns on cutting oil.

The company’s new Clean Tower oil filtration system is designed to reduce oil consumption by improving its condition to maximise productivity and working life, it says. The unit filters oil down to 3μm, performance that is said to be the industry norm for more complex - and expensive - systems.

• Grinding, by its very nature, poses particular problems regarding coolant filtration, as the metal removed from the workpiece is far finer than that produced by milling or turning operations. For this reason, the recently introduced Eco Filter from Kemet International gets clean coolant and cutting oils down to a level of 0.01μm. An added benefit is the lack of filter cartridges and paper bands, ensuring there is nothing to replace or clean, says the coompany.

The concept is based around a system of two filters, each containing a coil around a second coil which, with the correct flow rate, generates static, attracting the particles. When the filters reach a point of saturation, a sliding mechanism and change of flow moves the sludge into a container and the filters move back into operation, a process that takes no more than 20 seconds, says the company. The unit has been tested and proven automotive manufacturers in Japan.