It was not until the oil crisis of the 1970s, together with the rapid penetration of Japanese-built vehicles into Western markets, that European and American carmakers were forced to update antiquated press lines.

Faced with an increasing demand for lighter, more aerodynamic vehicles that the existing technology could not support, dated equipment (some installed in the 1930s) was at last replaced.

Since then, press lines and the raw materials they use have undergone a series of fundamental improvements to enhance both production times and final product quality.

The advent of faster, more controllable large bed press lines, equipped with automated transfer systems, allow carmakers the ability to produce larger, more complex panels. Following on from this, sheet steel suppliers were pressured into improving the quality of their delivered product, to deliver consistency in thickness and mechanical properties, and reduce the amount of adjustment needed to accommodate materials changeovers. 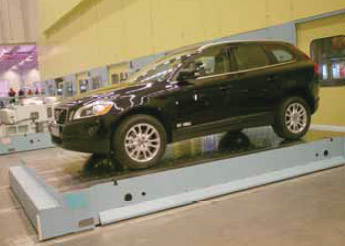 By early 2001, material presses had undergone some major improvements in both speed and flexibility.

The introduction of quick-change systems allowed tooling to be switched in minutes rather than hours. An example was Honda’s Swindon, UK plant, which in the commissioning of its new press shop in 2001 expected to be able to perform tooling changeovers in five minutes. The contrast was with a 1970s-era span for the same operation of between eight and 12 hours.

Together with physical improvements, presses have also been brought into the digital age. Access to a virtual press on which to test new dies and configurations replaces the need to use an actual press, which is both prohibitively expensive and time consuming.

Products such as Dynamic Software’s Optris, or Autoform from the company of the same name, were some of the first packages to use finite element simulation of forming processes to allow the modelling of virtual press shops. The companies claimed significant advantages in shortened tool development times and ‘right first time’ tooling.

Alternatively (or additionally, depending on budget), companies may invest in dedicated off-line try-out presses. Press manufacturer Muller Weingarten described its hydraulic technology as ‘multi-curve’, due to the number of ram motion characteristics that could be programmed using highperformance, variable-speed drives.

The company could also equip its test presses with multipoint die cushions, it said, enabling the rigidity characteristics of the full-size production press to be accurately emulated.

To be considered successful, press line tooling must meet a series of criteria. Individual dies should match precise form and quality standards, while equalling or exceeding expectations of lifetime performance. The die must offer faultless repeatability, yet still be within budget. In 2002, AMS reported on a new technology that looked set to fulfil each of these elements, the Sprayform tooling process, a process owned by Ford and licensed to various tool manufacturers.

As the name suggests, the process used to create Sprayform tools involves spraying molten metal on to a formed blank, in turn creating the required shape. The flexibility of the process makes it equally suitable for creating progression tools used in a transfer press to draw body panels on the one hand, and for injection mould tools used to extrude plastic components on the other.

Compared with many deposition methods, Sprayform is also fast. While at the time it could take several weeks to shape a tool from solid steel, Sprayform can, in its basic form, take only hours.

At Novarc, a Sprayform licensee, the company uses a six-axis Kuka robot to spray 0.8% high-carbon molten tool steel at temperatures up to 2500C, depositing approximately 12mm/hr (up to a thickness of 25mm) on a ceramic form.

Four robot-mounted spray heads work in unison, delivering droplets measuring 0.1mm in diameter at speeds of up to 100m/ sec. The overspray is collected and recycled for use as grit in a blasting medium. Creating the ceramic form can take anywhere up to three days for casting and curing.

Temperature control is key to the Sprayform process. “You need a control strategy to manage the spray deposit and keep a good temperature uniformity,” said David Field, Managing Director of UK-based Novarc. “We keep temperature uniformity to very, very high levels.” Another advantage of the system is the process stability. “This is the only process where you can spray hard tool steels and maintain zero distortion,” claimed Field.

While pressure casting continued to offer an economical method of producing large quantities of complex, high-tolerance parts, the introduction of stronger steels highlighted the need for stronger, harder die materials. Companies such as Swedish steel producer Uddeholm have long offered a range of die materials, including steel grades such as Orvar Supreme, Vidar Supreme and Qro 90 Supreme. With body-in-white operations moving towards larger components, thinner material thicknesses, more complicated designs and higher tolerances, dies were being subjected to higher levels of thermal and mechanical stress.

The result was heat checking (thermal fatigue cracking), gross cracking and wash out damages, all serving to severely limit die life. In answer to these problems, in 2003 the company introduced a new die steel, Dievar.

A high-performance chromium-molybdenum vanadium hot work tool steel, Dievar had been developed to improve the potential heat checking resistance beyond that of other commercially available die steels, said the company. Due to its hardening ability, Dievar was able to retain its properties for even the largest cross sections, said the company.

DaimlerChrysler Canada was one of the first to try the new die steel. The carmaker already produced an extension top slide, which had been prone to soldering and, especially, heat checking, due to deep ribbing and a very thick wall in localized areas causing hot spots on the tooling surface. 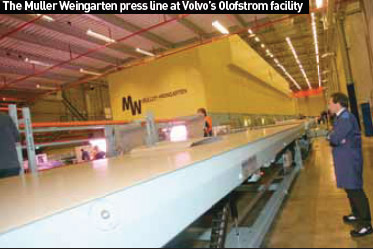 On top of this, the shape of the slide limited the diameter of the cooling lines.

Because of these problems, DaimlerChrysler had found it necessary to prepare two slides made from premium H13 in order to achieve the number of required shots. It was rated at a hardness of 42-44hrc, which could not be increased due to cold start ups and risk of gross cracking.

Replacing the H13 with Dievar, DaimlerChrysler gained a die with an increased hardness level (46-48hrc), and achieved 131,000 extensions with the new slide, five times more than the previous tooling.

Although press transfer lines were once being written off as not meeting the flexibility requirements of modern manufacturing, the equipment has been reinvented to such a degree that such claims now themselves seem oddly dated.

One of the most recent press installations was completed in late 2008 at Volvo’s Olofstrom production site in Sweden. The site produces as many as ten different parts for the new XC60, including door inners and outers, wheel wells, A-pillar supports and bonnets.

Designed by Muller Weingarten, the facility is very much a reinvention of established, sequential, piece-part manufacturing procedures tailored to suit modern requirements. Measuring 80m x 21m, the press facility includes (in sequence) a die storage area, de-stacker, five presses (each with four beds measuring 5m x 2.8m) and an end-of-line handling area. The first presses can exert 3,200 metric tons, with each of the remaining four offering half that force.

Jonas Knutsson, Communications Manager at Volvo, pointed out that it is the exceptionally hard steels that require this degree of metal forming, yet the presses demonstrate an in-built flexibility by being able to handle relatively soft metals such as aluminium.

In operation, it is the first press that forms the part, with each of the remaining four presses carrying out finishing operations. Each of the presses contains four parallel dies, enabling simultaneous pressing of four parts. Alternatively, with different dies then different parts can be made in the same press. The maximum individual part weight is 100kg.

Inter-press operation is achieved by five ABB 7600 robots, positioned downstream of the presses. A seventh axis allows the robots to reach across the full width of the press to access all beds. With an overall stroke rate (per die) of ten per minute, the installation can produce a total of 40 parts per minute. As Knutsson explained: “Hydraulic presses are usually slower than their mechanical counterparts, but in this case, the stroke rate is equivalent to a mechanical press line.”

That said, the factor that contributes most dramatically to the line’s productivity is the speed of die changes. All 20 dies can be switched out and replaced in just three minutes, compared to a time of between 20 and 30 minutes for older-generation machines. This is due to the die storage facility, the rapid transport (by AGV) and co-ordinated, automated installation of the new dies, and the automated tool changes for the line-side robotics.

Said Knutsson of the new installation: “The whole system has been designed to deliver lean and flexible production. All the alternative ways of achieving these objectives would have been much more expensive.”

With such advances, it is clear to see the humble press line has come a long way since its distant cousins in the 1930s graced automotive production lines.