But these lines needed more flexibility if parts producers were not to be left with redundant equipment. An order for 250,000 parts later reduced to 50,000 was a waste of capital.

As Bill Kalp, Director at the Detroit operations of Ingersoll Milling Machine, put it: “If they wanted a V8 engine, they cranked up the V8 line. If they didn’t, it sat there. If the energy crisis hits … and customers start demanding four cylinders, automakers want to ramp up that four-cylinder line and make the V8 go away.”

Manufacturers used a variety of techniques to improve a given unit’s flexibility and allow it to switch between jobs.

BMW installed nine Renault Automation Comau Urane 25 machining centres at its Munich engine plant to produce cylinder heads. Due to the variety of components and number of operations, each machine had a 90-tool magazine, with a gantry system loading and unloading each centre. The flexibility of the linear motors allowed the Urane 25s to machine the combustion chamber, a task usually completed by dedicated machines. Yet linear motors were not always considered a robust solution. 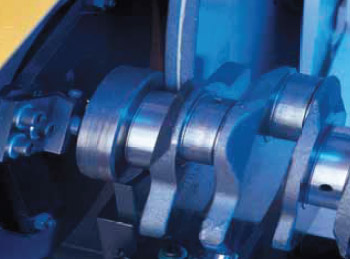 Grob, for example, elected not to use this style of operation due to anticipated problems with swarf and dust contaminating the magentic motors, as well as the need to sufficiently protect the magnetic plates with guarding.

Multiple spindles were another way to increase both flexibility and efficiency. Spindles could work individually, in parallel or in combination with others. An example was introduced by Honsberg Lamb, a division of Unova, and included such models as the Mach 1-500 and -630.

As a further benefit, these units could also machine magnesium. Cross Huller, another company, even introduced a four-spindle machine, called 4-Cut, for flexible and high-volume production of small parts.

Modern abrasive machining processes are, in general, much better controlled and significantly faster than their predecessors.

Computerized control of the machines, coupled with electronic and digital control of feature dimensions, provides both sensitivity and versatility.

As a further advance, the early part of the present decade saw superfinishing machines that virtually eliminated the peaks and troughs associated with standard machining.

Superfinishing works through a combination of rotary movement and short-stroke oscillation of the tool parallel to the centre line of the workpiece.

It allows effective metal-to-metal sealing at extremely high pressures (in the case of direct injection diesel engines), and also avoids the need to ‘run in’ powertrain components to shave off excess material before stressing the parts. As an added bonus, the accuracy then achieved serves to improve vehicle NVH levels.

Form errors can also be largely consigned to history, as waviness, out-of-roundness and feed spirals are banished due to improved process control. One of the main suppliers of superfinishing systems was Germany’s Supfina Grieshaber. The company says that less precise machining methods can account for between 30- 40% of the measured tolerance on a bearing surface diameter.

During the process, the superfinishing tool, which can be either a solid stone or abrasive tape, maintains contact with the workpiece over a relatively large area. While stones are pre-formed to the desired profile, tape-based superfinishing uses custom shoes to hold the abrasive in contact with the workpiece. Stones are available in a wider choice of abrasive grades, while tape offers a fresh abrasive for each workpiece, resulting in improved consistency.

Superabrasive machining, using such materials as cubic boron nitride (CBN) and polycrystalline diamond (PCD), has further been found to suit some process applications. It has a capacity for heavy stock removal – even to the point of supplanting conventional metal cutting equipment.

By the middle of this decade, machine tool producers were faced with increased unwillingness by customers to bear the cost of new equipment. Combined with the pressures of emissions, pollutants and recycling, the sector was facing challenges from other processes, including powder metal forging.

In addition, vehicle manufacturers were switching from mechanical to electronic systems. Oliver Chas, head of the

Technical Department at Cecimo, the European machine tool builders’ association, illustrated the uncertainty: “Mechatronics will have an impact on our business as suppliers of manufacturing systems,” he said. But “we don’t know exactly what that impact will be.”

Phil Ramsey, Manager at Delphi Automotive Systems (UK), noted that machining equipment was having trouble keeping pace with emissions regulations and the related reduction in tolerances.

Producing 20,000 injectors a day, or one every 10 seconds, tolerances must be held to within one micron, or down to 0.2- 0.5 for critical areas such as the injector nozzle hole.

Machine tools, though, have a trump card, said Ramsey “The trend is that the machinery itself is becoming far smarter and far more intellectual.” He noted that typical machining centres have gauging capabilities to check parameters and make adjustments.

A further threat to machining could be the growing prevalence of drive-by-wire systems, though some engineers disagree. Damien Harty, Chief Engineer at Prodrive Automotive Technology, commented that although the system could impact vehicle design and preparation, the effect on machined parts would be minimal.

Harty added that the internal combustion engine would, for the forseeable future, remain an integral component, with drive-bywire componentry only influencing how the engine would react to driver inputs. Yet a move to electronic control would still require miniaturization of machined components and ultra high levels of precision. Investment in the production of smaller parts with improved tolerances would be regarded by many as money well spent. 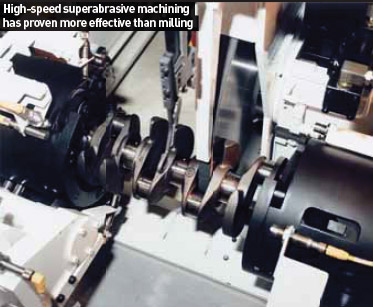 In 2003 AMS reported that the transfer line was maintaining its position as a tool for manufacturing machined parts, due in no small part to its ability to handle production of non-round prismatic parts such as engine blocks and cylinder heads. It was also relatively easy to alter when product lifecycles come to an end.

To match this flexibility, companies such as EMAG released machining centres incorporating many of the features associated with transfer lines.

Based on a modular design that featured a polymer concrete bed, all versions offered the ability to both green and hard machine, with or without coolant, said the company.

Different models could be configured to cater for various combinations of machining, turning, milling, drilling or grinding, including shaft work, it added.

Yet as the decade progressed, so did machining technology, so that machining centres became viable alternatives to transfer lines. In 2006 both Honda, at its Swindon UK facility, and Chrysler were looking to replace transfer lines with banks of CNC-guided equipment for engine production.

“Certainly the trend for us is going away from the traditional transfer lines,” said Grant McPherson, Director of Production for Engine Weld and Paint at Honda.

“Though we will still have a mixture here, we’re looking at flexibility and multiple models. Our machining line is currently producing three different models... and we have to be able to change reasonably quickly.”

Despite the benefits, cell-based flexible machining had its drawbacks. Not the least of these was that it demanded far greater skill by operators.

“They need to be more capable from an intellectual standpoint so they can grasp the adjustments,” commented Brian Harlow, General Manager of Transmission/Casting/Machining Manufacturing at Chrysler. “Flexibility gives you the ability to adjust, (but) that adjustment has to be done with understanding.” While individual needs will dictate whether a transfer line or a bank of machining centres is required, the increased precision and reduced investment cost of machining tools makes a convincing case.

Lately, new factors like reclamation of swarf and coolant fluids has greatly improved. Nissan UK broke its targets by reclaiming between 95-100% of solid waste, and 1,000 litres of machining fluids per day, from its machining centres. The choice between the two machining formats still demands extended analysis before a final decision is made.