hief Executive of Bruel and Kjaer, called for ‘intelligent’ tools which would make sound and vibration testing equipment both easier to use and better at data collection.

“There is a definite need for innovation to provide better measurement techniques,” noted Hakonsson. “Many of the core analysis techniques such as Fast Fourier Transform (FFT) or digital filtering (octave analysis) are becoming commodity technologies - they are becoming mainstream.

“We need to put an emphasis on data handling. There is a need to streamline the whole process and provide tools that integrate into the company’s information network, allowing test results to be available throughout the organisation as soon as the measurements are taken.”

Hakonsson’s comments illustrated just how far and how fast testing had come since its introduction into the automotive industry.

With the success of digital testing in the aerospace and electronics sectors, it wasn’t long before carmakers brought in the technology to replace physical tests. Despite cautious observers believing that hard (physical) tests would always be required, bottom line cost won the day and virtual testing quickly went from being science fiction to science fact.

In a typical (physical) development cycle, there could be up to six versions of the end product involving up to 20 cycles of testing over a possible eight-week period. Randy Brunts, Manager of Systems Simulation and Modeling at Delphi Automation Systems, noted in 2002: “We find that if we test a product somewhere between two and three times we break even on our investment in the automation of that test. The cost saving is huge.”

But implementation of digital techniques threw up whole new areas of problem. “Traceable data formats are also essential,” said Hakonsson. “When large volumes of data are generated, the data must be easily stored and intelligently retrieved.”

The inherent complexity of the equipment also needed to be addressed, he said. “A common complaint amongst many NVH testing managers is the complexity and difficulty of using many of the larger test systems.

“The problem is that these test systems are very sophisticated. Many different customers use features and options, but rarely are all used by any one of them.” There is often a need to automate certain functions, he said, though he also noted that there was sometimes a need to create additional functionality.

From clay to Cray 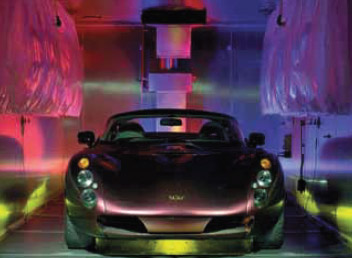 Following on from the data storage and retrieval problem, Hakonsson saw potential in companies moving away from the proprietary software driving previous-generation equipment, and switching to the more intuitive platforms offered by Windows NT or 2000.

Adding the Microsoft Office package meant that test results could be exported to Excel or Word, allowing ease of formatting and distribution.

In addition to reducing cost, Brunts claimed that overall quality could be improved with digital testing, and that the first person at the customer to realize that benefit was likely to be the manufacturing engineer on the shop floor.

“If you’ve got an eight-week test cycle and you are running six weeks late with delivery, then the thing that really suffers is testing. Hopefully what the manufacturing engineers will see when they get the product is that it has been completely tested because the tests are automated and can be executed very quickly,” he said.

Synonymous with quality in the virtual world is the high level of detail allowed by using software simulation. Not only is it possible to try an extended range of designs, in turn producing a betterlooking final product, but the greater the detail and the more data points that are available for analysis, the better the results of the software validation.

Following Ford’s purchase of Jaguar, virtual testing at the luxury car maker trebled year-on-year, according to Brian Nightingale, Corporate Technical Specialist for Body and Trim. “The level of detail that we are able to predict has greatly increased. The computing performance and capacity we use has gone up more than 100 times in six years.”

According to Nightingale, 15 years before OEMs would have concentrated on body stiffness and a limited number of durability issues. With the increased use of computer-aided engineering (CAE) validation tools, elements under examination had extended to include vibration performance up to 200Hz, crash performance and the performance of all trim.

But while some OEMs and parts suppliers were quick to take advantage of virtual testing, other customers were as yet unconvinced.

ArvinMeritor Exhaust Systems was keen to move to full virtual testing, said Gail Guynn, Senior Principal Systems Engineer at the company, but some of their customers were reticent.

“There is still a lot of customer-driven comfort gained from hard testing a part,” said Guynn. “Even if you say ‘here’s your virtual model, here’s your virtual product, here are your fatigue predictions, everything will be fine,’ they still want to see parts made and tested to feel comfortable with them.”

Whereas all areas of modern automotive production are subject to some form of testing of physical quality, the non-physical areas have come under equal scrutiny in recent years.

The quality of the aural track, the sound made by an individual vehicle, is a key factor in its appeal to the car buyer. As such, it was analyzed and altered using the same testing procedures found in the parts bound for the assembly hall.

NVH engineers balance interior and exterior noise to achieve brand-accepted levels of comfort and sound. Ranging from the audible ticking of the clock through overall engine noise to the satisfying sound of a well-constructed door meeting the frame moulding, these experiences must meet drivers’ requirements.

Magna Steyr was one company which led specialisation in this area. A team of acoustic engineers began benchmarking sound, from concept development, through prototyping to assembly. An example was the company adapting Mercedes Benz C-, E- and S-Class models to four-wheel drive, where engineers identified and eliminated drivetrain vibration in order to enhance the perceived vehicle quality. 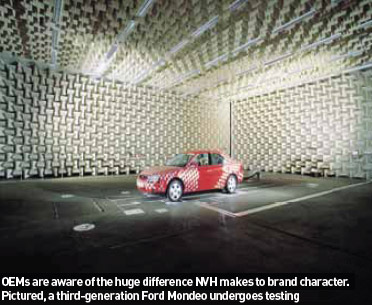 Another case of taking testing beyond body-in-white was Honda, which at its German R&D site carried out engine tests to determine powertrain improvements.

“We are here to inform our parent company in Japan of the powertrain development requirements for future vehicles in Europe,” explained Kotaro Yamamoto, Assistant Manager of Powertrain Engineering.

“Dynamic performance is, of course, a very subjective topic. But there are standard interpretations of key elements, such as standing starts and acceleration in each gear. We evaluate the performance of our powertrain against competitor products.”

Another growth area for testing has been emissions. As ultralow emissions came to play a significant role in all development programmes, the equipment to support such testing became equally significant.

“The engine management systems and associated electronics add a great deal of time and complexity to the calibration tasks,” observed Nigel Foxhall, Chief Engineer for Production Engines at Cosworth Technology. “The number of variables has increased dramatically, and this is driving techniques such as automated and statistical mapping.”

All this, was against a backdrop of OEMs insisting that companies supply engines ever more quickly to their production lines.

According to Foxhall, future engine testing will become more of a validation exercise, where many of the parameters have already been established through virtual techniques. As an example, he cites the computational fluid dynamics enabling engineers to test a range of performance elements prior to the physical construction of engine prototypes.

Testing is now all-pervasive among parts suppliers. UK-based Albion Automotive supplies crankshafts for BMW, DAF trucks and for engine specialist Perkins, among others. 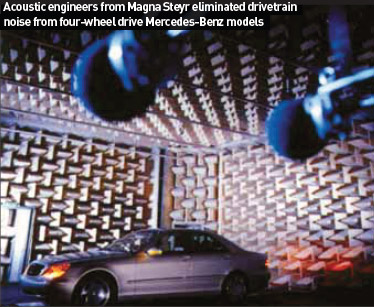 Dave Alty, manager of the crankshaft production facility, notes that it is not only the parts which go though a series of rigorous tests. “Our testing activities cover the machine tools and the measuring equipment…to ensure full process capability.”

Tests focus on parameters such as dimensional accuracy, form and surface finish. “We look at primary and secondary surface finish,” explained Alty, “and we have the capability to measure surface finish around the radius. All products are checked during production on the same set of coordinate measuring machines. For the BMW crankshafts, where volumes are around 90,000 per year, we can use more dedicated equipment.”

As testing gets better, so customer requirements increase. “The Cpk (co-efficient of process capability) requirement of our existing processes is 1.67, but our customers are now expecting us to work with a Cpk of 2.00 or more. This means new machines, new tooling and new processes. Old machine tools and processes simply can’t meet the target.”

By all appearances, neither can old methods of testing.