It's time to get personal 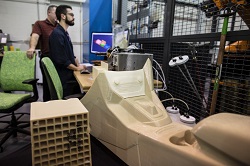 The advent of 3D printing has set the industry’s imagination racing with regard to how far this innovative technology could actually push technological boundaries, particularly concerning personalisation. We all love choosing the colour scheme, upholstery, wheels and trims for our new cars, so how great would it be if your local dealership could offer customised spoilers, consoles or dashboards?

You won’t need to imagine for much longer, it seems. Ford says it is now testing the 3D printing of large-scale car parts for commercial use, with personalisation and lightweighting in mind. Using a Stratasys Infinite Build 3D printer at its Research and Innovation Centre in Dearborn, Michigan, the OEM says it can make increasingly affordable parts, like spoilers, which will also weigh less than traditionally manufactured parts.

The concept of personalisation already exists in a number of consumer markets, so why not automotive? There seem to be very few reasons why it shouldn’t work. Certainly, there would need to be a few constants, such as fixing points and a maximum working envelope. Factors such as size would likely be in line with considerations for a safe operational downforce of parts such as spoilers, rather than machine limitations. As its name suggests, the Stratasys Infinite-Build 3D printer enables parts to grow horizontally out of the chamber for practically unlimited height.

Cycle times arguably remain the biggest challenge, although it has to be said that 3D printing rates are accelerating now that robotic arms are being used to replace the canister when raw material runs out, allowing the printer to operate unattended for days at a time. So, impatient car buyers wouldn’t have to wait too long for their personalised parts.

Additionally, minus the constraints of mass-production processes, 3D-printed parts can be designed to function more efficiently; a vital attribute of performance components such as spoilers.

So, if you fancy a tail like those on the Lamborghini Veneno, Porsche 911 GT3 or Subaru WRX STI, the manufacturing technology to facilitate such requests is seemingly just around the corner. Why not let your imagination run wild as we enter the age of mass personalisation?