Additive manufacturing technologies are now established as useful tools right across the automotive manufacturing sector. But inhibiting factors to their increased adoption include both their limitations in volume applications and a more misplaced perception that they cannot make highly robust parts 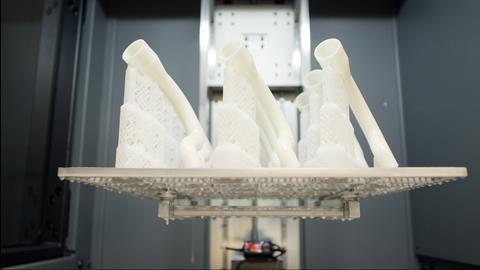 One company right at the forefront of changing perceptions of the relevance of additive manufacturing to meet even the most arduous application challenges is Egar Tool & Die in Cambridge, Ontario, Canada. The company is both a supplier of stamping dies for the manufacture of sheet metal components to both Tier 1 and Tier 2 automotive component makers and a user of its own die products to act as a supplier of such components itself.

The company has been in business for 40 years during which CNC machining has been the only method of fashioning die parts from the extremely tough ‘tool steel’ materials involved. But over just the last four of those years it has begun to supply additively manufactured metal die elements to customers made on one of its two Studio machines from supplier Desktop Metal.

Increasing use of additive manufacturing for tooling
The machines create parts from metal powders using a sintering technique followed by heat treatment in a desktop ‘furnace’. In that time the additive process has grown to be responsible for about 10% of the company’s total output of die components and end-of-arm tooling for the robots that handle tasks such as part removal from the dies after stamping, in what would otherwise be a hazardous task for human operators. It is also the reason why the company now has a director of Additive Manufacturing Colin Kools.

Interestingly Kools says that the Studio system is not the company’s first venture in the use of additive techniques. It had, he says, previously explored whether a system using polymer materials might have some more limited applicability but both the thermal and mechanical conditions involved in the stamping process made that unfeasible. But he says that even that initial exploration of the technology was nevertheless useful in “proving out the concept” in terms of its ability to make parts of the right dimensions. It also helped Egar take a lead in the use of metal-based additive techniques in which Kools is confident the company can claim to be “one of the first in its application area in Canada”.

But a basic question remains of deciding between the use of additive technology or CNC machining in any particular instance. Kools say that additive techniques win out where part complexity such as the need for integral cooling channels in a die element or the sheer speed with which a part is required are factors. He points out that the latter factor may involve not just immediate manufacturing concerns, such as the possible need for multiple set-ups in a CNC machining sequence, but also the logistics of procuring appropriate metal billets before machining even commences. In contrast, he says, an additive machine with its supply of powdered material is “ready to go” as soon as required.

The company can, of course, make decisions based on those factors where its own use of the technology is concerned. But, as Kools admits, persuading external customers of the merits of additive techniques is a different matter simply because of a generalised reluctance to move away from established procedures that he says is a characteristic of automotive manufacturing. Indeed, he goes so far as to say that this “education” task is probably the biggest challenge facing the company as it seeks to expand its use of additive techniques.

Kools certainly has no reservations about the ability of additively manufactured parts to meet the demands of die tooling applications. Such parts might already routinely have to withstand impact pressures in the region of 1,000lbs per sq.in. Moreover, this year he is already looking forward to starting to use an even more resilient D2 rated material that should provide an end part hardness of “55-57 Rockwell”.

Also, in a ‘back to the future’ move Kools says that the company is planning a little further ahead again to start using polymer-based additive manufacturing in the form of Desktop Metal’s Fiber system. The application area will, he says, not be die components but will include parts such as guards and shields to provide protection from welding operations. The key difference this time will be the ability to use materials with much higher thermal resilience than previously. 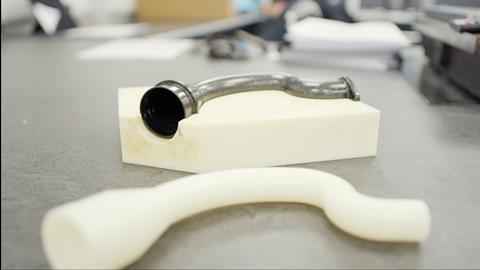 Creating versatile parts with liquid polymer
Meanwhile an innovative indeed pioneering use of additive manufacturing technology has recently been put into practice in the UK to serve the needs of component production for the most demanding of application areas – F1 racing. The work in this case has involved two companies – manufacturer of high-performance composite parts Silverstone Composites and provider of additive manufacturing services Mackart Additive located in Lichfield, Staffordshire.

Both are members of the Silverstone Technology Cluster, a grouping of companies in the wider area around the track that aims to generate a mutually supportive pooling of knowledge and expertise. In this case Mackart has utilised the latest generation of stereolithography (SLA) machines and materials from major supplier Stratasys to support a streamlined and efficient method of creating composite pipes that provides both faster processing and the highest quality levels.

SLA is the process by which successive layers of liquid polymer are cured by a traversing laser beam. In this application it has been used to manufacture the mandrels that provide the internal support structure around which uncured carbon fibre is wrapped before the heat process that hardens the material to produce the final composite part.

That use of additive technology is not new. What is new in this application is that after the heat process the internal additively manufactured mandrel can be withdrawn whole in a single simple procedure that may last only a few seconds. Previously it might have been necessary to dissolve it by immersing the whole assembly in a caustic solution – a process that could take as long as 48 hours.

The details are confirmed by Steven McCarthy, founding director and principal Technical Engineer of Mackart, though he stresses that the company is emphatically “not just a bureau but a mechanical engineering company with a specialisation in additive manufacturing”. The machine in this case, he says, was a Stratasys Neo450s that Mackart acquired just last October using the Somos DMX-SL 100 material.

But the essential point about that material in this application, says McCarthy, is not simply that it is tough but that it is still flexible at high temperature. This, as he further explains, is the property that has made this new application possible. “The resin is malleable at temperature but structurally stable,” he states. In practice, he continues, this enables the mandrel “to be used as internal bag so that from a mould tool point of view it becomes a malleable tool that follows the form of an external tool. But while the tool is still hot it can be extracted.”

Moreover, this capability is almost entirely independent of the geometry of the pipe. “It doesn’t have to be straight,” says McCarthy. Instead, it can be applied to what he describes as “wicked geometries” that may involve not just curves in the pipe but also changes in diameter and cross-section. “The internal tool conforms to just about whatever geometry you can devise and provides excellent consolidation of carbon fibre,” he states. The material can also ensure that the resulting part surface is smooth enough to be classified as an ‘A-surface’ in carbon fibre production terms.

Although it may not be immediately practicable as a volume production procedure McCarthy says there is no reason why the technique could not find applications right away for high-end on-road vehicles. “It can certainly provide the necessary quality and repeatability for CFRP components employed for supercars,” he states. 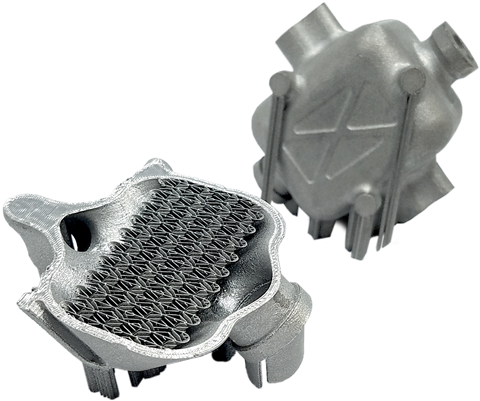 Improving repeatability and consistency
Elsewhere ‘repeatability’ is also a word used by Zach Murphree though from a different perspective. Murphree is VP of Global Sales and Business Development for Velo3D, supplier of the Sapphire laser-based metal additive manufacturing systems based in Campbell, California. He explains that the company has been in business for just eight years providing the core manufacturing hardware and integral software to support both ‘front-end’ and in-process operations.

Murphree explains that in the former case this means that the system effectively automates the design for additive manufacturing (DfAM) expertise that is often otherwise a matter of subjective expertise on the part of users and that in the latter it monitors parameters such as dimensional accuracy during build. The consequence of this, he says, is that the system can provide that repeatability not just on a standalone basis at a single location but when it is replicated at multiple locations. “Printing one part fast enough is not good enough,” he states. “You have got to be able to do it consistently.”

This approach is, Murphree further explains, fundamental to the company’s approach to the market and is just as much the case for automotive manufacturing where he acknowledges that any use of additive technology for high volume production is still not feasible. Instead, he says that the company expects in-car use of additive parts to remain largely the province of niche applications such as motor sports but that in more mainstream environments its use will be more as a support tool to make, for instance, jigs and tooling.

In the first of those areas the company currently has a development partnership with Australian manufacturer of heat exchangers PWR though fuller details are not yet available. In the second Murphree expects that the latest version of the Sapphire machine is likely to be significant. This is the Sapphire XC introduced just last year, which uses eight lasers instead of the previous two to produce parts that, he says, again have the same quality as if they were welded.

But the major differences are an increased ability to build larger parts made possible by a 600mm diameter base coupled with a Z-axis of either 550mm or 1,000mm and what Murphree says is massively enhanced level of performance. Moreover, material options of nickel alloys, titanium and aluminium have just been joined by copper. Further ahead, he adds, “we are working on tool steels and stainless steels.”