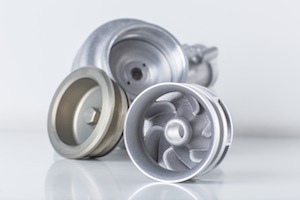 Germany – In 1990, the OEM’s Rapid Technologies Center in Munich commissioned the development of its first additive manufacturing facilities, and that year prototype parts were made on a stereolithography machine. Early examples featured on concept cars; BMW later developed further procedures and applications in line with component specifications.

Another milestone has been the application of additive manufacturing methods to the manufacture of metal parts, which requires greater expertise in process engineering. BMW now uses it for small series production, and for the past few years has equipped its DTM racecars with aluminium water-pump wheels made by this technique, fitting the 500th such component in April 2015.

“Components made with additive manufacturing give us a lot of freedom in the forming process; they can be produced both quickly and in appropriate quality,” commented Udo Haenle, head of production strategy, Technical Integration and Pilot Plant. “We see major potential for the future application in series production as well as for new customer offerings, such as personalised vehicle parts, or the spare parts supply.”

Haenle added that BMW’s Technology Office in Silicon Valley, California, is currently conducting a first test run for continuous liquid interface production (CLIP). “As a beamer is used for the exposure of the surfaces, CLIP is considerably faster than previous methods,” he states.