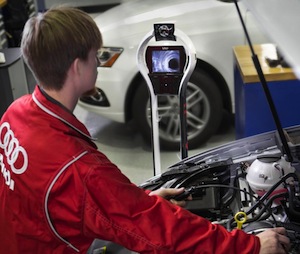 Germany – The OEM says it has already implemented some intelligent production processes but will introduce further innovations in the coming years. Audi’s vision for the future, discussed at its recent annual shareholders meeting, encompasses collaborative robots, 3D printing and cars driven from the assembly line in piloted mode.

An increasing diversity of products is leading to a more complex manufacturing environment for Audi and other vehicle-makers. “Automobile production as we know it today will no longer exist in the future. It will become more connected, more intelligent and more efficient,” remarked Hubert Waltl, Audi’s board of management member for Production.

Waltl added that personnel will continue to play a key role in driving manufacturing success but that “new specialists such as network architects will increasingly move into our industry”. He explained: “With their IT expertise, they will configure machinery so that all processes will be extremely well coordinated and the factory equipment will optimally support the employees.”

Audi has already implemented aspects of the smart factory concept, including an augmented reality tool called ‘Window to the World'. This system enables the projection of virtual 3D parts onto the car during pre-series work.

Meanwhile, in Audi’s tooling division, a 3D printer is being used to make complex metal parts and intelligent tools are distributing high-pressure forces precisely enough to stamp sheet-metal parts that are accurate to one hundredth of a millimetre.

Additionally, at the Ingolstadt assembly hall in Germany, intelligent robots are working alongside employees without a protective fence, handing over components at the optimum speed and angle.

Audi speculates that, in the longer term, manufacturing operations might consist of ‘competence islands’ instead of assembly lines, with materials transported by drones, and cars driving away from the hall in piloted mode.