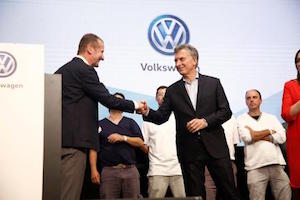 Argentina – The OEM said the plant would undergo “modernisation measures” costing the equivalent of $660m to optimise the production process, enhancing quality and sustainability while enabling it to make the new SUV by 2020. The introduction of the model, based on Volkswagen’s Modular Transverse Matrix (MQB) platform, will create around 2,500 jobs.

“Volkswagen believes in the great potential of the South American continent. The investments create the optimal conditions for the efficient production of our new SUV – built in Argentina for the markets in South America,” said Di Si, CEO of VW South America.The OEM has launched what it says is the largest product offensive in its history in South America, featuring 20 new MQB models, including a revamped pick-up range and more locally built SUVs. The company is reporting “a significant increase in deliveries” in the region, including a 60% jump to 36,000 units between January and October this year, and expects to be back in the black there by 2020, with Argentina and Brazil driving the growth.

“We are laying the foundations for the brand’s growth on international markets with Volkswagen’s Transform 2025+ strategy. South America and Argentina play an important role in this regard,” commented Herbert Diess, CEO of VW.

The Transform 2025+ plan is intended to refocus the business in line with world markets, delegating responsibilities previously controlled centrally from Wolfsburg. Regions such as South America will eventually be responsible for all business activities, including decisions relating to model range.