Volvo Torslanda shifts up a gear 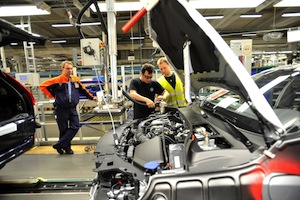 Sweden – The plant in Gothenburg will add a third shift and 1,300 personnel in the first quarter of 2015 to coincide with the production launch of Volvo’s new XC90 SUV. The move follows the opening of a new bodyshop in April this year which has raised the annual production capacity to 300,000 cars.

The XC90 will be the first model made using the Scalable Product Architecture (SPA) which will form the basis of Volvo’s upcoming range of vehicles. The new platform and the expansion of Torslanda are part of the OEM’s $11 billion investment programme in new products and production capacity.

As well as introducing a third shift, Torslanda will simultaneously implement a revised working agreement to support higher production volumes; the new agreement will improve flexibility in production to meet customer demand.

The extra personnel will boost the workforce at Torslanda by 40% to 4,600 individuals. In addition to the XC90 models, the plant currently makes the S60, S80, V60, V70 and XC70. The OEM expects deliveries from Torslanda to hit a record high in 2015.